Is Moscow metro the only profitable metro in the world?

Omsk Oblast first vice-governor Sineugin when explaining why they stopped building metro in Omsk, has claimed that Moscow metro is the only profitable in the world:

The first deputy governor believes that if there is no sense from the metro from the point of view of passenger flows, then "it's not up to the time now". When this time comes, it's hard to say.

"It will be possible to return to this project at some point, in the presence of certain circumstances or, for example, an investor, although there is not a single profitable metro in the world, except Moscow,"

concluded Sinyugin. (Google machine translation of the article "Sinyugin explained why the construction of the Omsk subway was decided to be frozen.")

I wonder whether it is the case.

No. It's not even the most profitable.

The MTR in Hong Kong is one of the most profitable metro systems in the world; it had a farebox recovery ratio of 187% in 2015, the world's highest (source).

I cannot find any current data, but back in 2011-2012 when Japan was considering fully privatizing its metro systems, reports were that they were profitable.

Tokyo Metro, which carries more than 6 million passengers each day over a 195 kilometre network of tracks, posted a 36.8 billion yen net profit for the financial year ended March 2011 on sales of 372 billion yen.

And this does not seem uncommon for Tokyo's system::

According to a Tokyo Metro public relations representative, 6.33 million people on average used Tokyo Metro’s nine subway routes, which together have 179 stations, on a daily basis in fiscal 2009, when it logged a profit of ¥63.5 billion.

Tokyo’s other major subway company, Toei Chikatetsu, which hosts four lines and is operated by the Tokyo Metropolitan Bureau of Transportation, averaged 2.34 million passengers per day in 2008, and made a profit of ¥12.2 billion in 2009. Toei Chikatetsu has 106 stations.

But despite the figures, both companies had long-term debts, ¥735 billion for Tokyo Metro and more than ¥1.1 trillion for Toei Chikatetsu, in fiscal 2009 — a result of the enormous sum necessary to construct and maintain their lines.

Both have pretty old infrastructure, comparable in age with Moscow's. Do note however the issue of long-term debt, for all the Japanese examples. This is unlike HK's but the latter has had a unique corporate structure...

Since the HK metro is an accepted answer, it bears reminid how it differs from almost any other metro (except one being built in Shenzen).

According to a 2015 CNN article, "How Hong Kong's subway turns a $2 billion annual profit" which frankly sounds quite astounding... but

How does Hong Kong's train and bus network manage to clear its mind-boggling margins?

First off, this is one impressive subway system. Even with more than 5 million daily commuters, MTR trains boast a 99.9% on-time arrival rate. Fares are notoriously cheap ($.50 to $3), but cover roughly 175% of the system's operating costs.

But the company's real profits are derived from a lesser-known side of the business: property development. Some 50 major properties across Hong Kong are owned, developed or managed by MTR, including two of the city's tallest skyscrapers.

"Sometimes critics say it's a property development firm doing a side business of rail," said Tim Hau, a professor at University of Hong Kong's School of Economics and Finance.

And more about the corporate model, now being emulated in Shenzen as well:

The most successful metro system in the world, in terms of profitability, is probably Hong Kong’s Mass Transit Railway corporation (MTR). By itself, that is not surprising. The system moves about 5 million people a day, roughly the same as the London Underground, but it has around half the track length to maintain: 210km compared with London’s 400km. What is surprising is the sheer scale of the difference. Although the level of MTR’s fares is around a third that of the London or New York systems, it made a profit of $2bn (£1.5bn) in 2015, news website CNN Money reported on March 30, 2015. By contrast, Transport for London covers only £4.8bn of its £10.2bn budget from revenue, according to figures on its website, and New York spends $2.5bn (£1.9bn) just to service its debt, according to CNN Money. [...]

The reason for this extraordinary financial performance was explained last June by Lincoln Leong, the chief executive of MTR, in an article he wrote for McKinsey, a business consultancy (Leong 2016). This attributed the corporation’s success in large part to a development finance model called “rail plus property”, or R+P. The idea behind R+P is the easier-said-than-done principle of capturing the rise in property values caused by a new metro line. Building underground railway systems is a notoriously expensive business but, even so, construction costs can be considerably less than the gross value uplift. In the case of London’s Crossrail system, for example, the development cost was £14.8bn but the total increase in property prices around its stations has been put at £35bn (CBRE, 2016). MTR has become adept at capturing this uplift. The system, as explained by Mr Leong, works as follows. For new rail lines, the government of Hong Kong provides MTR with “development rights” in the vicinity of its stations. If it chooses to exercise these rights, MTR pays the government the land’s market value without the railway and makes its profit from the higher value of the land with the railway. To maximise this revenue, MTR tenders for a private developer to partner with, builds an asset and takes a portion of the resulting sale or rental income. This then provides the money to keep the system operating with its celebrated efficiency as well as proving the capital for further extensions, sparing MTR from having to compete with every other public agency for state funding. For example, revenues from R+P developments along MTR’s Tseung Kwan O line, opened in 2002 to serve a new town in the New Territories, financed the entire £300m cost of the work.

And a somewhat crticial US/NY perspective, which roughly shows under what conditions metros can be profitable:

Detailed comparative analyses of New York City subways and four Southeast Asian transit systems revealed that Hong Kong’s subways are profitable because of high asset productivity resulting from a strategic “prudent commercial” design for high utilization and traffic density, a land-grant financing framework, more commercial freedoms, lower overhead costs and asset replacement needs. Conversely, Singapore and Taipei’s subways are operated by concessioned carriers (akin to New York’s historic IRT and BMT) and not actually profitable when government-provided initial capital construction funds are accounted for at typical government bonding interest rates. Infrastructure ownership was separated to attract investors and allow government-controlled carriers to function as quasi-private entities. Network design choices with consequences in density and utilization explain the higher productivity in Asia. New York’s system was not designed for maximum capital and operating cost-efficiency or productivity but to provide high coverage and service levels at lower traffic densities in a socially conscious and inclusive approach, whereas Taiwan and Singapore governments made design decisions and chose governance structures that enabled higher productivity. [...] Direct comparisons in performance, profitability, and productivity should be avoided unless care is taken to analyze impacts of governance, social contexts, design criteria, and reasons for their differences. Nonetheless, comparisons and benchmarking can yield valuable insights for operations improvement under prevailing local constraints. 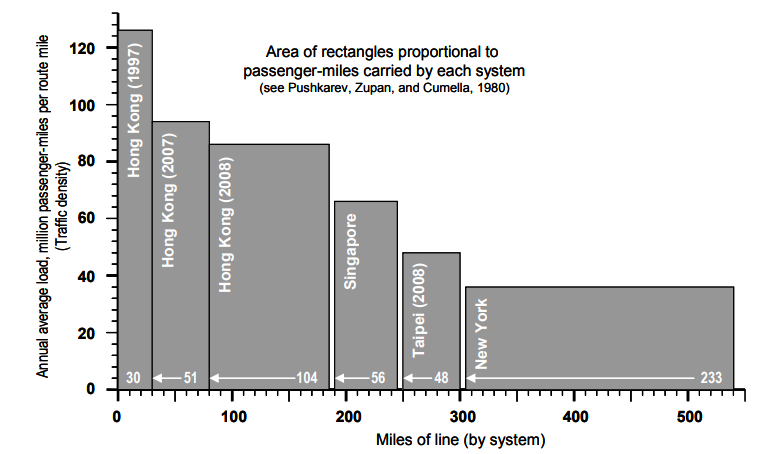 Basically amortizing the initial investment is really difficult for most metro projects. Do we consider for example that the Moscow metro was built in part with forced labor? Or that its construction meant causing starvation in other parts of the coutry?

The construction of the Metro was a major priority for Stalin, who saw it as a way to demonstrate the superiority of socialism over the capitalist world, which at the time was deep in the Great Depression.

The thousands of workers who dug the first subway needed to be fed, along with the tens of thousands who built massive steel plants and tractor factories during the same time. And the Soviets needed hard currency to buy foreign-built machinery for their new industries.

That meant taking the Soviet Union's grain harvest from the farming regions and leaving the people on the farms to starve.

If you consider grandafathered-in infrastrucutre not entirely built on market-economy terms, it's somewhat easier to claim profitablity.

Not the answer you're looking for? Browse other questions tagged economics transportation .

21
Does the Bilderberg Group have influence on world events?
19
Is the pharmaceutical industry the most profitable business in the United States?
36
Do wild dogs use trains to commute to and from Moscow?
15
Is climate change currently good for the world economy?
35
Does rubbing a rejected coin against the ticket machine make it likelier to be accepted?
9
Is Singapore the most expensive city in the world?
17
Is extreme poverty in the world getting worse?