Did some people in the UK get £100k in benefits?

According to Theresa May quoted in The Guardian, the government introduced Universal Credit because some people were getting up to £100k in benefits:

May says the government introduced UC because the “legacy system” left by Labour was flawed. Some people were getting up to £100,000 in benefits.

That seems like a grand claim to make. Is this accurate? Were some people getting up to £100k in benefits?

If you understand the phrase "some people" to refer to households, it is true.

Independent fact checking organisation FullFact got the data. The number of families receiving such a large amount of money seems to be about 5. Such large amounts are very rare. 80% of claims get less than £100/week (£5,200 per year). 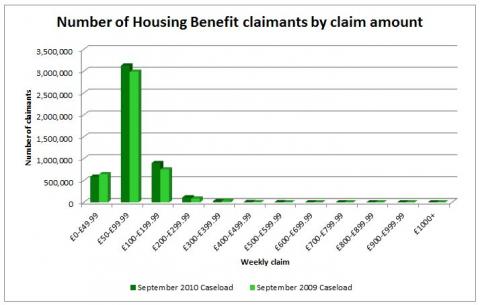 While the evidence suggests that there are a small number of Housing Benefit claims of more than £100,000 per year - perhaps around five - these cases are very much the exception rather than the rule. Focusing exclusively on these outliers without first putting them into context, where over 80% of claims are below £100 per week, could distort the debate around this important topic.

This Daily Mail article from 2012 describes one family getting benefits worth £95,000 per year.

Pete and Sam Smith receive £95,000 a year in state benefits to look after their ten children aged one to 15.

The couple have not worked since Mr Smith, 40, resigned from the Army in 2001 to care for his wife, who has curvature of the spine. At that time they had three children. The family receive child benefits, disability living allowance, carer’s allowance, tax credits and income support totalling £44,954 a year. They also have a £950-a-week bed-and-breakfast deal where the council pays for breakfasts delivered to their home.

This Daily Express article, also from 2012, says that a Freedom of Information Act request had found "at least 5 families" receiving in excess of £100,000 per year in Housing Benefit (so presumably they also receive other benefits as well).

21
Did Robin Hood exist and get buried here?
17
Did Richard Nixon commission a study on the effects of THC and then have the results classified?
8
Did Prime Minister David Cameron commit necrophilia with a pig's head?
28
Did non-voters outnumber the supporters of each political party in the UK in 2010?
0
Did the UK pay for the prince's wedding?
2
Were the Skripals attacked by use of Novichok?