Does this photo of the Brown Lady of Raynham Hall show a ghost?

Are there any ghosts that are captured on photos?

More specifically, I'm referring to this famous ghost picture of the Brown Lady of Raynham Hall: 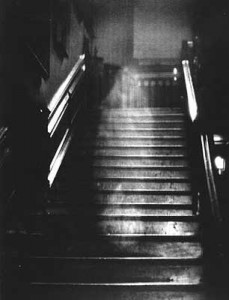 I've never heard anyone debunking the myth of this photo, but I think this picture is so famous that someone must have dug it out and made it a shooting target, no?

The "ghost" in question is known as the Brown Lady of Raynham Hall. And, although often still presented as evidence of the supernatural, it's also pretty well debunked — see this detailed article. In short, a 1937 analysis notes that there are other visual artifacts in the picture indicating a double exposure, but these are normally cropped out. But, even when one looks at the version you've posted, it's clear that the banisters have become crooked — the two exposures don't line up perfectly. Also the picture is generally printed very darkly, disguising the fact that it was taken at 4PM (and hiding more visual anomalies).

And finally, the smeary blur in the photo does not match previous "eye witness" descriptions of the ghost, which described a detailed and real-seeming person. Given that, were the ghost actually real, it would be awfully fortunate that she turned out to look just like a double exposure.

Not the answer you're looking for? Browse other questions tagged photography ghosts .

19
Is the climber's head-lamp backstory for this long-exposure photo feasible?
9
Is this a genuine photo of the supermoon over Gdańsk?
49
Is this photo showing a woman standing in the nude before teenagers real?
7
Does this photo depict a human flesh market during the Russian famine?