Recently the former prime minister of India Atal Bihari Vajpayee passed away due to illness.

Since then this meme has been circulating on social media: 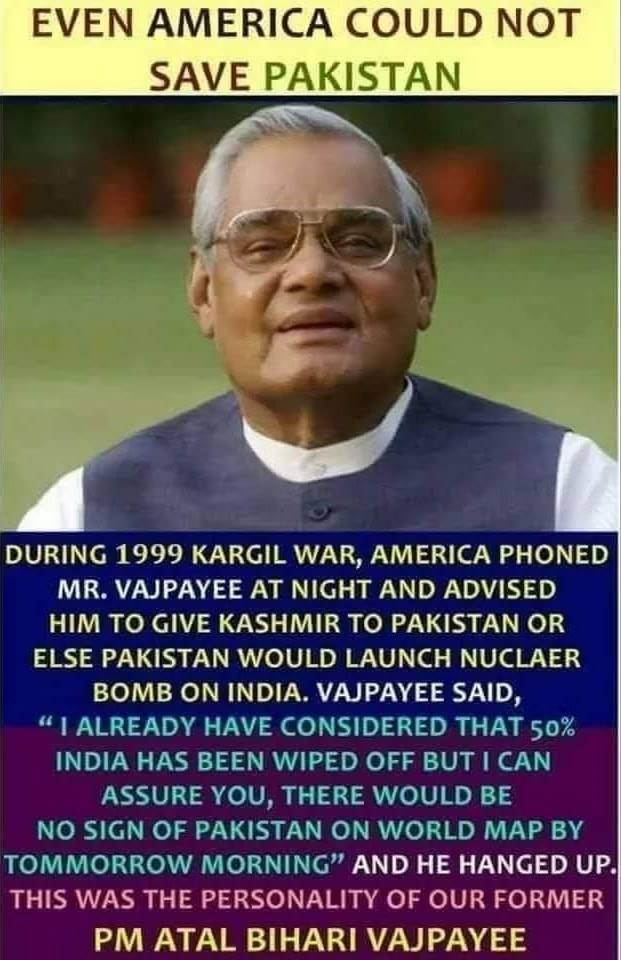 Even America could not save Pakistan
During 1999 Kargil War, America phoned Mr. Vajpayee at night and advised him to give Kashmir to Pakistan or else Pakistan would launch nuclaer [sic] bomb on India. Vajpayee said, "I already have considered that 50% India has been wiped off but I can assure you, there would be no sign of Pakistan on world map by tomorrow morning" and he hanged up.
This was the personality of our former PM Atal Bihari Vajpayee

Most likely made up in its entirety

While a story like this is easily gobbled up by people with nationalistic sentiments... it does not really paint any of the participants in a very flattering light. Diplomacy is rarely conducted like a shouting match by two teens in an [endowment]-measuring competition.

And there are some very iffy things about this meme. So even disregarding that spelling and grammar is atrocious — indicating this was thrown together in haste and without any effort — the claims lack factual support, and other descriptions of the diplomacy that took place during the 1999 Kargil War play out very differently.

The nature of the India-Pakistan conflict took a more sinister turn when the United States received intelligence that Pakistani nuclear warheads were being moved towards the border.

In a May 2000 article, Sanjay Badri-Maharaj claimed that India too had readied at least five nuclear-tipped ballistic missiles, but could not back up this claim with any official proof.[117]

Recently however, Pervez Musharraf revealed in his memoirs that Pakistan's nuclear delivery system was not operational during the Kargil war;[67] something that would have put Pakistan under serious disadvantage if the conflict went nuclear.

There were no senior government officials named "America" in Pakistan in 1999. So who is this "America" that supposedly called the Prime Minister and "advised" him that India should just give up Kashmir?

If we assume that this "America" is the president of the United States of America, then the whole meme is bogus. Clinton backed India in this and put pressure on Pakistan.

A much more detailed account of this can be found in this article from Yale Global.

On the eve of Sharif’s arrival, we learned that Pakistan might be preparing its nuclear forces for deployment. There was, among those of us preparing for the meeting, a sense of vast and nearly unprecedented peril. When Clinton assembled his advisers in the Oval Office for a last minute huddle, Sandy told him that overnight we had gotten more disturbing reports of steps Pakistan was taking with its nuclear arsenal. Clinton said he would like to use this information “to scare the hell out of Sharif.”

Clinton bore down harder. Having listened to Sharif’s complaints against the United States, he had a list of his own, and it started with terrorism. Pakistan was the principal sponsor of the Taliban, which in turn allowed Osama bin Laden to run his worldwide network out of Afghanistan. Clinton had asked Sharif repeatedly to cooperate in bringing Osama to justice. Sharif had promised to do so but failed to deliver. The statement the United States would make to the press would mention Pakistan’s role in supporting terrorism in Afghanistan—and, through its backing of Kashmiri militants, in India as well. Was that what Sharif wanted?

Clinton had worked himself back into real anger—his face flushed, eyes narrowed, lips pursed, cheek muscles pulsing, fists clenched. He said it was crazy enough for Sharif to have let his military violate the Line of Control, start a border war with India, and now prepare nuclear forces for action. On top of that, he had put Clinton in the middle of the mess and set him up for a diplomatic failure.

Sharif seemed beaten, physically and emotionally. He denied he had given any orders with regard to nuclear weaponry and said he was worried for his life.

So in light of this, any statement of the sort that Clinton would call up the Indian PM and tell them to hand over Kashmir to Pakistan sounds absolutely ludicrous. Clinton backed India in this, and beat up on Pakistan for playing a dangerous game of nuclear brinkmanship, especially so when not being in full control over their fledgling nuclear arsenal.

So who called who?

WASHINGTON: During the first week in June [1999], just as Milosevic was acceding to NATO’s demands over Kosovo, Clinton turned his own attention to India and Pakistan.

In letters to Nawaz Sharif and Vajpayee, the president went beyond the studied neutrality that both prime ministers were expecting—in Pakistan’s case with hope, and in India’s with trepidation. Clinton made Pakistan’s withdrawal a precondition for a settlement and the price it must pay for the U.S. diplomatic involvement it had long sought. Clinton followed up with phone calls to the two leaders in mid-June emphasizing this point.

The United States condemned Pakistan’s “infiltration of armed intruders” and went public with information that most of the seven hundred men who had crossed the Line of Control were attached to the Pakistani Army’s 10th Corps.

In late June Clinton called Nawaz Sharif to stress that the United States saw Pakistan as the aggressor and to reject the fiction that the fighters were separatist guerrillas. The administration let it be known that if Sharif did not order a pullback, we would hold up a $100 million International Monetary Fund loan that Pakistan sorely needed. Sharif went to Beijing, hoping for comfort from Pakistan’s staunchest friend, but got none.

Pakistan was almost universally seen to have precipitated the crisis, ruining the promising peace process that had begun in Lahore and inviting an Indian counteroffensive.

On Friday, July 2, Sharif phoned Clinton and pleaded for his personal intervention in South Asia. Clinton replied that he would consider it only if it was understood up-front that Pakistani withdrawal would have to be immediate and unconditional.

The next day Sharif called Clinton to say that he was packing his bags and getting ready to fly immediately to Washington—never mind that he had not been invited. ..He warned Sharif not to come unless he was prepared to announce unconditional withdrawal; otherwise, his trip would make a bad situation worse. The Pakistani leader did not accept Clinton’s condition for the meeting—he just said he was on his way.

There is no mention about any shouting-match in all of this, where supposedly one person calls Vajpayee and says "Give up Kashmir or you will get the bomb!" and the PM responds "We will bomb back more".

Not the answer you're looking for? Browse other questions tagged india .

5
Does this statue outside a school in India depict a Hindu Brahmin begging in front of Virgin Mary?

50
Has India invaded any country in the last 10,000 years?
15
Was the official language of the Union of India selected by a single tie-breaker vote?
8
When is the origin of Datura in India?
6
Are (former Australian Prime Minister) Tony Abbott's Indian Facebook likes fake?
31
Was this Indian from British India the first to strike Berlin during World War I?
3
Is this photo depicting Dalits from India genuine?
3
Was the Muslim population of India in 1850, 16% of the total population?
16
Was the Speed of Light known in 13th century India?
5
Does this statue outside a school in India depict a Hindu Brahmin begging in front of Virgin Mary?