According to 11 unique Ways To Increase Your Testosterone Without Steroids:

If you heat up your boys by wearing tight boxers or by taking long hot baths and showers, you are just basically lowering your testosterone levels.

Is that claim backed by good research?

Can't know what mysterious effects [tight] boxers might produce (since the boffins don't seem to care to test them directly), but since most (90%+) of testosterone is produced in Leydig cells, and these are not affected by temperature much

The influence of temperature on Leydig and Sertoli cell functions was investigated in two experiments. One experiment was performed with testes of men with or without varicocele, because the temperature differs between right and left testes of men with left varicocele and right testes of men without varicocele. There were no significant differences in follicle-stimulating hormone (FSH), human chorionic gonadotropin (hCG) receptors, and testosterone (T) concentrations among the testes. The other experiment was performed with the use of testicular organ culture. Specific binding sites for FSH, hCG, and T production were similar in cultured testes maintained at 33 degrees and 37 degrees C for 7 days. It is concluded that high temperature may not disturb Leydig and Sertoli cell functions in the short term. 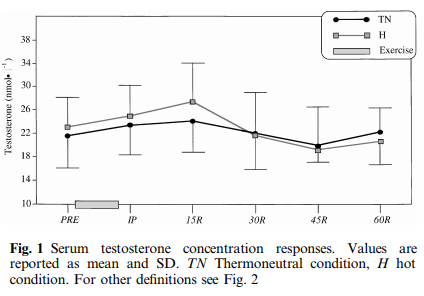 So what that means is that the claim about testosterone being affected by boxers' tightness is quite doubtful. As BradC notes, there is probably confusion with spermatogenesis in such low quality sources. Note that WebMD is talking about the latter (i.e. sperm production):

Have you ever heard the debate about whether men should wear boxers or briefs? It goes something like this: Briefs are tighter, so it's possible that they can raise your body temperature above the norm for sperm to survive. So if a guy wants to be really fertile, boxers are the way to go. Truth is, this has yet to be scientifically proven.

Not the answer you're looking for? Browse other questions tagged clothing testosterone .

27
Does wearing summer clothing during the winter increase your tolerance to the cold?
22
Was wearing trousers very low (sagging) invented in prison to show sexual availability?
3
Does snapping clothes before placing them in the dryer improve their drying?
4
Does high dryer heat shrink clothes?
14
Does wearing new clothes before washing them pose any health risks, like infection or skin irritation?
7
Do plastics lower testosterone?
11
Does putting silver into clothing reduce the amount of odor-causing bacteria?
7
Did Gigi Wu ("bikini climber") die of hypothermia because she was only wearing a bikini?