Recently in Australia some major supermarkets have begun phasing out disposable shopping bags.

A lot of people are saying things like that the new reusable bags are worse than the disposable bags.

There's also a lot of debate about whether the new reusable bags are better or worse than the old disposable ones. A cursory Google search has turned up results from hundreds to thousands of years for one of the reusable bags to biodegrade, and people say that the reusable bags must be used about 40 times before the environmental impact is equal.

Does anyone know how long it takes for a typical disposable plastic bag to break down is, and how that compares to reusable polypropylene bags?

I don't know exactly what Australia uses/mandates but since this was not tagged with a country... It really depends on the bag and the environment in ends up in, as well as the time-frame considered. An EU document on the matter from 2019 says/summarizes:

The European Union has recently banned the use of oxo-degradable plastics because of a lack of consistent evidence about speed of breakdown in the environment, and fears that false claims around this are misleading consumers. The directive 2019/904 came into force on 3 July 2019 and has to be transposed by the Member States by 3 July 2021. In addition, there are concerns that the ‘biodegradable’ label could lead to more littering, as consumers are more relaxed about discarding bags, rather than reusing them, assuming they will break down and pose no threat to the environment.

Five different types of plastic bag available from UK high-street retailers at point of sale were used in this study; this included two types of oxo-degradable bag (Oxobio1 and Oxobio2), one biodegradable bag, one compostable bag and one high-density polyethylene (HDPE) carrier bag. [...]

The biodegradable, oxo-degradable and conventional plastic bags all stayed functional in the marine environment and soil for the three years of the study and could hold 2 kilograms of groceries in them without breaking. The researchers highlight that the compostable bag remained intact in soil but was the only type of bag that completely disappeared from the marine pouch within three months. In air, the bags became brittle and formed smaller particles visible to the naked eye. Collectively, the results showed that none of the bags could be relied upon to show any substantial breakdown over a three-year period across all of the environments. The oxo-degradable or biodegradable formulations do not show sufficiently advanced rates of breakdown to have a clear advantage in terms of reducing marine litter compared to conventional bags.

In essence, the result of the paper cited is summarized in this graph: 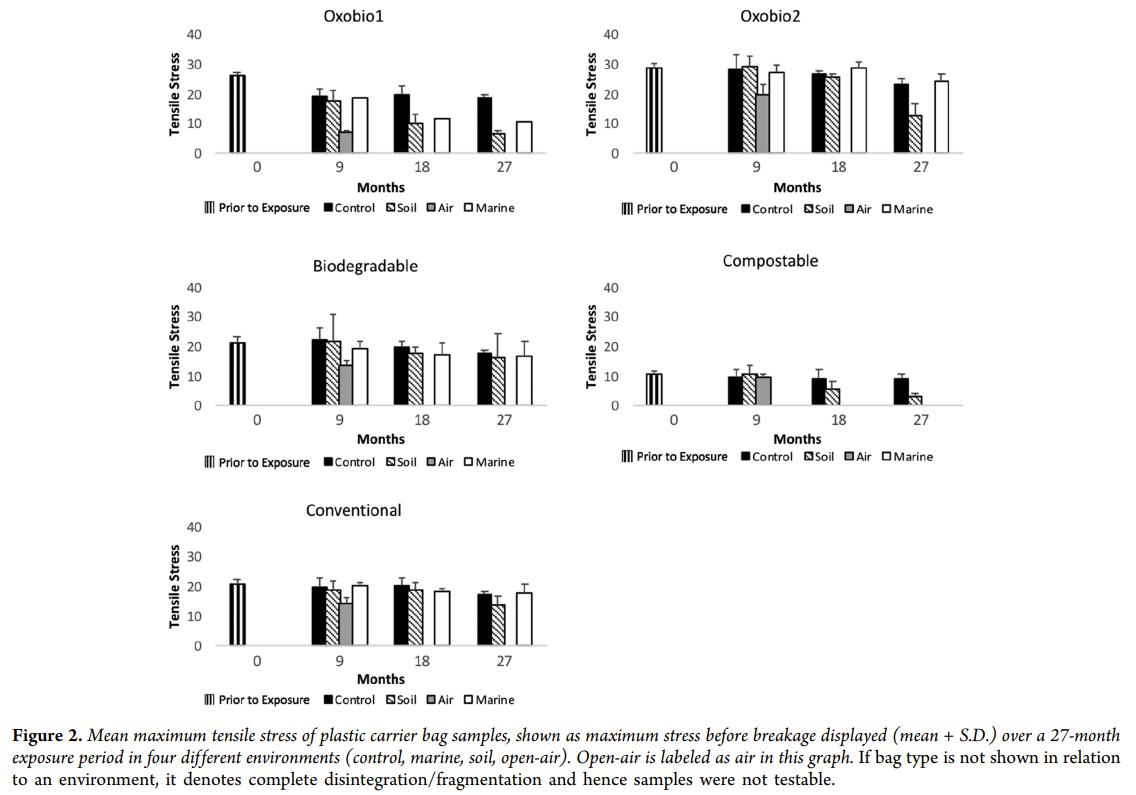 The types of bags tested are detailed in the following table, which alas doesn't get to some detailed chemical composition and just relies on (UK) labeling (click to zoom):

23
Is banning plastic bags beneficial to the environment?