US trade deficit and the iPhone

CNBC has an article arguing that the way the US trade deficit with China is quite misleading, particularly as to the ultimate source of the deficit, using the iPhone as an example:

Some $70 billion of the U.S. trade deficit with China [out of $375 billion] is from shipments of cellphones. But that $70 billion is not an accurate measure of the value China added to the cellphones it shipped to the U.S.

That's because the accounting used in the "official" trade statistics hasn't kept up with the growth of global supply chains, which source parts and raw materials from multiple countries to make a single product.

"About two-thirds of world trade now is involved in value chains that cross borders during the production process," said David Dollar, a senior fellow at the John L. Thornton China Center, in a blog post.

Each country that adds a link in the chain also adds a little value to the final product. But those intermediate contributions are rolled up into the final export value that tallied when the product reaches its final destination. As a result, much of that $70 billion U.S.-China cellphone trade deficit really comes from other U.S. trade partners, such as South Korea, Japan and Singapore.

Of the $1,000 retail price, about $370 represents the cost of making each phone, including parts and assembly costs, according to an analysis by IHS Markit. The most expensive part, the display, comes from Samsung Electronics in South Korea and represents about $110 of the final price of the phone.

Another $44.45, for memory chips, goes to Japan's Toshiba and South Korea's SK Hynix. Other suppliers, from Singapore to Switzerland, provide parts and components that are assembled by a contract manufacturer in China. But the value Chinese workers add by putting those parts together represents only between 3 and 6 percent of the retail price of the phone, according to the IHS Markit analysis.

When the assembled phone is shipped to Apple and its distributors in the U.S., though, the entire $370 cost of making it — including parts — is rolled into the "export value" and becomes part of China's total trade deficit with the U.S., even though much of the value was added by suppliers in other countries. [...]

That also means any tariff on Chinese shipments of iPhones to the U.S. would also hurt the countries caught in the middle of that supply chain, as well as the American consumers who would pay more for the phone.

Is this analysis correct, i.e. are the (mostly non-Chinese) parts really counted as Chinese exports? If so, then is the conclusion (of the article) that the received way trade deficits are accounted for is nowadays obsolete? Do (most) other economists agree with this?

A bit more searching found that there's a more academic version of this notion called "trade in value-added". It's covered, for instance, in chapter 3 of a WTO-published book. They note something similar to the CNBC's conclusion that:

Global imbalances: accounting for trade in value-added (specifically accounting for trade in intermediate parts and components) and taking into account “trade in tasks” does not change the overall trade balance of a country with the rest of the world – it redistributes the surpluses and deficits across partner countries. When bilateral trade balances are measured in gross terms, the deficit with final goods producers (or the surplus of exporters of final products) is exaggerated because it incorporates the value of foreign inputs. The underlying imbalance is in fact with the countries that supplied inputs to the final producer. As pressure for rebalancing increases in the context of persistent deficits, there is a risk of protectionist responses that target countries at the end of global value chains on the basis of an inaccurate perception of the origin of trade imbalances.

So I guess this makes the notion more mainstream than one journalist's article. But is it widely (enough) accepted as a superior approach to trade relations/deficits? (There's no Wikipedia page for it that I could find, although OECD has one.)

It looks like CNBC the analysis is correct as far as the parts accounting is concerned just from the general definition of "trade in value added" -- TiVA as accounting for precisely this components issue not accounted for in the usual/gross trade balance.

On the other hand, the same WTO book gives us a reason why we don't hear more often about this TiVA issue when it comes to US-China trade balance: while there's some reduction in the US deficit with China this way, it seem it's not enough to knock off China from the top list of the US trade deficit. The data I found in the WTO book is fairly outdated (almost a decade old), but I suspect it doesn't change the qualitative conclusion:

China’s bilateral trade: Global value chains in a changing world surplus with the United States was over US$ 40 billion, or 25 per cent smaller in value-added terms in 2009 and 30 per cent smaller in 2005. This partly reflects the higher share of US value-added imports in Chinese final demand but also the fact that a significant share (one-third) of China’s exports reflect foreign content – the “factory asia” phenomenon. The data illustrate that significant exports of value-added from the Republic of Korea and Japan pass through China on their way to final consumers, resulting in significantly smaller Chinese trade deficits with these countries but also typically higher Japanese and the Republic of Korea’s trade surpluses with other countries. 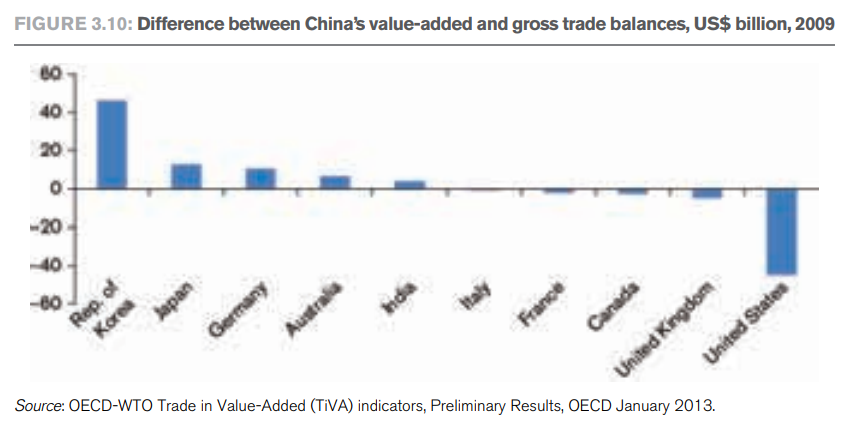 If we carry over the 25% reduction (using TiVA) to the present (gross) deficit with China of $375 billion, it's still not enough of a reduction to knock China of the first spot in the US trade deficit list (TiVA-adjusted). The next country is Japan with some $69 billion gross deficit. Even if this goes up by some 10-15% (using TiVA) it still does not catch up with the (TiVA-reduced) deficit that US has with China. I'm guessing that's a reason why TiVA is appealing to economists at OECD or WTO but it doesn't make it much to the press for the general public.

So the CNBC article is somewhat misleading in letting us think that a component-based analysis is a game changer when it comes to US trade deficits (with China). It is correct in its conclusion that there will probably some less obvious victims ("collateral damage") of a US-China trade war.

Not the answer you're looking for? Browse other questions tagged united-states economics china trade .

28
Are Fair Trade products guaranteed to be 'fairer'?
20
Is 90% of world trade conducted on WTO terms?
1
Quasi-consensus among economists that neither trade deficits nor surpluses are necessarily 'good' or 'bad' for an economy?
6
Is only 13% of the UK economy and only 8% of its businesses involved with european Union trade?
9
Did the USSR government trade 17 submarines and three warships for three million dollars in Pepsi?