Do one in three workers in Romania work for minimum wage?

Romania is a country viewed as an economic miracle in the European Union.

The statistics are clear: the country is booming.

But a closer look inside Romania reveals a shocking reality - crippling poverty, widespread labour exploitation, low purchasing power and a mass emigration by working-age citizens from all its regions.

How has the country become an economist’s dream and a worker’s nightmare?

A key reason is that Romania is a country of a cheap and flexible labour force, where most workers are defenceless in the face of their employers, and the minimum wage is a reference salary for millions.

With one in three Romanians trapped in a contract on the lowest possible salary, this country contains a dumping ground of cheap and desperate labour within the EU. […]

Labour researchers believe over 40 per cent of workers in Romania are on the minimum wage, if unofficial jobs are factored into the figures. Meanwhile, the latest Government data shows that around 30 per cent of total contracts pay the national minimum wage or under. This is still a massive number, and contrasts with nine per cent in Germany. […]

Now close to a third of the workforce receive the minimum wage - 1,846,498, if registered freelancers are included. “We are paid as if we were a country of unqualified workers,” complains the trade unionist.

There's some obvious left-leaning tone to that article, so I'm a bit skeptical of the claim that 1/3 of Romanian's work for minimum wage. In the US for instance it's like 2.7% at or below minimum wage. So is it true that in Romania 1/3 of the working population is on minimum wage?

(FYI: It was easy enough to find on Wikipedia what the minimum wage is in Romania; €413 per month since Jan 2018 but only €320 at the above article was written. But there's no info on Wikipedia how many people earn that. Also I found an article saying that the increase is fairly misleading as it involved more taxes as well, so the net increase was only 4.3%, but still no confirmation how many Romanians were on minimum wage.)

The official statistics published by the European organisation Eurostat say this:

Proportion of minimum wage earners
The proportion of employees earning the minimum wage can vary considerably across countries. By linking microdata from the two latest four-yearly structure of earnings surveys (SES) with the level of minimum wages in force at the time (October 2010 and 2014), it is possible to derive an estimate of these proportions (as presented in Figure 4). For the sake of comparability, the scope has been restricted to full-time workers aged 21 years and over, working in enterprises with 10 employees and more, excluding public administration, defence and compulsory social security (NACE Rev. 2 Section O). Moreover, monthly earnings calculated from the SES exclude any earnings related to overtime and shift work.

That would make this number quite high, although lower than compared to the original claim. However, the claim is about statistics and definitions. Those can change and are sometimes interpreted differently. This is crassly demonstrated when comparing unemployment rates for example. For example ILO definitions are completely different than what national statistics suggest.

The claim itself continues with

Now close to a third of the workforce receive the minimum wage - 1,846,498, if registered freelancers are included. “We are paid as if we were a country of unqualified workers,” complains the trade unionist. […] Labour researchers believe over 40 per cent of workers in Romania are on the minimum wage, if unofficial jobs are factored into the figures. Meanwhile, the latest Government data shows that around 30 per cent of total contracts pay the national minimum wage or under. This is still a massive number, and contrasts with nine per cent in Germany. From: How Romania sold out its workers to foreign investors for IMF and EU cash

That illusory precision number of "1,846,498" and "believe" seem in stark contrast. But as definitions vary, the following can also be hold "true":

The conclusion
seems to be that: No, not according to official European statistics. And at the same time: Yes, going by the definitions labour researchers use that figure is probably in the right ball park.

How are these numbers counted? Who is included and why? Are all "workers" included or only those with official contracts, just employees or self-employed and freelancers as well? Are those contracts officially registered and paying out the right amount or only parts of that or are there jobs as part of the unofficial shadow economy? There are reasons to opt for one or the other definition, ranging from legitamate and well-argued for to manipulatively suggestive.

That may sound surprising and difficult to understand, but one such paper arguing in a similar direction reads:

According to a Romania Country Report (2015, p.20-21), “wage growth has been moderate but uneven, with the wage distribution becoming increasingly compressed at the bottom due to strong increases in minimum wages. It has been increasing sharply since 2012 and is expected to reach close to 48% of average gross earnings at the end of 2016.”
Approximately 2.4 million Romanian workers representing 40% of total active employees received the minimum wage or less in 2015. Of these workers, 1.6 million were full-time workers, and 0.8 million were part-time workers. If the wage achieves 46% of the gross average earnings, it will not have the capacity to guarantee the minimum standard of living for employees. A portion of these workers is paid at the minimum wage or less to avoid a tax payment to authorities.

Adriana Anamaria Davidescu & Friedrich Schneider: "Nature of the Relationship between Minimum Wage and the Shadow Economy Size: An Empirical Analysis for the Case of Romania", IZA DP No. 11247, 2017.

I suspect there are some substantial variations in definitions used, but the IMF paper that was referenced in a quote by LangLangC, says 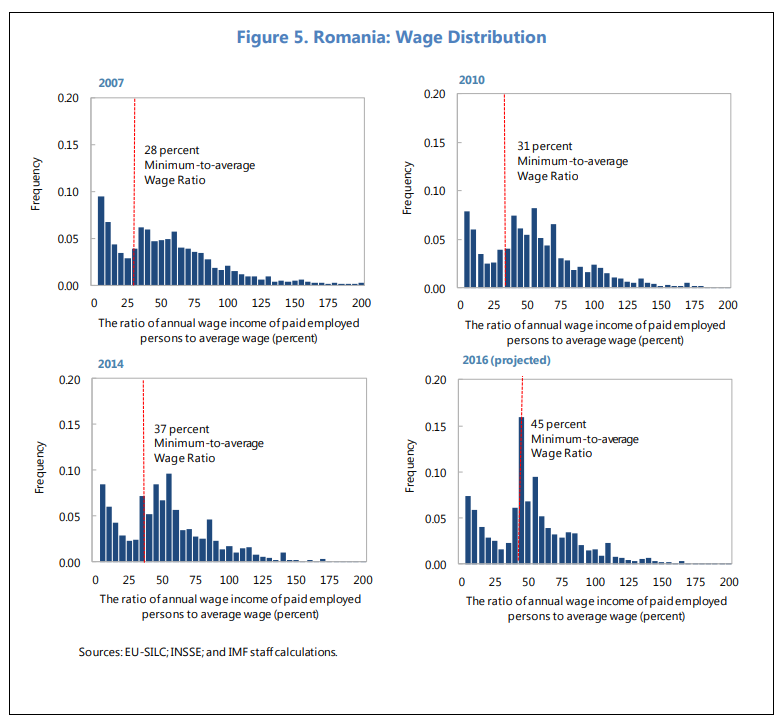 I'm a little confused here how the minimum-to-average wage ratio (from figure) becomes the ratio of workers who earned the minimum wage in their comment/text… But it does point to an increasing share of workers being on minimum wage. This trend is repeated earlier in the IMF paper, but with different figures:

Minimum wages often affect relatively more workers in CESEE than in Western Europe. Incidence varies widely across the region ranging from 6 percent of total employment in Estonia to 35 percent in Turkey in 2014. Lithuania and Poland (9 percent), Latvia (15 percent), and Romania (22 percent) are in between. Moreover, minimum wage hikes since 2014 are set to increase sharply the share of workers on minimum wage, for example to an estimated 20 and 60 percent for Lithuania and Turkey, respectively. This compares to incidence rates of less than 5 percent for the U.K. or the U.S. and around 10 percent for France and Germany.

So if Lithuania was estimate to go from 9% to 20% perhaps it's not too outlandish that Romania could see an increase from 22% to somewhere around 1/3. Still the large absolute differences between IMF and Eurostat (for the same year, 2014) are pretty weird. Actually annex V of the IMF paper goes to some extent toward explaining the differences; their data comes from a survey rather than some total numbers:

The EU-SILC is the EU reference source for comparative statistics on income distribution and social exclusion at the European level. Romania’s EU-SILC data are provided through the National Institute of Statistics of Romania (INSSE). [...] In 2014, for example, there were 7,508 households or 15,661 persons interviewed in the survey. Of those, 2,499 persons were unemployed and 13,162 persons were either employees or self-employed. This study considers only those employed on payrolls—6,836 persons accounting for about 43.6 percent of the sample in 2014.

... so IMF also excluded freelancers who would not be on payrolls (but they still got to some 22% at-or-below minimum wage even just with payrolls.) Frankly the number of people making income but not on payrolls is pretty shocking in itself: there's almost 1:1 (well something like 0.92:1) parity between self-employed (6,326) and payroll (6,836) in this sample. This is also huge if you compare it with the US self-employment percentage, around 10% for 2015.

Also @Gábor makes a good point that the official figures are not the whole story. The IMF paper further discusses the "shadow economy" in Central and Eastern Europe, although there's little direct data for Romania in particular:

The large size of the shadow economy in CESEE offers ample scope for circumventing minimum wage regulation, limiting their benefits in terms of workers’ actual remuneration. While estimates vary, 10-30 percent of economic activity in CESEE is thought to take place in the shadow economy in order to avoid taxes and regulations (Schneider, 2015; Putniņš and Sauka 2015; and Žukauskas, 2015). Over the past decade, the relative size of the shadow economy has decline somewhat across the region as income convergence advanced, but it remains large.
Minimum wage violations principally take three forms. First, “envelope payments” are quite common in the region, affecting an estimated 11 percent of workers and accounting for two fifth of their total pay in Central and Eastern Europe (Williams, 2009) and between 12 and 20 percent in the Baltics (SEE Riga, 2015). Minimum wage hikes may result in a reshuffling between official and unofficial pay, without affecting actual remuneration. Indeed, regularization of “envelope payments” could even reduce net pay as tax and social security deductions rise. Second, underreporting of hours worked is also widespread, possibly by as much as 13–20 percent in the Baltic countries (Žukauskas, 2015). Again, minimum wage hikes could be effectively offset by commensurately reducing official hours worked. Third, minimum wage hikes could prompt firms to entirely move from the formal sector to the shadow economy.

Evidence for CESEE suggests that minimum wage increases exacerbate noncompliance. Non-compliance is hard to measure directly, which is why the literature has focused on proxies, such as labor market participation rates, hours worked, incidence of part-time work, and the use for cash. For CESEE countries during 2000–14, changes in the minimum-to-median wage ratio exhibits correlations with changes in these proxies consistent with the hypothesis that minimum wage hikes increase shadow economy activity. Higher minimum wages go together with more part time work, lower labor force participation, more cash use, and less hours worked per employee. While none of these individual relationships controls for other influences or is statistically robust, jointly they are nonetheless suggestive of increased informality undermining the effectiveness of minimum wage policy to some extent.

Not the answer you're looking for? Browse other questions tagged economics europe romania .

18
Will introduction of a minimum wage increase unemployment?
29
Do performance incentives work for knowledge workers?
17
Do minimum wage laws disproportionately harm black employment?
30
Could McDonald's pay a $10.10 minimum wage with an increase of only 4¢ per meal?
26
Are Fairtrade farmers paid worse than other farmers in the same regions?
3
Did increase in minimum wage cause a decrease in crime in NYC?
147
Are there 96 million workers in the US who want a job and can't get one?
5
Do Low-skill workers earn one cent in extra income for every 19 cents the government spends on walling off Mexico