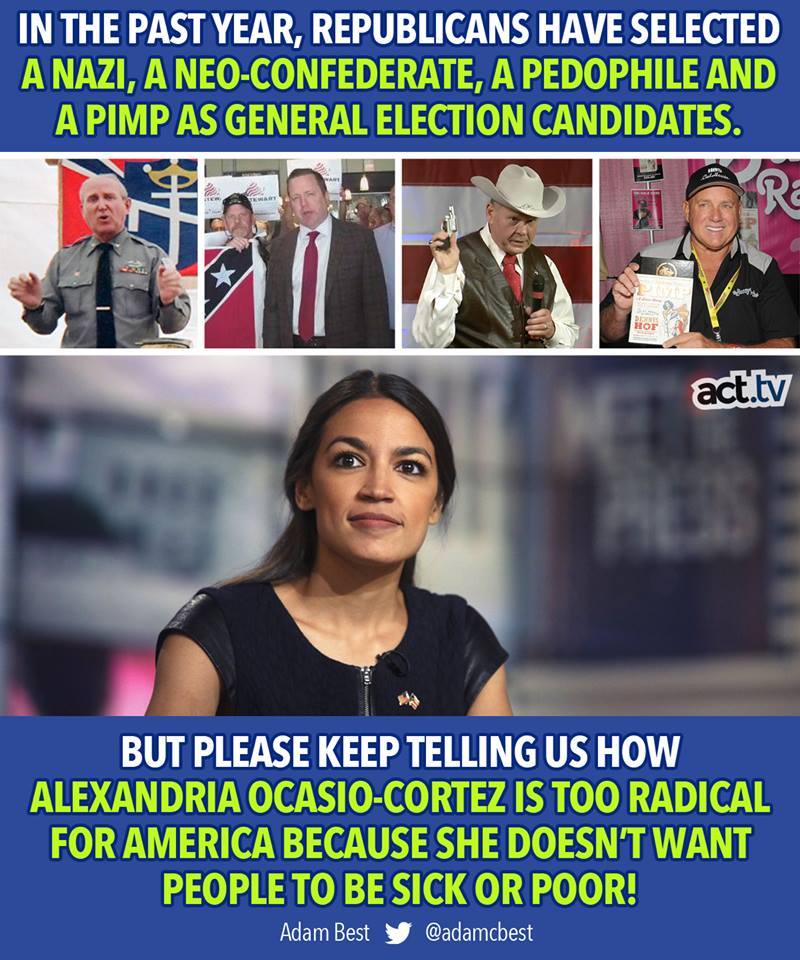 In the past year, Republicans have selected a Nazi, a neo-Confederate, a pedophile, and a pimp as general election candidates. [Pictures of presumed GOP candidates and of Ocasio-Cortez] But please keep telling us how Alexandria Ocasio-Cortez is too radical for America because she doesn't want people to be sick or poor!

According to Google's reverse image search, the 4 photos are of the following people:

Devils advocate, I'm going to somewhat dispute the "replublicans have selected" part of the claim.

Basically it was an extremely safe Dem seat with basically zero chance of a Rep winning... so they struggled to find anyone willing to run as a Rep, he put himself forward with nobody to oppose.

Jones, whom the GOP has denounced as a Nazi and who has a section on his campaign website devoted to denying the Holocaust, was unopposed in the primary and won the Republican nomination to represent the Illinois 3rd District in Congress.

And from this article.

“Even if only myself and my wife voted for me, I’d win the primary because the Republican Party screwed up big time,” Mr. Jones said in an interview.

The Illinois Republican Party has sought to distance itself from Mr. Jones in recent weeks, blanketing the district with campaign fliers and robocalls urging voters to “stop Illinois Nazis,” according to a robocall script provided by the party. Mr. Jones said he had received three robocalls himself.

“Arthur Jones is not a real Republican — he is a Nazi whose disgusting, bigoted views have no place in our nation’s discourse,” Tim Schneider, the Illinois Republican Party chairman, said in a statement. He said the party had urged voters “to skip over his name when they go to the polls” and moving forward planned on “vehemently opposing Jones with real campaign dollars.”

A spokesman for the Illinois Republican Party said those dollars would be used to support an independent candidate in the November general election. Party leaders are in talks with several potential candidates, the spokesman said, but have not yet decided which one to endorse.

So... he basically selected himself and then the GOP campaigned against him.

As for Corey Stewart there's been some accusations of strategic cross-party voting in the primary... and some examples of people simply boasting about it but it's basically impossible to know how much of the primary vote was "strategic" voting to try to get the least electable candidate on the oppositions ballot.

For the other 2 I can't find equivalent claims.

1
Did Republicans cut the budget of NIH and CDC in years leading up to Ebola?
8
Did a man get heckled for dressing up as a Nazi—and dressing up his son as Adolf Hitler—at a local Halloween event in 2018?
142
Did Republicans take 10 of 13 Congressional seats in the 2018 North Carolina general election with roughly the same number of votes as Democrats?