Did NASA use CGI for the Apollo mission trainers?

The Ohio State "Press Book", Computer Graphics and Computer Animation: A Retrospective Overview talks about the training simulators used on the Apollo projects:

The visual images for the Apollo trainers, and the later Shuttle and Skylab trainers, moved to an entirely digital control. Window scenes were entirely computer generated. Coupled with sophisticated image processing techniques, the simulations could not only represent the environment of Earth and near space, but also the surfaces and environments of the Moon and Mars and other celestial bodies.

Is this paragraph truthful? Are there examples of the quality of this CGI?

There is detailed information in the March 1973 NASA report APOLLO EXPERIENCE REPORT - SIMULATION OF MANNED SPACE FLIGHT FOR CREW TRAINING:

Both the TV/model and electronic image techniques have produced satisfactory displays for station keeping and docking. In the EIG technique, complex shapes cannot be drawn; therefore, realism is significantly less. Conversely, the EIG is a much simpler system to maintain and operate.

Two general techniques have been used for target-vehicle simulation: a direct analog system of closed-circuit TV and models, and an electronically generated (drawn) image. In both systems, the input to the display system was through a CRT in the infinity optics systems. The electronic image generator (EIG) was used successfully in one of the Gemini mission simulators, in the Gemini part-task trainer, and in the LMPS. In the EIG system, the target vehicle was drawn on the face of the CRT. The outline or envelope of the target was drawn at a 60-hertz rate; however, the surface was filled in at a 15.75-kilohertz rate. The image generation contained nine degrees of freedom and produced such phenomena as line-of-sight blanking, illumination shadowing, and perspective distortion. Simple target shapes (cylinders, cones, and others) as well as combinations of these shapes were readily simulated with simple surface markings and details.

Landing scene simulation was required only in the LMS for training in the lunar approach and landing phases. The altitude range desired was from a high-gate or breakout altitude down to and including touchdown. The scene was required to provide the crewmember with attitude and altitude information plus pertinent surface-feature details. In all other programs (for instance, during earth entry and landing), there was a minimum of crew activity relative to the window displays; therefore, little or no external scene simulation was supplied. In the LMS, the requirement was defined as a continuous scene from an altitude of approximately 15 000 feet to touchdown. The original requirement at the time of simulator procurement was for a generalized lunar surface containing representative features of the moon. This requirement was expanded subsequently to include modeling of the actual landing sites. Three-dimensional surface detail was required when surface irregularities became visible to the crewman. For the lunar landing simulation, the attitude at which surface features became important was defined as 2000 feet. An additional requirement was the casting of shadows such as would be caused by local surface irregularities when illuminated with collimated sunlight.

As initially delivered, the LMS was designed to meet the specified 15 000-footaltitude range capability with a combination of the closed-circuit TV/film technique described previously for near-body scenes, and a relatively conventional closed-circuit TV/3-D model system. This model system, known as the landing and ascent (L&A) system, was used below 1200 feet. The model was 1:1000 scale with three typical terrain types arranged in 120 [degree] pie sections; one each for hummocks and small fissures, boulders and large fissures, and craters. The distribution of these features was such that approximately 35 percent of the surface could be used for landing. Shadows were simulated by painting the model. The solar elevation angle was assumed to be 45 [degrees] . Overall, this system was determined to be inadequate for training. The major shortcoming was the lack of continuity from breakout to touchdown caused by the film system problems mentioned in the discussion of near-body scenes. An additional shortcoming was the lack of realism in the landing area model. An upgraded system, which used a 3-D model from breakout altitude to touchdown, was developed for training of the first lunar landing mission crews. Maximum altitude of the model simulation was increased to approximately 12 000 feet, and the model scale was established at 1:2000. Two significant features were added - an accurate model of the targeted landing area and a collimated light source to illuminate the surface and produce lunar-terrain shadows.

Two LMS's (fig. 4), one located at MSC and the other at KSC, provided the training for the LM portion of the Apollo missions. The two simulators were designed, built, and maintained to be identical. They consisted of an instructor and operator control console, an infinity optics display system for complete out-the-window scene simulation, a high-fidelity representation of the LM crew station, and a three-machine digital computer complex. The digital computers were the same as those used in the CMS. Also as in the CMS, one computer was assigned exclusively to simulation of the onboard guidance computer. A significant portion of the LMS, which provided training for final touchdown, was the L&A visual display system. This system included a lunar terrain model (scale 1:2000) of the specific landing site for each mission. 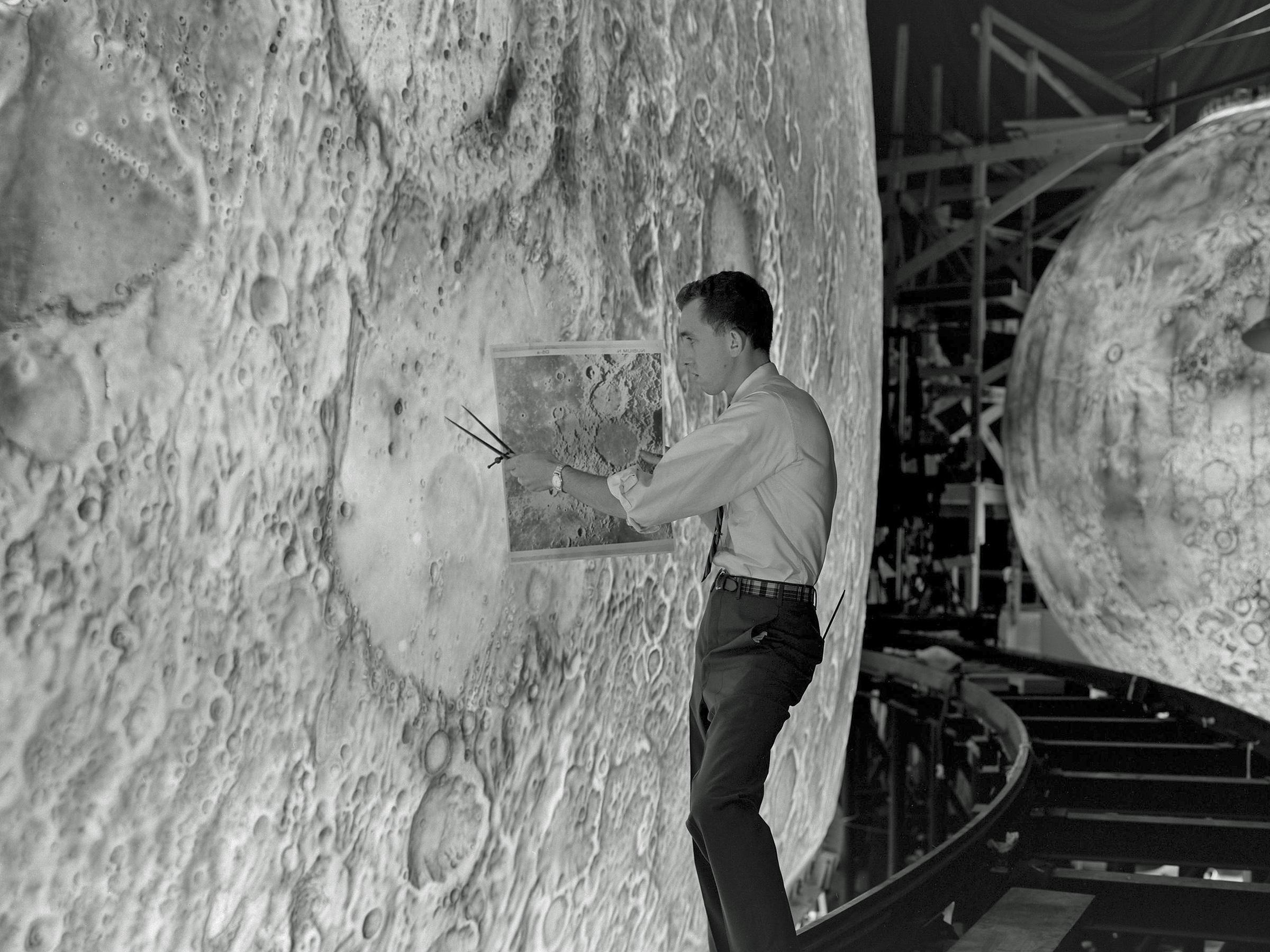 So in conclusion, primarily the simulators relied upon three dimensional models of the lunar surface for imagery, with computers controling what views of models would be seen at a given moment. While NASA did have the ability to generate images electronically, the resolution was very low.

The page that you link to only weakly references this NASA page, which in turn is a digital version of a part of a book: Encyclopedia of Computer Science and Technology, Volume 18, Supplement 3

The only showing of anything that can be considered a rendering of an alien world such as the Moon or Mars is at the bottom of the page. 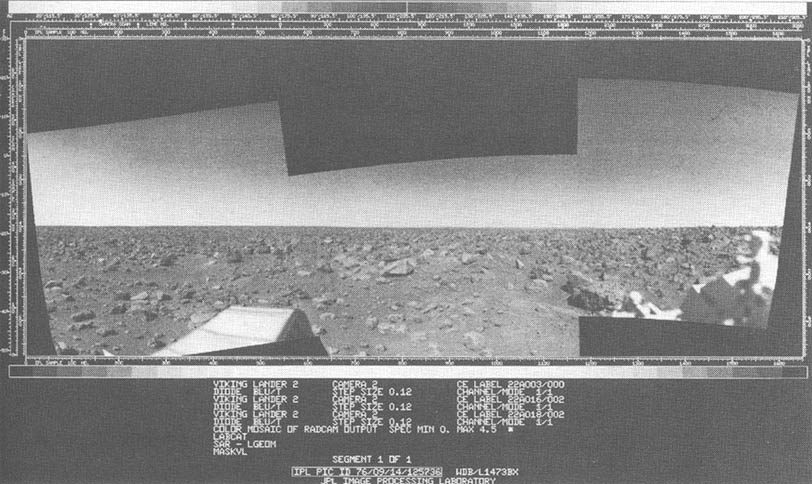 The image caption is: "Image processing makes possible scenes from alien worlds such as this panorama of the Martian surface."

So that image is not evidence for that CGI for the Apollo simulators was advanced enough to provide photo-realistic simulations of the Moon.

The only mention to image rendering that is made is this passage:

That is to say it was not until the Shuttle Program that there was CGI — of any sort — of window scenes. Any even so it does not say that such CGI kicked off at such high quality graphics that they were enough to fool a casual observer into thinking it was reality.

Since that chapter is the only thing that the original claim in "Computer Graphics and Computer Animation: A Retrospective Overview" references, there is no support for the claim that Apollo era simulators had high quality CGI.

And in any case it is self-evident that computer rendering at the time of the Moon landings was not even close to producing the kind of moving images that were shown to the public. It was not until 1988 — 20 years after the first human-crewed Apollo flights — with Pixar's short "Tin Toy" that we got a computer rendered animation of a human.

Is this paragraph truthful?

Yes, but not in the way you think. No CGI was done, merely digital control of still imagery.

The visual images for the Apollo trainers [...] moved to an entirely digital control.

Hijacking MichaelK's link to the NASA site, we find this (emphasis mine):

Requirements for realism increase the complexity of the simulation. For example, when an astronaut fires thrusters, the simulator must activate readouts and lights showing the thrusters firing, fuel reducing, velocity changes, and also show movement in the scene outside the cabin window. In a moving base simulator, such as a simulator in which a spacecraft cabin is suspended on hydraulically moved pylons to enable it to tilt, physical motion must take place. Causing all these things to happen and coordinating them to happen simultaneously is the difficult task of the simulator designer.

Analog computers commonly supported simulation in the 1950s and early 1960s. Having the advantage of great speed, the electronic analog computer fit well into the then analog world of the aircraft cockpit and its displays. By 1961, though, it became obvious that the simulation of a complete orbital mission would be impossible using only analog techniques. The types and number of inputs and calculations stretched the capabilities of such machines so that when NASA defined requirements for Gemini simulators, digital computers dominated the design.

This is made explicit a bit further down the page (emphasis mine):

Scene depiction in the Gemini era still depended on the use of television cameras and fake "spacescapes", as in aircraft simulators. Models or large photographs of the earth from space provided scenes that were picked up by a television camera on a moving mount. Signals from the computers moved the camera, thus changing the scene visible from the spacecraft "windows," actually CRTs.

The idea that these machines would create photo-realistic imagery on-the-fly is ludicrous if you look at what they were working with at the time:

The sets of computers could communicate among themselves by using 8K words of common memory, where information needed throughout the simulation could be stored. [...] Over 350,000 words of programs and data eventually ran in the two simulators.

They later ran into problems when the DDP-224's had trouble simulating the Apollo Guidance Computer... that's not the kind of hardware that could run CGI of any description.

Are there examples of the quality of this CGI?

No CGI was done. What the computers did was moving a camera pointing at pre-processed still imagery.

Digital image generation did not happen until the Space Shuttle. Same source, emphasis mine:

Actually, the Apollo Mission Simulators were the last of their type in that the analog environment of the spacecraft that dictated hybrid and functional simulations changed to a digital environment that lent itself to full digital simulations for the Shuttle program. Evolution to full digital simulation, including digital imaging of window scenes, meant even more dependence on digital computers. Making the Shuttle a more autonomous and thus more complex spacecraft contributed to a massive increase in the size of the computer systems needed to support simulations.

25
Did a NASA study show that arsenic-based bacteria are possible?
11
Are there 263 Sri Lankans working for NASA?
13
Does NASA use whale oil in the Hubble Telescope?
10
Has NASA discovered a possible “warp-like” drive using the EmDrive?
26
Did NASA receive a tax refund on a diamond window when it left the Earth aboard a space probe?
19
Did NASA refuse to pay a $400 fine for littering caused by the deorbiting of Skylab?
3
Did Apollo Moon landing program cost less than lipstick used by American women during same 11 years?