Is “Earth Overshoot Day” a useful or reliable metric of humanity's effect on the world?

Apparently, we are rapidly approaching Earth overshoot day and that day gets earlier every year. The Guardian explains:

Humanity is devouring our planet’s resources in increasingly destructive volumes, according to a new study that reveals we have consumed a year’s worth of carbon, food, water, fibre, land and timber in a record 212 days.

As a result, the Earth Overshoot Day – which marks the point at which consumption exceeds the capacity of nature to regenerate – has moved forward two days to 1 August, the earliest date ever recorded.

The foundation that developed the concept has a website that shows precise calculations of when the day has occurred for the last 50 years or so. this suggests a robust, credible and precise method (there is no hint of an error bar in any material on the sit) for generating the figures.

But some experts have doubts. This Nature Blog summarised one such objection:

How sustainably are we using Earth’s natural resources?

First: Can we even answer the question?

Not according to a new article in the journal PLoS Biology coauthored by Nature Conservancy Chief Scientist Peter Kareiva.

Kareiva and his coauthors argue that the most widely cited measure of global and national sustainability — the Ecological Footprint — has serious conceptual and scientific flaws that render it almost unusable for scientists, policymakers, resource managers and investors.

The idea gets significant media coverage every year when a very precise day is given the title. But it clearly has critics and its precision makes me extraordinarily skeptical.

Is the idea behind Earth Overshoot Day based on solid science or is it just a publicity stunt? If it is solid, how can it be calculated so precisely: what are the error bars on the calculation?

Yes, the 'ecological footprint' can be useful in suggesting areas where humanity has unsustainable practices which need to be improved.

The info and references in this answer come from this paper that examined ecological footprint methodologies. It comes from PLOS, a decent, peer-reviewed journal, so it and the articles it cites seem trustworthy enough.

The intro of the PLOS article details that the methodologies behind the footprint calculation are sound enough to be widely used, but that it is not presented in a useful way:

First popularized in the mid-1990s by Wackernagel and Rees 3, the EF has influenced the policies and communications of many governmental and non-governmental organizations. For example, EF metrics feature in the World Wildlife Fund's Living Planet Report, Worldwatch Institute's State of the World, the Global Environment Outlook of the United Nations Environment Program, the United Nations Development Program's Human Development Report, and the International Union for Conservation of Nature (IUCN)'s Transition to Sustainability; the Convention on Biological Diversity chose the EF as a key biodiversity indicator 4–[9].

Any global metric that attempts to capture and summarize a range of large-scale and complex phenomena is sure to entail simplifications, biases, errors, and gaps. Such limitations are unavoidable and must be traded off against the benefits, such as their utility for prioritization, target setting, and communication. This Perspective intends to demonstrate, however, that EF measurements, as currently constructed and presented, are so misleading as to preclude their use in any serious science or policy context.

Apparently, much of the popular metrics and methodology behind determining the ecological footprint, such as this paywalled article, come from the Global Footprint Network, who also seem to be the group behind Earth Overshoot Day.

Below is an example figure demonstrating Global Footprint Network metrics behind claims like 'humans use 1.5 Earths': 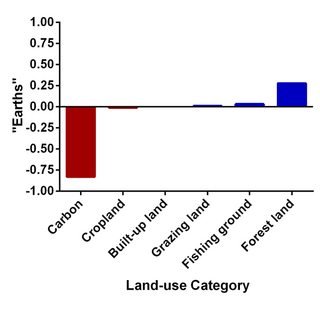 However, even the above metrics are built on some faulty premises. As the PLOS article explains:

When the global EF is decomposed into its six components (Figure 1), none of the five non-carbon land-use categories has any substantial ecological deficit—suggesting that depletion of cropland, grazing land, forest land, fishing grounds, and built-up land is not occurring on an aggregate, global level.

These figures appear to indicate a sustainable pattern of consumption, with productivity rising to meet growing demand [18],[21]. Another interpretation is that, beyond fossil-carbon waste, the EF is a poor representation of how well we are managing the planet, because a wide range of studies indicate that harm to Earth's ecosystem services is already significant, including declining soil fertility, increasing water scarcity, lowering of groundwater tables, oft-depleted fisheries, and loss of evolutionary history through species and population extinctions [22]–[26].

Essentially, Earth Overshoot Day completely oversimplifies sustainability: when it says we've consumed "a year’s worth of carbon, food, water, fibre, land and timber in a record 212 days.", we've actually consumed a years worth of carbon in less time, and have a surplus of everything else.

However, even if we break the footprint down each piece is still very misleading. Does forest growth in Maine cancel out the effect of deforestation in the Amazon? Does growth of salmon populations cancel out the depletion of cod? Does growth of arable land in Siberia cancel out desertification in Africa? The answer to all these questions is an obvious 'no', but do not appear to be covered in metrics used to determine humanity's ecological footprint.

In short, these metrics can be used to suggest areas that need improvement or more research into sustainable practices, but do little to truly identify or fix the actual problems. Planting some trees in your verdant local park or consuming less beef from cows grazing the stable plains of Texas are nice gestures, but are essentially worthless when it comes to global sustainability.

Not the answer you're looking for? Browse other questions tagged economics environment earth ecology .