Is lactose intolerance an outdated diagnosis for discomfort after milk ingestion?

As a continuation of a question of most adults being lactose intolerant, the marketing of The a2 Milk Company in Australia House at SxSW 2018 suggested it may not be lactose-intolerance, after all, but instead the sensitivity to the A1 protein found in cow's milk prevalent within certain countries that's causing the milk-drinking discomfort issues.

Looking for milk for Lactose Intolerance? Did you know that some people who experience lactose intolerance symptoms might actually be sensitive to A1 protein?

Many people, even trained healthcare professionals, assume if they have discomfort after drinking milk that they’re lactose intolerant without being tested to make sure. But research suggests that only about 5-7% of these cases can be attributed to Lactose Intolerance!

Is this really true?! Only 5-7% of lactose intolerance diagnoses are correct?! This would appear to be a very disruptive phenomenon on misclassification of the vast majority of the population, yet Wikipedia articles on Lactose intolerance and A2 milk, for example, make no mention of any of this, and instead the latter article goes into lengths of how The a2 Milk Company has unsuccessfully tried to lobby various governments for warning labels for non-A2-milk around unrelated and unproven long-term health effects of A1 vs. A2 milk.

Moreover, as a followup question, if it's really true that we're all not lactose-intolerant, after all, then where's the rationale for the lactase enzyme supplements and LACTAID® milk seemingly addressing the associated discomfort issues of the generic milk?!

The estimation of prevalence of lactose intolerance may be too high because of:

So, lactose intolerance may be wrongly diagnosed in 20% of cases, but not likely in "most" cases and even those 20% are from a variety of problems, not just from sensitivity to A1 milk protein.

The geographical distribution of lactose intolerance and A2 (A1-free) milk 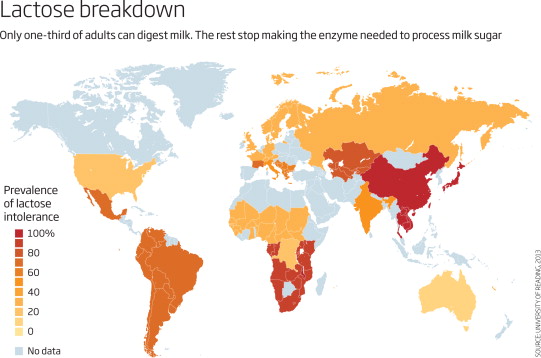 The distribution of A1 and A2 milk are from Today's Dietitian, 2017:

According to the California Dairy Research Foundation, the typical dairy cow in the United States produces approximately equal amounts of A1 and A2 forms of beta-casein in its milk. Dairy herds in much of Asia and Africa and parts of Southern Europe are naturally more likely to produce only A2 proteins.

So, in the areas with cows with A1-free (A2-only) milk (Asia, Africa, South Europe), the estimated prevalence of lactose intolerance is high, which does NOT support the hypothesis that it is sensitivity to A1 milk that causes gastrointestinal problems in most individuals diagnosed with lactose intolerance.

A1 vs A2 milk and gastrointestinal symptoms

In few studies reviwed here Systematic Review of the Gastrointestinal Effects of A1 Compared with A2 β-Casein (Advences in Nutrition, 2017), consumption of A1 milk was associated with gastrointestinal symptoms in some individuals, but the prevalence of the problem is not known:

In humans, there is evidence from a limited number of studies that A1 consumption is also associated with delayed intestinal transit (1 clinical study) and looser stool consistency (2 clinical studies). In addition, digestive discomfort is correlated with inflammatory markers in humans for A1 but not A2. Further research is required in humans to investigate the digestive function effects of A1 relative to A2 in different populations and dietary settings.

In people with lactose intolerance, lactose is not fully digested due to lack of the enzyme lactase in the small intestinal lining. The undigested lactose is ultimately fermented by normal large intestinal bacteria, which produce gas and thus cause bloating and flatulence.

The diagnosis of lactose intolerance is made by a hydrogen breath test in which you drink 25-50 grams of lactose in water solution (to compare: ~50 g lactose is in 1 liter of milk) and if you can't digest lactose, it will be fermented by intestinal bacteria, which will produce hydrogen, which will be absorbed into the blood and appear in your breath (intestinal bacteria are the only source of hydrogen that appears in breath). However, the test does not confirm the actual lack of the enzyme lactase, so it can be positive in other conditions with malabsorption and increased intestinal motility, in which lactose travels fast through the intestine and does not have time to be digested, for example, due to psychological expectation of intolerance, irritable bowel syndrome, small intestinal bacterial overgrowth, fructose malabsorption, celiac disease, Crohn's disease, etc (American Family Physician, 2002, Monash University, 2018). This means, it's likely that lactose intolerance is overdiagnosed, but we can't say by how much.

So, the old vs new 2009 estimation of lactose intolerance prevalence in Americans is:

High estimates of lactose intolerance prevalence my be due to:

Not the answer you're looking for? Browse other questions tagged nutrition biology milk nutritional-supplements cows .

16
Are most adults lactose intolerant?
6
Does milk from Holstein cows cause diabetes?