There is a picture attributed to Simpsons episode from early 2000's (I couldn't deny or confirm it yet after some search) which has been circulating on the Social media a lot: 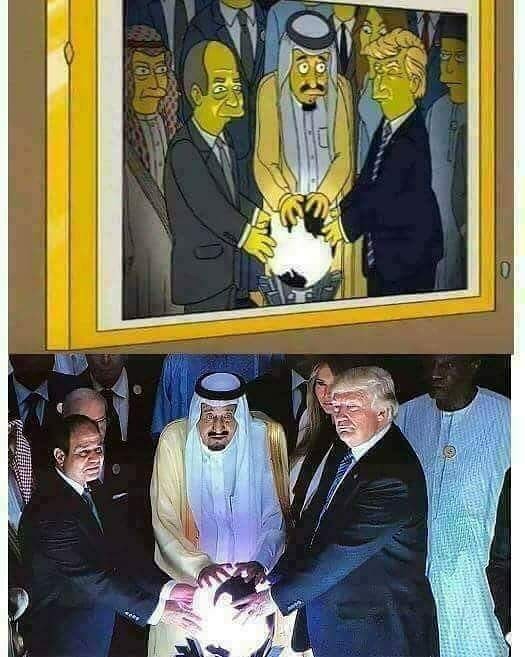 Ridiculously, this pic is almost a carbon copy of the one at summit (in Saudi Arabia if I am not wrong?). So can someone confirm whether it was really aired in an episode of Simpons then or its fabricated one?

The Simpsons creators are eerily good at predicting the future, and in this case both the picture and screen grab of the cartoon are accurate, however mis-attributed. It is not from a 2002 episode, it is from a 2017 video posted to the Simpsons facebook page after Trump's visit to Saudi Arabia.

The photograph, as we know, is of President Trump, Saudi King Salman bin Abdulaziz, and Egyptian President Abdel Fatah al-Sisi at the Global Center for Combating Extremist Ideology in Riyadh, Saudi Arabia in May 2017

Not the answer you're looking for? Browse other questions tagged divination .

6
Did the Qur'an predict the defeat of the Persians at the Battle of Issus?
8
Did the Zohar predict 9/11?
67
Did this Twitter bot predict the Paris shootings 2 days before they happened?