Did Obama defy precedent by not visiting the D-Day monument? 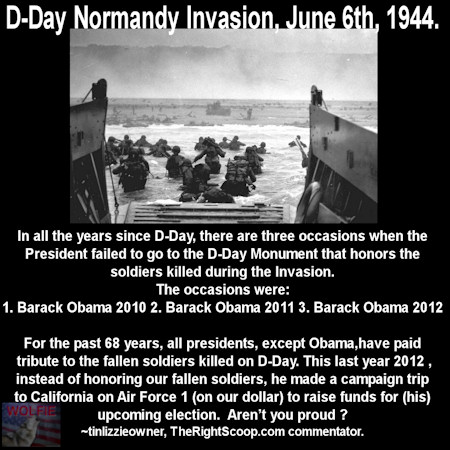 This seems like a very dubious picture, from a very clearly politically motivated website, but I was wondering if there was any truth to this picture?

Between 1944 and 2016 — a span of 72 years — four U.S. presidents have attended D-Day memorial ceremonies a total of seven times, and Barack Obama attended two of the seven.

The reason Snopes talks about "presidential activity [...] on the anniversary of D-Day" instead of going to "the D-Day Monument" is that there is not the D-Day monument.

As Snopes points out, there is the National D-Day Memorial, but no president has visited on D-Day since its opening in 2001, when Bush dedicated it on D-Day. There is the National World War II Memorial, but that has never seen a presidential visit on D-Day. And there are D-Day ceremonies in Normandy, but those have not been visited regularly by presidents (see also Politifact).

The daily schedules of past US presidents are, in many cases, publicly available. So just for completeness, let's try to collect a list of what the sitting President was doing on June 6 of every year. I think it'll be illustrative.

This is community wiki, so feel free to contribute. Please include links. Any D-Day-related activities should go in bold.

Not the answer you're looking for? Browse other questions tagged politics world-war-ii barack-obama .

50
Is Snopes a "hoax" that is "covering up" for the Obama administration?
12
Did Bill Ayers ghost-write for Obama?
20
Did Obama have a marine demoted for correcting him?
18
Is Obama the first President of the US to write a computer program?
14
Did Obama remove a Winston Churchill bust from the oval office?
21
Was UK national debt higher in 2016 than 2010?
27
Did the FBI plant an informant in the Trump campaign during the Obama administration?
28
Is the skeptical movement an offshoot of the Communist Party?
3
Did 20th-century Marxists acknowledge that the central social predictions of Marxism were wrong?