Is there a surge in youth erectile dysfunction?

You couldn’t make it up, right? Wrong: erectile dysfunction in men in their teens and 20s — coupled with an inability to maintain erection or achieve climax — is now “massive”, according to a leading sexual psychotherapist.

“The number of young men with performance issues has escalated in the last five years,” says Angela Gregory, who has treated men with erectile dysfunction for 16 years at Britain’s Nottingham University Hospital.

“Historically this was men in their 40s and 50s with underlying health issues: cardiovascular disease, diabetes, ME (myalgic encephalomyelitis) or prostate issues. Now I see as many men in their 20s — the split is equal. This is a massive thing.”

A similar story has appeared in the Express:

Exposure to images and films is de-sensitising men in their late teens and early 20s, leaving them unable to get aroused in the bedroom, experts have revealed.

Erectile dysfunction (ED), also known as impotence, is the inability to get and maintain an erection. It is a common condition in older men but uncommon in younger men.

However, Angela Gregory, a psychosexual therapist, said she has seen a surge in young men attending her clinic at Nottingham University Hospital.

What I've seen over the last 16 years, particularly the last five years, is an increase in the amount of younger men being referred," she said.

"Our experience is that historically men that were referred to our clinic with problems with erectile dysfunction were older men whose issues were related to diabetes, MS, cardio vascular disease.

"These younger men do not have organic disease, they've already been tested by their GP and everything is fine.

"So one of the first assessment questions I'd always ask now is about pornography and masturbatory habit because that can be the cause of their issues about maintaining an erection with a partner."

A third story not relying on the same UK data came from an Italian clinic: 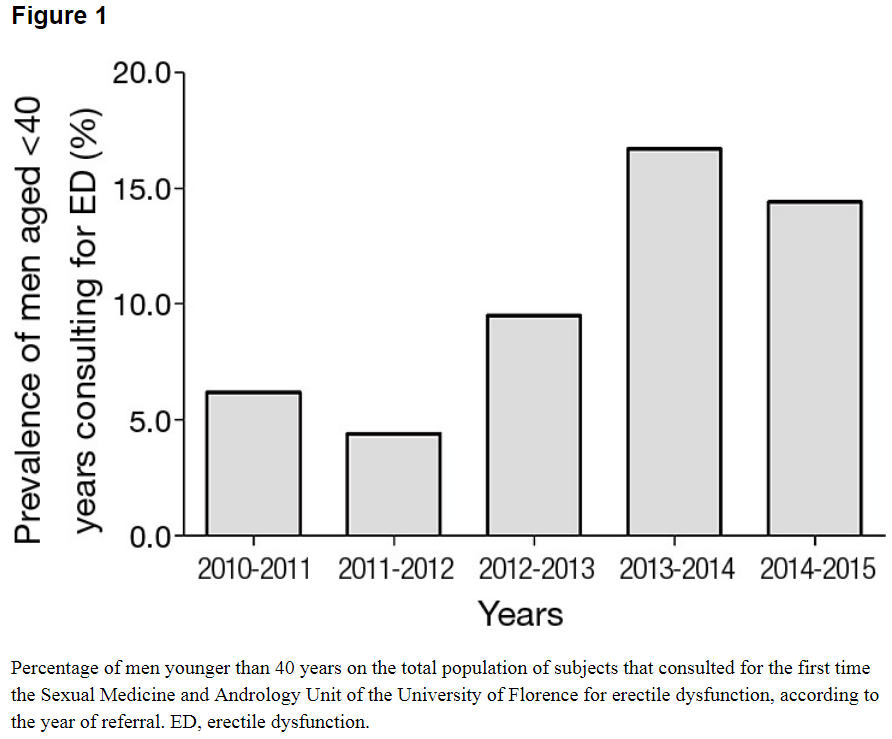 In our Sexual Medicine and Andrology Unit, established in an Endocrinology setting at the University of Florence, medical consultations for younger men are infrequent, with a prevalence of men aged less than 40 years at only 14.1% of more than 3,000 men complaining of ED. However, when considering the new referrals to our Unit during the last 6 years, we can notice a progressive increase in prevalence of men below 40 years seeking medical care for ED (Figure 1). According to these data, ED is becoming a common concern even among young men, and the clinical practitioner in sexual medicine must become aware of how to manage the problem and avoid underestimating a symptom.

So this does raise the question whether it is a Europe-wide phenomenon, restricted to some countries, etc. I'm also going to say that going just by who shows up the clinics (instead of representative samples) risks a form of Berkson's paradox.

There might well be a rise in documented cases of ED:

In contrast to what has been reported by population studies of the prevalence of ED in young patients, our findings show that one out of four men seeking medical help for ED in the daily clinical practice of an outpatient clinic is a young man below the age of 40 years. Moreover, almost half of the young men suffered from severe ED, being this proportion comparable with that observed in older individuals. Moving to the daily clinical practice, current findings prompt us to further outline the importance of taking a compre- hensive medical and sexual history and performing a thorough physical examination in all men with ED, irrespective of their age. Likewise, given the low rate of seeking medical help for disorders related to sexual health, these results express even more the need that healthcare providers may proactively ask about potential sexual complaints, once more even in men younger than 40 years of age.
Paolo Capogrosso et al.: "One Patient Out of Four with Newly Diagnosed Erectile Dysfunction Is a Young Man—Worrisome Picture from the Everyday Clinical Practice", International Society for Sexual Medicine (J Sex Med) 2013;10:1833–1841. DOI: 10.1111/jsm.12179

Among the reasons listed as possible causes is not pornography but that ED might be seen as a sentinel symptom for cardio-vascular health, arteriosclerosis, obesity, diabetes etc. That is to be read as: the patients "failed" to meet the criteria for physical diagnosis, so far. But experience suggests that one of these subclinical symptoms of disease will manifest later as an ordinary organic cause for the early onset problems now. That means: a very hard to measure or even estimate portion of those young sufferers are clinically/organically fine, but will not stay in that range of health.

Having a medical community trained on diagnosing a syndrome will lead to higher diagnosis numbers. Going to a doctor and complaining makes a diagnosis much more likely than staying at home. Comparing a

Over the past few years there has been an explosion of online hard core pornography that is influencing and educating people about what is “normal” and creating a cultural context to which they aspire and judge themselves against. This presents serious challenges for healthcare professionals and therapists alike. (Gregory, sb.)

Case study: The use of psychosexual therapy for a man presenting with psychogenic erectile dysfunction (Box 16.1) Assessment identified: Predisposing factors: Lost his erection when he first attempted sexual intercourse aged 16 years. His partner told everyone about it via Facebook; he felt humiliated and ashamed and as a result he stopped socializing and avoided sexual relationships.
Angela Gregory: "Psychosexual therapy for male sexual dysfunction", Ch 16, p 133–142; in: Suks Minhas & John Mulhall (Eds): "Male Sexual Dysfunction A Clinical Guide", Wiley: Chichester, 2017. (Yes, the same specialist from the article in the question.)

This review article was the most authoritative one I could find. As is typical with medical subjects, it turns out to be complicated. There is evidence that more young men are reporting erectile dysfunction (ED), and pornography seems to be a part of the situation. The paper presented three case studies and references a fourth. In three the problem went away when the patients stopped using pornography, and in the third the patient was unable to stop using pornography. The paper comments that proper intervention studies are needed to find out if this is a real effect.

The biggest problem with the evidence is that the increase in availability of pornography has probably led to a large increase in men watching it, so merely observing that men presenting with psychological ED also watch a lot of pornography doesn't tell you very much; they probably also eat quite a few hot dinners, but nobody is claiming that hot dinners cause ED. At the same time the increase in reported ED may be due to an increased awareness that it exists and that help is available. That this occurred at the same time as an increase in pornography is not surprising as both are mediated by the Internet.

Not the answer you're looking for? Browse other questions tagged medical-science psychology sexuality .

30
Do non-FDA approved "male enhancement" pills work?
14
Does the fasting two times a week diet (the 5:2 diet) provide health benefits?
21
Could smoking cause erectile dysfunction?
3
Can taking Cialis cure Erectile Dysfunction permanently?
9
Is the difference between men and women' estimates of their number of sexual partners caused because men estimate rather than count?
18
Do comprehensive Sex Ed programs reduce teenage sexual activity?
13
Are young liberal women more likely to have a mental health condition?

// TODO sg: TMP solution until we are confident in our current implementation of async imports // once we are, we can move the if into the js entry file and dynamically load the mark obsolete module