This may seem like an idiotic question, but Indonesians officials say that condensed milk does not contain milk.

With no milk at all, sweetened condensed milk has managed to cheat those people who often serve it to children, as an alternative to the more expensive milk powder.

It's hard to get an English source for this claim. However, this news is going viral in Indonesia.

Sweetened condensed milk is made by evaporating some of the water from milk and adding sugar. So yes it does contain milk as your wikipedia link in your original question stated.

The article that you link to though appears to be a bad translation of what officials are saying. According to The Jakarta Post condensed milk or sweetened condensed milk may no longer be marketed like it is the same as ordinary milk.

Sweetened condensed milk contains additional sugar making it a poor substitute for ordinary milk. Unfortunately, the producers of SCM (or SKM in Indonesia) have long sold it as a healthy alternative to ordinary milk. This includes recommending two glasses a day mixed with water, having images of fresh milk on the label, and having images of young children drinking it on the label. Under new advertising guidelines these would be forbidden.

Notwithstanding the @Legion600 's answer to the implicit question, I just wanted to be clear:

At the very least, Nestle Carnation Milk contains milk, sugar and nothing else. According to their product website:

Sweet and deliciously creamy, Carnation® Condensed Milk is made from all natural ingredients.

It usually does. There can be no definitive answer because as noted in the 14th edition of A Complete Course in Canning and Related Processes there's no international standard for condensed milk. So it depends on the national/regional standards how much milk must there be in it. But the book does give some usual industry figures:

So, yeah, according to the usual manufacturing process, most of the mass of condensed milk... originates from milk. A less scientific article which reiterates the same, but also explain the difference with "evaporated milk":

Both evaporated and condensed milk begin as fresh milk. The milk undergoes a vacuum process that evaporates over half the volume of water and concentrates the nutritive part of the milk. Evaporated milk is then poured into cans that are heatsterilized to prevent spoilage. The ultrahigh temperatures of sterilization cause the milk sugars to caramelize and give evaporated milk its characteristic cooked taste. In the end, evaporated milk has the consistency of light cream and a tint that ranges from ivory to pale amber.

Condensed milk is basically evaporated milk with a lot of sugar added (up to 2-1/3-cups per 14-oz. can) before it’s canned. The result is a thick, gooey, and intensely sweet product. Since large amounts of sugar prevent bacterial growth, condensed milk doesn’t need to be heat-sterilized and has a less caramelized flavor than evaporated milk.

Despite their similar packaging and nomenclature, evaporated and condensed milk are not interchangeable. Evaporated milk can be reconstituted with an equal volume of water and used to replace fresh milk in most recipes.

Due to its high sugar content, the primary use for condensed milk is in sweets.

And the Encyclopedia of Food Sciences and Nutrition has a bit of background story as to when the naming difference originated:

The basic process for preservation of unsweetened condensed milk by heat sterilization was conceived by John B. Meyenberg in 1882, a Swiss citizen, and an employee of the Anglo-Swiss Condensed Milk Company. The idea of preserving milk without the addition of sugar was made possible by his invention of a revolving sterilizer working with steam under pressure. Lacking sufficient support from his company to continue his work, he migrated, in 1884, to the USA and also obtained a patent for his invention in that country. In 1885, Mr Meyenberg was cofounder of the Helvetia Milk Condensing Company in the State of Illinois, and during the same year, he achieved the first successful manufacture of unsweetened condensed milk. The name of this product was changed to evaporated milk for a clearer distinction from sweetened condensed milk, a situation that prevails today.

It's not clear to me what terms were used in Indonesian (for one vs the other variety), but presumably the latest regulatory effort is to create a similar distinction. In any case, the clear intent of the regulator is to stop sugar-added condensed milk being sold as milk. Another reporting on the same from JakartaGlobe:

According to Damayanti Rusli Sjarif, the head of nutrition and metabolic diseases at children's health department of the University of Indonesia, condensed milk is used all over the world for producing pastries, cakes, ice cream, not as a milk substitute.

"In Indonesia, however, sweetened condensed milk is given to children and infants as an alternative to formula milk," Damayanti said.

Recent studies by Unicef, Asean and WHO concluded that one in eight Indonesian children is overweight, with a major contributing factor being the consumption of dense processed foods, including condensed milk.

More than 50 percent of sweetened condensed milk is just sugar, and 100 grams of it account for 18 percent of the recommended daily intake of carbohydrates.

Oddly, none of the 3 Indonesian news stories (in this Skeptics page) mention evaporated milk, so I'm guessing the latter might have very poor market penetration in Indonesia.

Australia and New Zeeland have a common standard for what constitutes condensed and what evaporated milk:

(1) A food that is sold as condensed milk must:

(a) be condensed milk; and

(2) A food that is sold as condensed whole milk and derived from cow’s milk must contain:

(3) A food that is sold as condensed skim milk and derived from cow’s milk must contain:

(1) A food that is sold as evaporated milk:

(a) be evaporated milk; and

(2) A food that is sold as evaporated whole milk and derived from cow’s milk must contain:

(3) A food that is sold as evaporated skim milk and derived from cow’s milk must contain:

So yeah, they impose (lower) limits on milk solids/proteins and (upper limits) on milk fat (for some varieties), but I guess they just rely on the customary market distinction for not getting sugar into evaporated milk, because there's no specific sugar limit in that standard that I can see. So I'm guessing Indonesia has had a somewhat unique problem with the condensed milk (marketing), at least regionally.

Also, to some extent, the viral story in Indonesia reminds me of the plastic sold as rice stories, which turned out to be bogus.

It's hard to answer for every product sold all over the world, but here's the ingredient list printed on a can of Eagle Brand sweetened condensed milk: 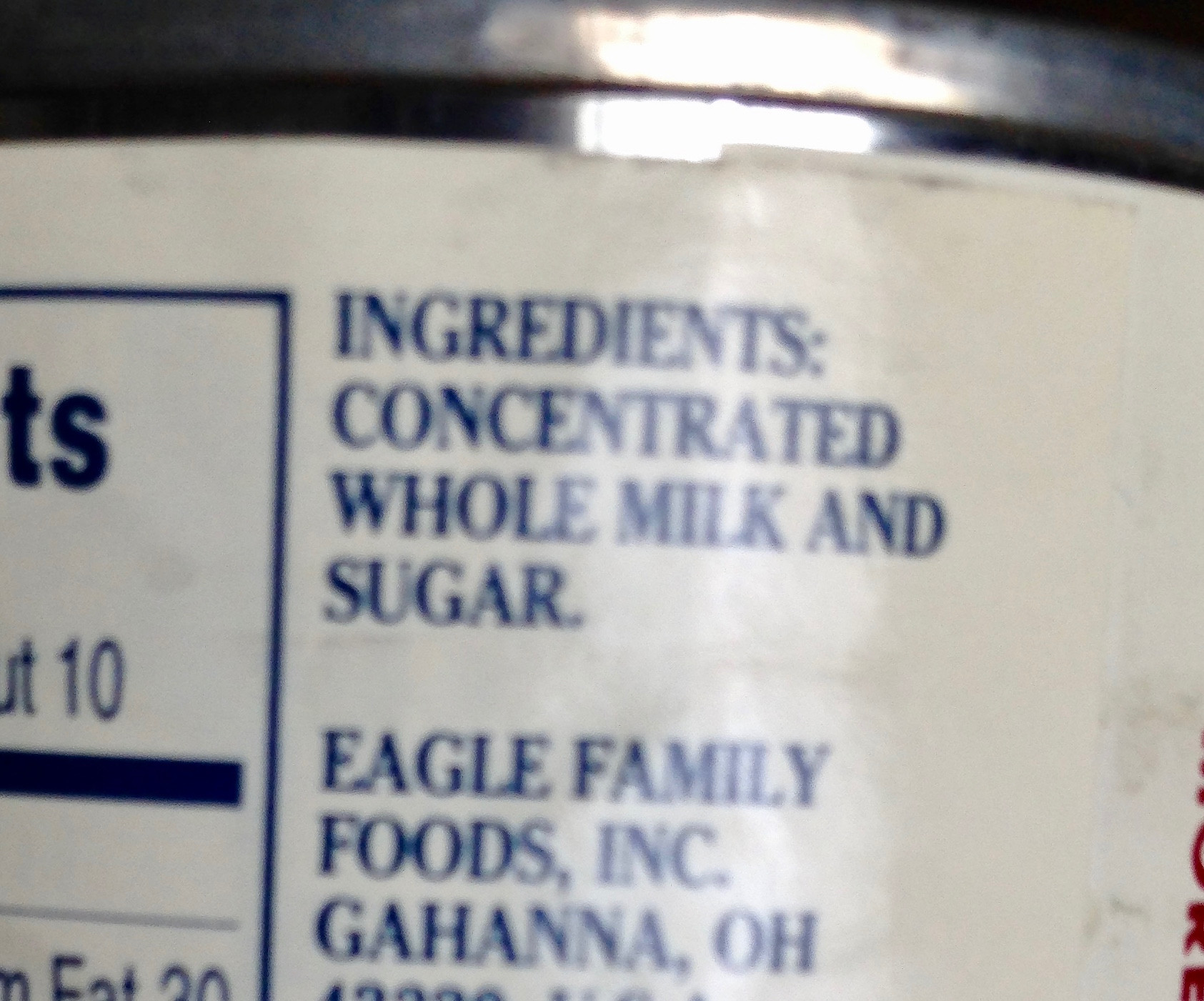 So, sweetened condensed milk in the US contains 1) concentrated whole milk, and 2) sugar.

Condensed or evaporated milk is made by heating raw milk under reduced pressure (a partial vacuum), so that it boils between 110 and 140°F/43-60°C, until it has lost about half its water. The resulting creamy, mild-flavored liquid is homogenized, then canned and sterilized. The cooking and concentration of lactose and protein cause some browning, and this gives evaporated milk its characteristic tan color and note of caramel...

He goes on to explain that sweetened condensed milk has sugar added, and that this reduces the available water to the point where bacteria cannot survive and the product doesn't even need to be sterlized.

That doesn't mean that some nefarious business hasn't been selling phony condensed milk in some market somewhere, but I think it does provide some evidence that condensed milk, whether sweetened or not, is expected to be made from milk.

Also, as Legion600's answer explains, the fact that sweetened condensed milk contains milk doesn't make it a healthy alternative to milk for children.