A piece of research from a pair of well-known economists, Lawrence Katz and Alan Krueger as summarized in Quartz a couple of years ago:

“We find that 94% of net job growth in the past decade was in the alternative work category,” said Krueger. “And over 60% was due to the [the rise] of independent contractors, freelancers and contract company workers.” In other words, nearly all of the 10 million jobs created between 2005 and 2015 were not traditional nine-to-five employment.

Has this analysis stood the test of time since then?

(Barely registering as an answer.) The claim on US broader (given its time frame) and deeper (given the lower level of unemployment there), but I find it a bit more believable after I read in a 2017 FT article that Europe has seen a similar phenomenon since 2013.

A new report from Bank of America Merrill Lynch titled “Job Quality and Escape Velocity” shows much of the impressive falls in eurozone unemployment over last three years has been underpinned by jobs of “deteriorating quality”.

“The improvement in the quantity of jobs has been offset by a significant deterioration in their quality”, says Gilles Moec, European economist at BAML.

“The near-entirety of the rebound in the headline employment rate since 2013 can be ascribed to ‘lower quality’ jobs”, adds Mr Moec.

The actual report is doesn't seem to be online.

Anyway, it looks like the head of the ECB is conceding this fact.

Asked if Europe will fully recover from its recession, Mr Draghi said: “Europe has recovered from the recession.

"Now it has been around four and a half years the economy has been expanding and employment is higher tan ever.

"Seven million jobs have been created over the past three and a half years.”

He added “these numbers conceal different realities, namely and more specifically the quality of these jobs, which need to be improved.”

A large amount of these jobs are either temporary or part time jobs. By far the highest proportion of part-time workers in 2016 was found in the Netherlands at 46.6 percent, followed by Austria, Germany, Belgium, the United Kingdom, Sweden, Denmark and Ireland, where part-time work accounted in each case for more than a fifth of those in employment.

Part-time work has increased distinctly between 1993 and 2016 in Germany, Ireland, Italy and Austria In 2015 the amount of part-time workers were 19 percent in the EU area, it fell to 18.9 percent in 2016. However, it has now become a concern again.

The BAML report constructed a "core employment rate" excluding all the temp and part-time jobs. And with this measure, Europe doesn't look all that recovered: 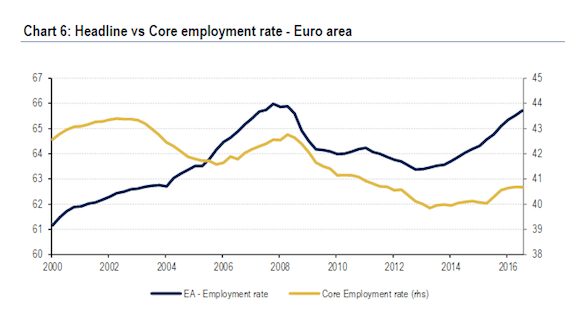 And a somewhat similar 2015 story from Canada:

The quality of jobs in Canada has dipped to its lowest level in a quarter century, revealing a structural issue that could prove difficult to reverse, says a new study by CIBC.

The big bank said Thursday its employment quality index, which slipped 1.8% last year, was down 15% since the early 1990s.

The index examines the distribution of full- and part-time positions, the gap between self-employment and the higher-quality jobs for paid employees, and whether full-time jobs were created in low-, medium- or high-paying sectors.

However, the damage to full-time work during each recession was largely permanent, the study added.

By sector, the bank said the number of low-paying positions had increased faster than higher-paid jobs since the early 1990s.

Not the answer you're looking for? Browse other questions tagged united-states economics employment .

5
Were the vast majority of lost manufacturing jobs since 2000 lost due to automation?

29
Are there between 100,000-300,000 child sex slaves in the United States today?
17
Were more than a half of all Silicon Valley tech companies founded by immigrants between 1995 and 2005?
16
Does immigration to the USA increase the unemployment rate?
8
Does it take the average US worker in 2015 just 17 weeks of work a year to earn the average living standard of 1915?