Were the vast majority of lost manufacturing jobs since 2000 lost due to automation?

There has been a lot of discussion here in the US about manufacturing and about bringing back jobs from overseas.

While interviewing US presidential candidate Andrew Yang on the Waking Up podcast, Sam Harris quotes a study from Yang's book:

80% of lost manufacturing jobs since 2000 are due to automation.

Yang responds that the actual estimate might be disputed, but there is general agreement it accounts for the vast majority.

Is this statistic accurate? Have the vast majority of manufacturing jobs lost since 2000 been lost due to automation?

This article in Quartz has a number of references to the economic consensus you refer to. The most authoritative seems to be this one. However Susan Houseman has done a more detailed analysis, breaking up "manufacturing" into different sectors. She shows that this supposed growth in productivity is entirely due to the computer and electronics industry. If you exclude electronics then manufacturing productivity growth is pretty flat. The Quartz article I linked above has more details. You can also see her give a talk on the subject here or read her paper on it.

One has to be careful with this kind of analysis; if some things are up and some things are down then you can always make things look bad by declaring the best bits to be outliers, and vice versa. However in this case it does seem that the computer industry is indeed an outlier. Certainly the productivity growth is unevenly distributed between different industries, and if you are in one that isn't growing then you are basically stuffed.

(Edit: I should add, be careful to distinguish between "production", which is the total amount of stuff produced, and "productivity" which is the rate at which stuff is produced per person per day)

It largely depends who you ask, even in the field. One more recent paper by Acemoglu and Restrepo (2017) that tried to quantify the loss:

In this paper, we estimate the impact of industrial robots on employment and wages in the United States between 1990 and 2007 on US local labor markets. [they wanted to avoid the major recession]

Because there are relatively few robots in the US economy, the number of jobs lost due to robots has been limited so far (ranging between 360,000 and 670,000 jobs, equivalent to a 0.18- 0.34 percentage point decline in the employment to population ratio).

This is a much lower percentage of the total loss of mfg jobs (far below half). What is interesting about this paper is that it tried to simultaneously account for a number of phenomena including imports, offshoring etc. and by US zone (a lot of these data comes from other papers though, not primary sources, so there's a potential for compounding of errors). Here's some eye candy from the paper 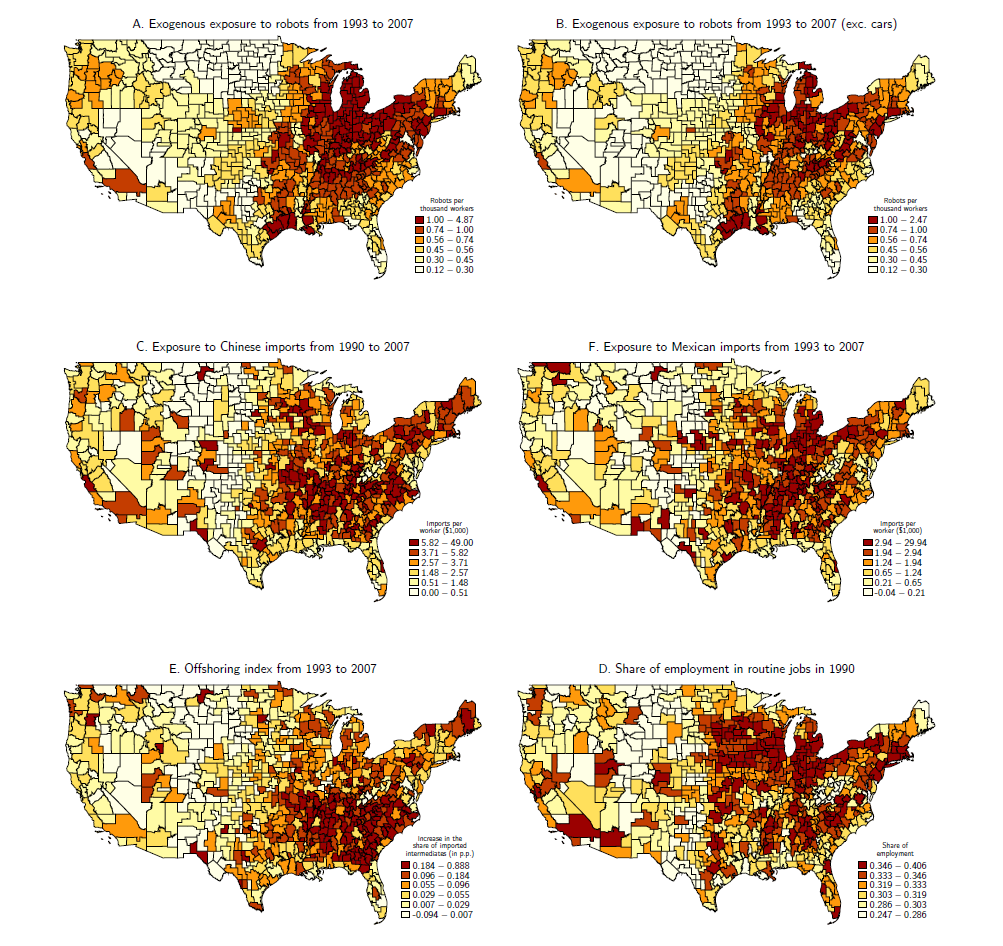 And on top of all that data, they used a model of trading zones to estimate the aggregate effect of robots.

There's also some comparative data from Andes and Murro (2015) from different countries suggesting that automation alone was a poor predictor of manufacturing job losses in most countries.

Yet the evidence suggests there is essentially no relationship between the change in manufacturing employment and robot use. Despite the installation of far more robots between 1993 and 2007, Germany lost just 19 percent of its manufacturing jobs between 1996 and 2012 compared to a 33 percent drop in the United States. (We introduce a three-year time lag to allow for robots to influence the labor market and continued with the most recent data, 2012). Korea, France, and Italy also lost fewer manufacturing jobs than the United States even as they introduced more industrial robots. On the other hand, countries like the United Kingdom and Australia invested less in robots but saw faster declines in their manufacturing sectors. 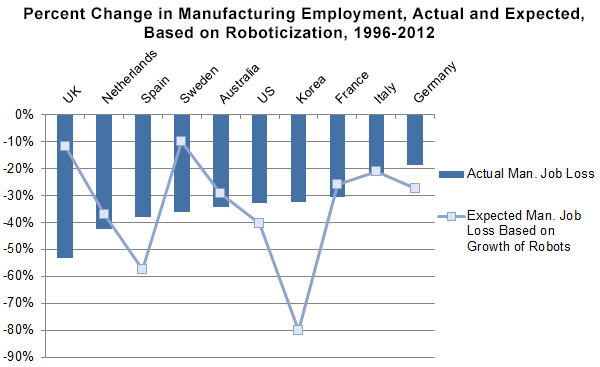 What all this suggests is that it's no easy task to estimate to what past job losses were due, never mind the huge variations in estimates for the future impact of automation.

18
Do small businesses create the majority of the jobs in America?
2
Does the Defense establishment have plants in vast majority of Congressional districts?
7
Deaths due to firearms in the US since Civil War
35
Has the FTSE lost more value in 12 months than the UK has paid into the EU during the 45 years since they joined?
10
Were 51,000 Pennsylvania jobs lost under the Obama administration?
14
Were the vast majority of people on the National Sex Offender Registry children when they committed their crime?