Will the 2019 EU Directive on Copyright in the Digital Single Market ban memes?

There have been lots of reports recently about how the EU are trying to ban memes. For example:

In the last few days the EU Commission's Twitter account responded to these claims with a meme: 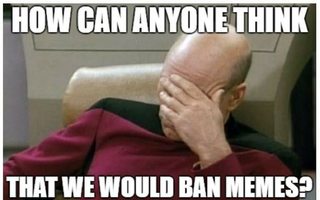 I don't believe that they are trying to ban memes as their post indicates but if this new directive was passed would it be an effective ban on memes and meme sharing?

Jim Killock, executive director of the UK's Open Rights Group, told the BBC: "Article 13 will create a 'Robo-copyright' regime, where machines zap anything they identify as breaking copyright rules, despite legal bans on laws that require 'general monitoring' of users to protect their privacy.

"Unfortunately, while machines can spot duplicate uploads of Beyonce songs, they can't spot parodies, understand memes that use copyright images, or make any kind of cultural judgement about what creative people are doing. We see this all too often on YouTube already.

So basically your Picard image could get zapped as a copyright violation, without human intervention. Or at least that's what the opponents of the proposal claim. I recall that something like that happened on YouTube with soundtracks, using a similarly automated technology, so the fear is perhaps not outlandish.

But as YouTube grew, so did its resources, and its need to keep business partners happy (and avoid lawsuits). Now YouTube lets anyone register their content with Content ID and hunt down infringers. The algorithm errs on the side of false positives: The site even took down computer-generated static because it sounded like an existing video of static. Rugnetta explores the chilling effect on fair use in “Automated Copywrongs,” an episode of his podcast Reasonably Sound.

The EU, in its wisdom, has made parodies expressly legal as of October 1, 2014.

"The only, and essential, characteristics of parody are, on the one hand, to evoke an existing work while being noticeably different from it and, on the other, to constitute an expression of humour or mockery," the EU rules state.

Although discriminatory parodies are not permitted:

"If a parody conveys a discriminatory message (for example, by replacing the original characters with people wearing veils and people of colour), the holders of the rights to the work parodied have, in principle, a legitimate interest in ensuring that their work is not associated with such a message."

So there's probably going to be some friction between the proposed new article 13 of robo-whatever and the existing EU legislation which does explicitly allow parodies. It remains to be seen how this conflict is going to be solved in EU directives.

Variety noted in article last year that YouTube has made it somewhat easier for such conflicts to be temporarily resolved in the favor of the disputed content:

YouTube has taken some steps to combat bogus copyright claims — but only for those flagged in its Content ID system. Last year [=2016] the video giant implemented a policy under which videos subject to disputed copyright claims are allowed to remain online and generate ad revenue while the disputes were being evaluated. However, that applies only to Content ID, not to individual copyright takedown notices submitted by third parties (as in the Bad Lip Reading situation).

Whatever you may think of YouTube's solution, scaling it to the level of the whole Internet seems much more problematic:

In a letter to the EU, they wrote: "As creators ourselves, we share the concern that there should be a fair distribution of revenues from the online use of copyright works, that benefits creators, publishers, and platforms alike. But Article 13 is not the right way to achieve this. By requiring internet platforms to perform automatic filtering all of the content that their users upload, Article 13 takes an unprecedented step towards the transformation of the internet from an open platform for sharing and innovation, into a tool for the automated surveillance and control of its users."

Not the answer you're looking for? Browse other questions tagged law europe .

3
Will the Affordable Care Act negatively impact radiologists in America?
59
Does Lebanon ban the diary of Anne Frank?
9
Did European Muslim protestors carry signs "Shariah for the Netherlands", "Islam Will Dominate the World, Freedom Can Go to Hell"