Did New York Times post this Hitler apology stating Jews baited the Nazis by trying to fight back on June 15, 1934? 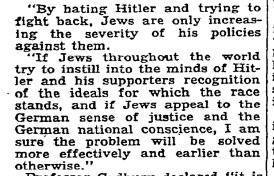 "By hating Hitler and trying to fight back, Jews are only increasing the severity of his policies against them.

"If Jews throughout the world try to instill into the minds of Hitler and his supporters recognition of the ideals for which the race stands, and if Jews appeal to the German sense of justice and the German national conscience, I am sure the problem will be solved more effectively and earlier than otherwise."

As the source of the image says, it’s from the June 15, 1934 issue of The New York Times. Here’s a screenshot of the article, "URGES GOOD WILL BY JEWS FOR NAZIS" by Henry J. Cadbury the Professor of Biblical Literature of Bryn Mawr College. Here is the article in full, with the quote from the question being under "Urges Appeal to Justice":

URGES GOOD WILL BY JEWS FOR NAZIS

Prof. Cadbury of Society of Friends Says It Will Gain More Than Will Hate

Dr. Goldenson Tells Session of Rabbis a Minority Must Not Use Tactics of Foes

Special to The New York Times

Wernersville, PA., June 14 — Good will, not hate or reprisals, will end, or offset, the evils of the Hitler government’s persecution of Jews, Professor Henry J. Cadbury, Professor of Biblical Literature at Bryn Mawr College, told the Central Conference of American Rabbis as it opened its convention here today.

The message as president of the conference was delivered tonight by the Rev. Dr. Samuel H. Goldenson, rabbi of Temple Emanu-El, New York.

Professor Cadbury is chairman of the service committee, American Society of Friends.

“Oppression of Jews in German by Hitler and his Nazi forces can be ended not by hate that their victims may display, or by attempts to fight back,” he said, “but by efforts to cultivate good will.”

“You can prove to your oppressors that their objectives and methods are not only wrong, but unavailing in the face of the world’s protests and universal disapproval of the injustices the Hitler program entails.

“By hating Hitler and trying to fight back, Jews are only increasing the severity of his policies against them.”

“If Jews throughout the world try to instill into the minds of Hitler and his supporters recognition of the ideals for which the race stands, and if Jews appeal to the German sense of Justice and German national conscience, I am sure the problem will be solved more effectively and earlier than otherwise.”

Professor Cadbury declared “it is the duty of Christians the world over to help right the injustices wrought by the Nazis.”

“Every God-believing Christian, in any nation,” he said, “should join in trying to atone for the wrongdoings done Jewish people, if only for the sake of their own Christian beliefs and Christian doctrines of universal goodwill and brotherhood.”

The boycott against German, he asserted, is not an effective means of meeting the evil.

“Boycotts are simply war without bloodshed,” he said, “and war in any form is not they way to right the wrongs being inflicted on the Jewish people.”

Hitler and what he symbolizes are spiritually contemporary with the Inquisition, although he uses modern means to “distill his poison,” Dr. Goldenson said in his message.

But he warned that the remedy against Hitlerism and the protection for minority groups lay not in a mere denunciation but “in the improvement of social conditions and relations wherever we live.”

As a foundation for this task he urged support for a program among Jews looking to “the revitalization of religious faith and reconsecration to ethical and spiritual ideals.”

Dr. Goldenson pointed out that “men like Hitler unfortunately are always present in the world, at any rate potentially,” adding:

“It is only when their fellows are greatly disturbed, defeated and frustrated that they become a prey to demagogues and false messiahs.”

He described the dangers inherent in the adoption by minorities of “the methods that seem to have made their enemies successful.”

“Should illiberalism develop in America,” he added, “it would most certainly show itself the denial of the humane and democratic principles upon which our government is founded an in the substitution of ideas not unlike those that are used to explain and to justify the German persecutions and atrocities.”

“Realizing then, as everyone must, that in the spread of intolerance we Jews are always the first victims, it behooves us to be especially watchful of our own conduct and not commit the folly of believing that similar illiberalism may not develop even among ourselves.”

“Everywhere there is a cry for Jewish solidarity. It is unquestionably important that especially in these threatening times we should think and act together. But solidarity will not serve us, as it does not serve the world at large, unless it is the result of critical thinking and of clearly conceived and completely justified objectives.”

“What is not quite so easy to understand is that Jewish likemindedness has always been derived from an adequate appreciation of the meaning of our history and the content of our literature. Unless we are informed upon our heritage, no Jewish standards can be developed, and when no such standards are developed, Jewish solidarity is certain to become nothing more than brute gregariousness in the hours when clouds gather and storms threaten.”

“We have already seen the signs of havoc wrought by uninformed and uncritical solidarity in our midst. In many cities our people have been called together by self-appointed leaders for the assertion of Jewish rights and for the promotion of special programs and objectives. the appeal has almost invariably been made in the name of Jewish solidarity.”

“Such an appeal, we should be reminded, is not unlike that of the superpatriots who frequently go so far as to insinuate that, if one does not heed their call, it is a certain sign of disloyalty to one’s people and to one’s country.”

Aid Program Should Be United

One of the tasks which should not be clouded by differences, Dr. Goldenson added, is helping German Jews to reach a haven wherever one is offered.

Jews, Dr. Goldenson said, “should wish to give the world more than successful careers.”

“Our bankers, commercial and industrial leaders, movie magnates, doctors, lawyers, scientists, and artists,” he said, “should in their respective fields so conduct their affairs as to body forth some added benefaction to their neighbors.”

Stressing the need for the development of spiritual values, he said he “would suggest that all our religious forces unite upon a program looking for the revival of Jewish interest and learning and for the stimulation of Jewish loyalties and idealism.”

“The Synagogue Council fo America, representing the three religious groups in our midst, may well make this program its primary business,” he proceeded.

“In recent years our people have become specialist in the art of conducting campaigns. We have managed many successful drives for relief, philanthropy and general social welfare. The time has come to use our expert knowledge as campaigners for the most vital need of our people and our day, the revitalization of religious faith and the reconsecration to ethical and spiritual ideals.”

“Why may not the week of Chanukah be used for such a campaign?”

In line with this program, Dr. Goldenson urged also the establishment of a weekly paper “whose sole purpose should be the dissemination of the knowledge of Judaism.”

He stressed the importance of revising the liturgy.

Rabbi Abraham J. Feldman of Hartford, Conn., said that adults as well as children need education. As chairman of the educational committee he said religious education alone is not sufficient.

“Parents as well as their children must be urged to educate themselves, broaden their vision, and enlarge their objectives in life,” he declared.

Speaking of adult Jewish education, Dr. Leon Fram of Detroit urged through study of Jewish history and exhorted Jewish parents to set an example to their children in seeking higher education and in developing Jewish cultural aims and ideals.

Such a course, he said, will increase respect for Jewish schools. Twenty-five large schools in various cities are now giving advanced instruction to over 5,000 adults he reported.

Rabbi Morton M. Berman, director of Jewish education of the Free Synagogues of America, declared Judaism is something more than a religion.

“Acceptance of this view ought to bring about a revolution in studies and in methods in Jewish schools,” he proceeded.

“Palestine is the centre of Jewish civilization, not merely the remote ancestral home of the Jew. Jewish children should be taught more about Jews, their history and their religious and social tenets.”

(If you prefer to look at images of the full original article, the quote starts at the bottom left of this first image and continues at the top left of the second.)

Thanks to Laurel for locating the original article. As we can see, the quoted text did appear in the New York Times on June 15, 1934. I wanted to point out some important context that makes the excerpt somewhat misleading, and conflicts with Evan's characterization in the question's title.

Not the answer you're looking for? Browse other questions tagged world-war-ii nazi-germany antisemitism .

10
Did Jews claim to be asians to Imperial Japan?
125
Did the Nazis kill Jews with gas chambers?