An interesting study as summarized on a PT blog:

According to a 2014 study published in Computers in Human Behavior, most people aren't using social media to be social. Only about 9 percent of Facebook's users' activities involve communicating with others.

Instead, most users consume random pieces of content. And researchers found that passively consuming information isn't fulfilling or satisfying.

Study participants experienced a sharp decline in their moods after scrolling through Facebook. Interestingly, they didn't experience the same emotional decline when they surfed the internet. The toll on mental health was unique to Facebook.

Through a series of studies, researchers concluded that by the time people log out of Facebook, they feel like they've wasted their time. Their remorse over being unproductive causes them to feel sad.

The same PT blog cites a more recent (2016) paper (and actually gives a link to this one, unlike the 2014 one) which proposed a different explanation for the Facebook-induced sadness, namely friends envy, especially for users that have a more consumer/passive participation. I'm actually less interested in untangling an underlying factor (in this Skeptics question) than confirming that a sadness-inducing effect is common for Facebook users.

It didn't take me long to find a 2017 study to the contrary of the main effect... actually they found a weak one moderated by neuroticism, and so they pulled out the moral-panic yellow card (quoting from their discussion section):

In the realm of video games, there is a warning sign that the scientific community is involved in creating the moral panic over violent video games by selectively reporting research that fits pre-existing beliefs, publication biases (i.e. null findings are more difficult to get published than significant findings) or using small effects to derive strong conclusions on intervention (For a review, see Ferguson, 2013b).

There is a question whether such moral panic exists in psychological research on social media. Contradictory to the popular claim of “Facebook Depression”, the present study found no significant correlation between Facebook and depressive symptoms in an age and ethnic diverse sample. The observed effect size, even for the neurotic participants (ß = 0.22), is quite small

In addition, two of the most well-reported stressors associated with Facebook use (Facebook social comparison and envy) were not found to moderate the association between Facebook use and depressive symptoms.We are cautious that any conclusions about clinical and educational practices and the optimal amount of social media uses are not warranted at this stage. Future research could consider to do a meta-analytic review on the Facebook-Depression linkage with sufficient use of publication bias analysis to examine the overall association between Facebook use and depressive symptoms

I guess this goes into the bin of controversial social psychology topics, for now.

A survey of 1,500 14 to 24 year olds in the UK, published by Royal Society for Public Health (RSPH) and the Young Health Movement (YHM), found that Instagram, Snapchat and Facebook were the three worst social media platforms for having negative mental health effects on children. The report states that this might be related to depression, but there may also be links to an increase in cyberbullying, worsening sleep, and feelings of social isolation and anxiety. 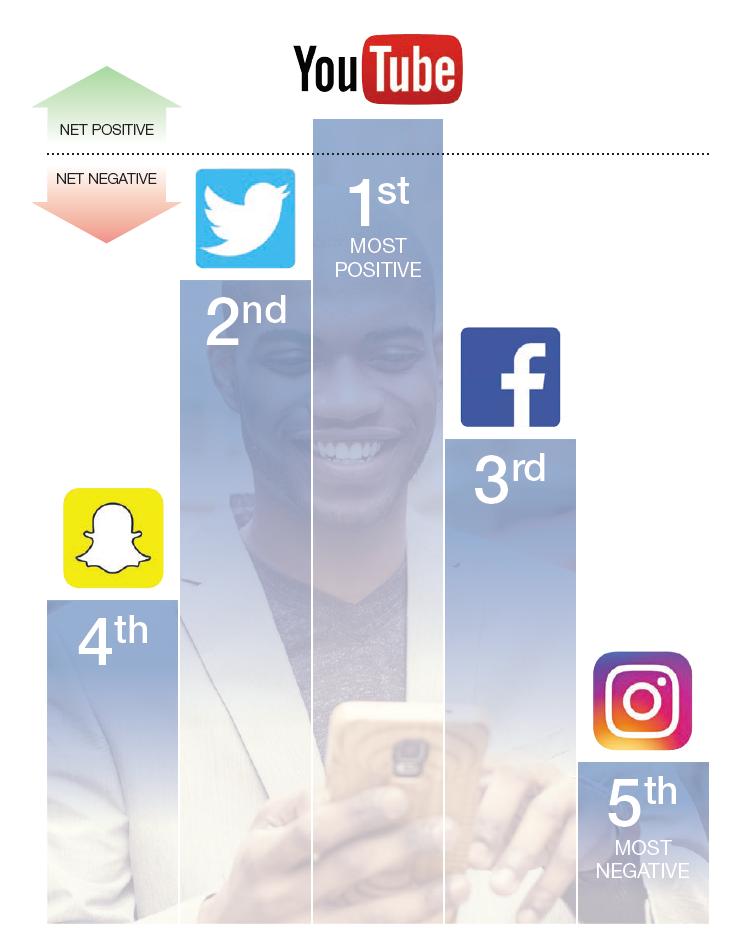 And for each they have somewhat more informative detail graph. I'll only add the Facebook one here: 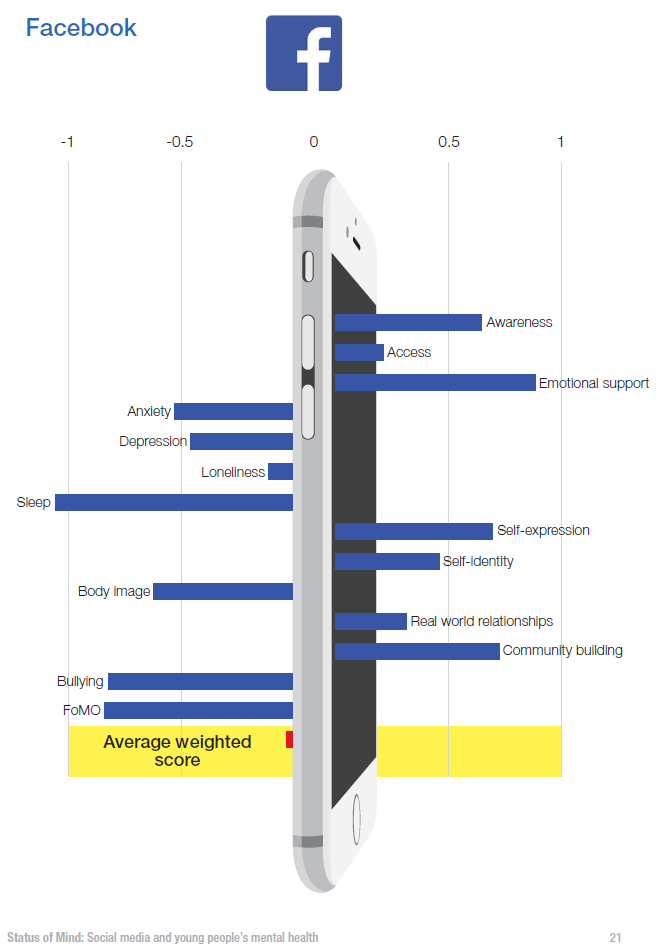 The non-YouTube sites actually have a pretty similar profile, with only intensity (rather than polarity) variations for depression. Only YouTube (among these sites) "undepressed" users. Alas the report lacks any actual numerical data; maybe there's an accompanying dreary academic publication reporting it, but I haven't found it.

20
Beer goggles: Can alcohol make people look more attractive?
8
Does our brain make ourselves look five times more beautiful than we really are?
30
Are psychopaths more intelligent than people in general?
17
Does smiling make us more happy?
16
Does the Facebook smartphone app listen to users through the installed phone's microphone?
11
Did Facebook allow Netflix, Spotify, and the Royal Bank of Canada to read users' private messages?