Did a senior U.S. Justice Department official state that 3- and 4-year-olds can learn immigration law well enough to represent themselves in court?

The following article—dating from March 5, 2016—in The Washington Post titled, “Can a 3-year old represent herself in immigration court? This judge thinks so.” is now making the rounds across the Internet in light of current U.S. immigration policy that is separating parents from children. Screenshot of actress Alyssa Milano’s tweet—which is where I first learned about this—at the bottom of this post for reference.

The article is fairly stunning when it states the following quotes attributed to Jack H. Weil, a longtime immigration judge:

He repeated his claim twice in the deposition, also saying, “I’ve told you I have trained 3-year-olds and 4-year-olds in immigration law,” according to a transcript. “You can do a fair hearing. It’s going to take you a lot of time.”

These quotes apparently come from “…sworn testimony in a deposition in federal court in Seattle.”

But as odd as these claims are, I can’t seem to find a solid context for the deposition for the quotes provided. And the article itself almost glosses over the details and specifics past the shocking quotes.

That said, the judge in question is quoted in the article as saying the following; note that while he states the quotes were “taken out of context” no actual context is give:

Weil, in a brief email, said his statements don’t “present an accurate assessment of my views on this topic” and were being “taken out of context.” He said he would need Justice Department permission to speak further and did not respond to subsequent emails.

So that said, are there any primary sources—or solid secondary sources—that can provide a clearer context for these quotes and claims? 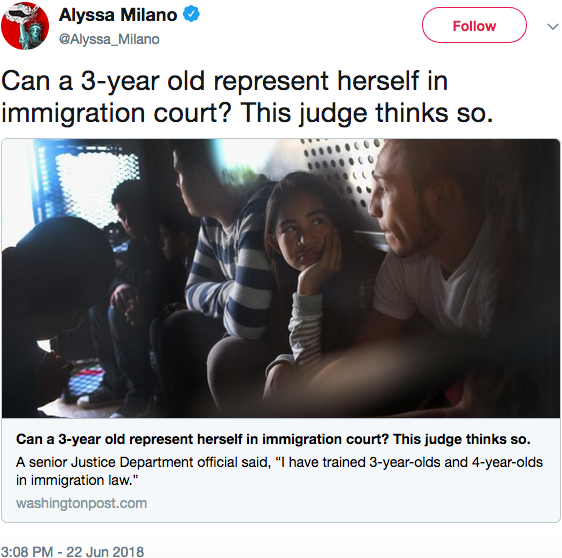 The full context of the quote can be found in the document JEFM v. Lynch-Deposition of Honorable Jack H. Weil. Here's part of the document, starting on page 69, line 24—or page 18 of the PDF:

Q. It must be true that there's some children that are so young that even if they receive the notice and even if they're given an explanation by the judge, they're still not going to understand what's going on; right?

Q. I understand that you think it can be done. Are you aware of any experts in child psychology or comparable experts who agree with the assessment that three and four year olds can be taught immigration law?

A. I haven't read any studies one way or another.

Q. So what do you train judges as to cases in which communication is impossible because the child is too young?

A. What we train is if a respondent, child or adult, cannot perform functions necessary for the hearing to be fair, the judge should not proceed.

Q: Can you imagine a case where there isn't an attorney and the case is very complex, the child is very young and capacity is very limited where there's no safeguard, short of representation, that would allow the child to get a fair hearing beside obviously stopping the case?

A. You're asking me to speculate about a fact pattern that -- I've already told you that a large majority, almost -- a large majority have an adult present. I've told you about all the resources we have. I don't know whether -- in those cases, in every case, an immigration judge can slow down and spend a lot of time and continue the case. I've told you I have trained three year olds and four year olds in immigration law. You can do a fair hearing. It's going to take you a lot of time. But I really think that a great alternative to terminating a case for a child who may be eligible for relief where there's no counsel is proceed very slowly, very carefully, and I'm going to tap every single resource I can to see if I can get the some help.

Not the answer you're looking for? Browse other questions tagged united-states law immigration .

15
Do illegal immigrants in the US get a bus ticket to wherever they have family or friends?
31
Is Idaho forcing pastors to conduct same-sex weddings or face penalties?
8
Would lowering the speed limit in NYC by 5mph lower the number of pedestrian deaths by a factor of 2?
17
Did Ivana Trump claim under oath that she had been raped by Donald Trump?
55
Was a 15-year-old teen sentenced to 15 years because he took 5 seconds to stop intercourse with an 18-year-old?
2
Is immigration the cause of bad traffic on Queenslands M1 freeway?
6
Do illegal immigrants commit more murders than mass shooters?
12
Did Kentucky cut polling locations by 95% due to lack of volunteers?