Are crime rates up by 10% in Germany?

On June 18th and 19th, 2018, the President of the United States, Donald Trump tweeted that the crime rate in Germany has increased:

Has the crime rate in Germany increased by 10% since, say, 2015 which was the beginning of the so-called "European migrant crisis".

These statements are not supported by the official data.

Number of registered crimes in Germany

I am German and I have here a original statistic source, which I copied (screenshot) for easy access of yours. I hope the numbers are convincing. It's from the latest (May '18) "Polizeiliche Kriminalstatistik" of BKA (Federal Criminal Police Office).

The image is from a table at page 10. From top to bottom translation are (don't beat me for correctness):

Overall Crime numbers have indeed decreased, but there are categories of violent crimes that have increased during the last few years. 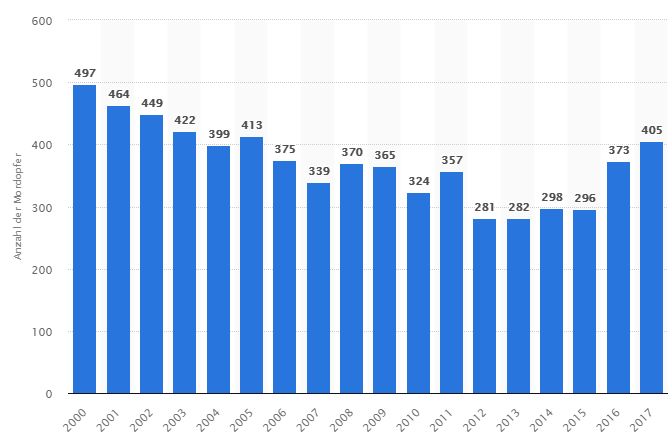 In 2017 there was a massive increase of cases of rape and sexual assault that were reported to the police (it should be noted though that the German criminal law regarding sexual assault was reformed at the end of 2016, which likely resulted in a higher rate in 2017 and makes comparisons less meaningful). 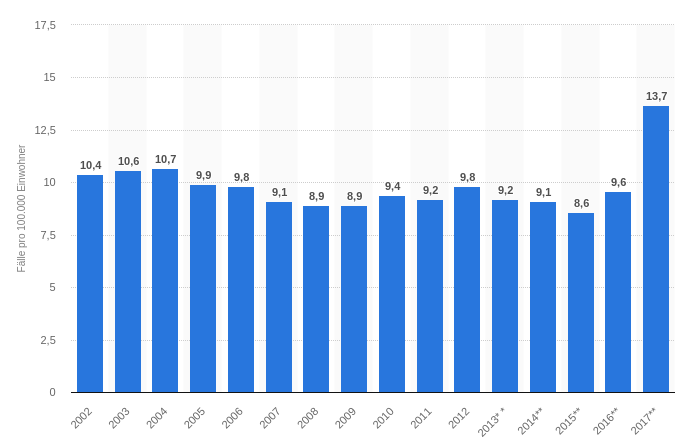 Statista creates graphs from the statistics published in the "BKA PKS". It's a summary of all crime statistics by the German police itself.

Yes, they are an accurate summary of violent crime statistics.

From AP article (in Chicago Tribune)

The recent influx of mostly young, male migrants into Germany has led to an increase in violent crime in the country, according to a government-funded study published Wednesday.

The study used figures from the northern state of Lower Saxony to examine the impact of refugee arrivals on crime in 2015 and 2016, a period when the number of violent crimes reported increased by 10.4 percent.

From January 2018 article "Violent crime rises in Germany and is attributed to refugees" carried by Reuters:

BERLIN (Reuters) - Young male refugees in Germany got the blame on Wednesday for most of a two-year increase in violent crime, adding fuel to the country’s political debate over migrants.

Violent crime rose by about 10 percent in 2015 and 2016, a study showed. It attributed more than 90 percent of that to young male refugees.

the referenced study cited by both AP and Reuters is available in German (PDF warning). There is little reason to doubt these news outlets have reported the findings accurately. Please note that the articles characterized the study as "government-sponsored", whatever that means in Germany's context.

From the study done by Pfeiffer, p 91:

At the end of the evaluations, we would like to return to the starting point. After seven years of continuous decline in violent crime, both in Lower Saxony and in Germany as a whole there was a significant increase in the number of violent crimes registered by the police for the first time during the two years 2015 and 2016. Using Lower Saxony as an example, we have shown that the new development is largely based on the immigration of refugees. For Germany as a whole, Federal Minister of the Interior de Maizière also confirmed this on the basis of the PKS data for 2016.
Accompanying footnote: Press conference of 24 April 2017 on PKS 2016, but the Federal Minister of the Interior used the term "immigrant" here because many federal states subsumed the refugees under this generic term.

It should be noted that the author of the study is highly respected in most circles and at the same time heavily criticised for his work and alleged biases in other circles. In this case the actual number of 10% is given for Lower Saxony and for the whole country this source just extrapolates and gives "a similar trend" but no actual number.

This is from the chapter: 5 refugees in Lower Saxony as victims and perpetrators of violence –– 5.1 The increase in violent crime in Lower Saxony since 2014 - is there a connection with the strong influx since 2015?"

And for overall registered cases of violent crimes the 10% pop up again::

After a seven-year period of decline, the number of violent crimes registered by the police in Lower Saxony has risen significantly again for the first time (+10.4%) in 2015 and 2016. A PKS data analysis carried out by the LKA Niedersachsen shows that 92.1% of this increase is attributable to refugees. Parallel to the large wave of refugees that began in September 2015, the number of cases solved with suspected asylum seekers increased 3.4-fold between 2014 and 2016. This can partly be explained by the fact that the number of refugees registered in Lower Saxony has more than doubled since 2014 (+117.0%).
p81-2

This addition is just quoting the material from the study. It does not evaluate the study! Note also that "solved crimes" is not the same as committed crimes!

For even more perspective from the same study: 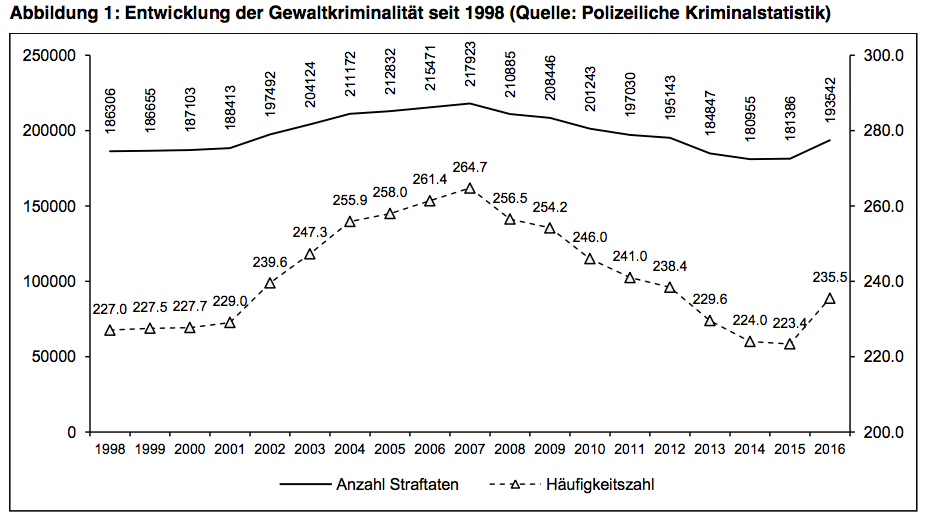 Comparing this with statistical data provided by the Federal Police of Germany (BKA) for the entire state gives the following numbers/diagrams: 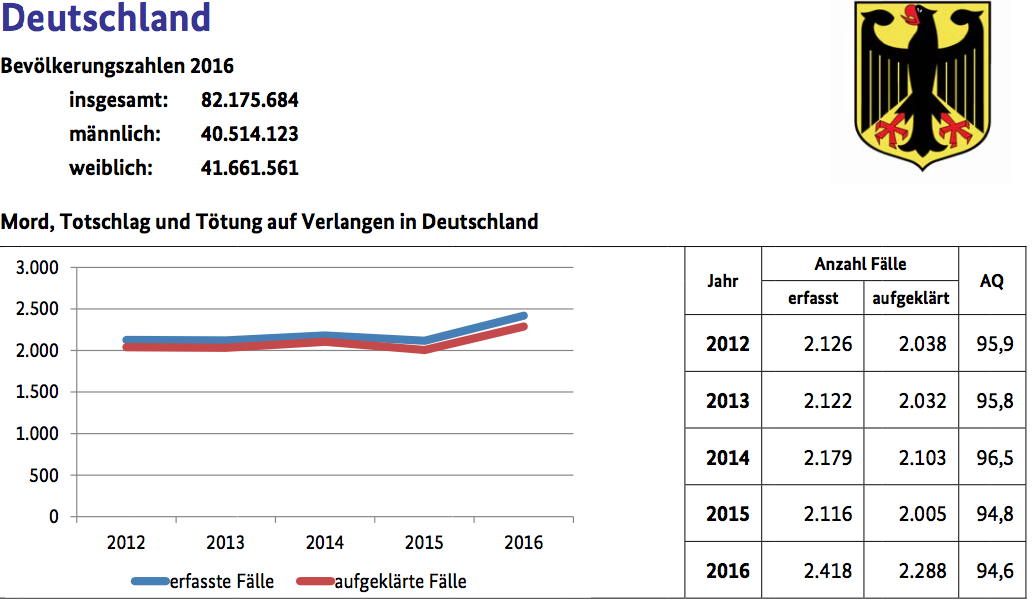 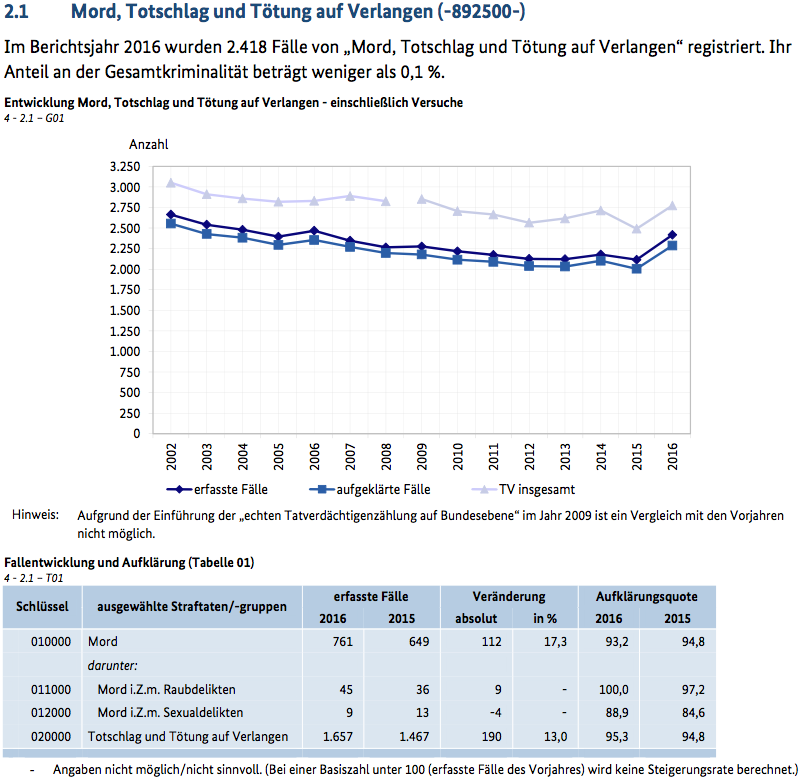 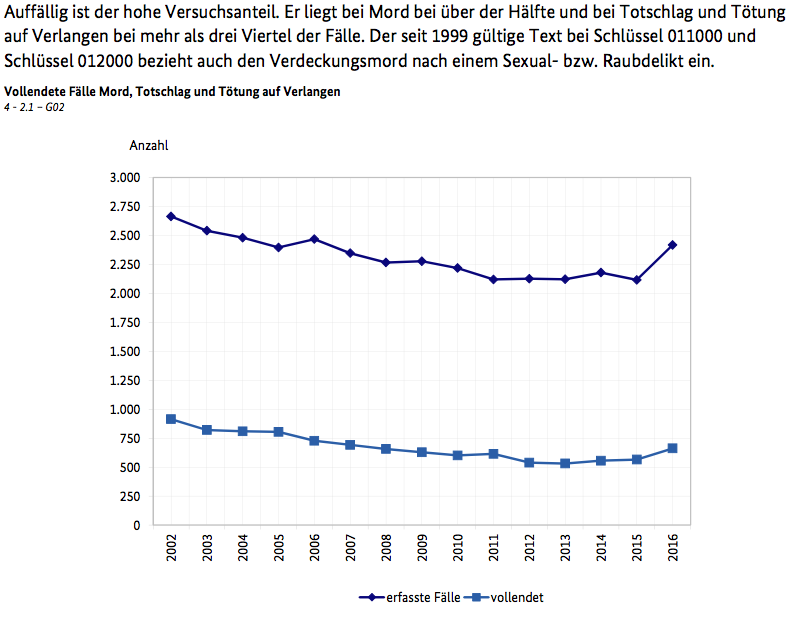 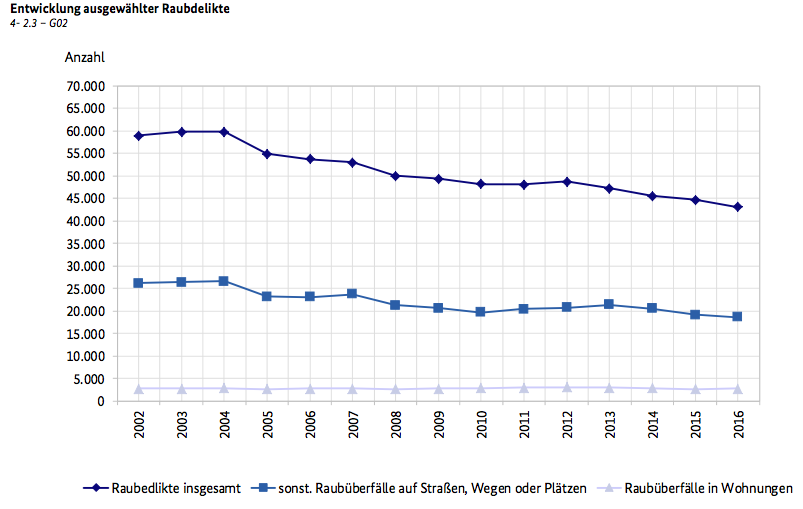 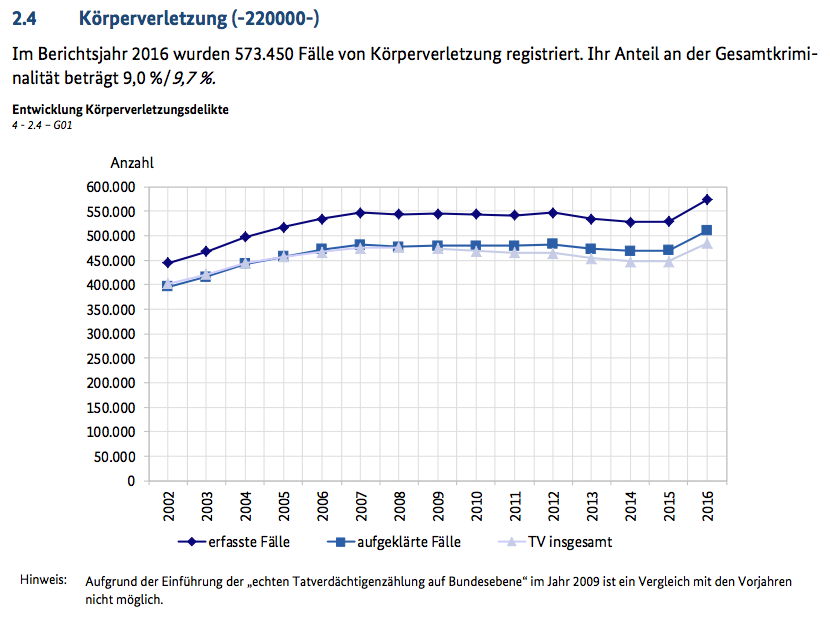 But overall "crime" is summarized by the same institution as

One thing not done, but something that would have been useful, is comparing these crime rates, bot in their relational as well as absolute numbers with those statistics from the US!

TL;DR: Available data is insufficient to give a definite answer, but likely pretty accurate.

As I see a lot of answers focus on the PKS ("Polizeiliche Kriminalstatistik", an official report from the German police). An excellent article on Spiegel online discusses why this report on it own is practically worthless (ironically in an article debunking Seehofer's claim that safety has been increasing. Note, Seehofer is the German secretary of the interior from the Bavarian party CSU, a person often enough compared to Trump).

To quote some relevant information:

Crime committed inside prison are counted towards the districts they are committed in. Often these are fairly small offences like breaking the seal on a television.

Just counting the cases the Federal Prosecutor's office - which are only responsible for a portion the investigations into terrorism - is responsible for, the number of cases being initiated has increased from 68 in 2013 to 1200 in 2017.

This may also be what trump is referring to when he wrote "that the officials do not want to report these numbers". Well, they are being reported, just not in the main report.

In criminology, the science related to crime, the consensus is: The PKS is no more a "proof of work regarding the law enforcement agencies".

The last year was - if you want to call it that - the year in which the PKS debunked itself. Last year the police registered 293k alleged criminal offences from 174k immigrants, that had recently entered the land. And even including these cases from immigrants the total number of crimes only increased slightly. How is this possible? Was the rest of the population suddenly a lot more law abiding, that even nearly 300k additional cases of crime didn't cause an increase in the total number?

So basically the number reported by the PKS depends more on the number of law enforcement employees than committed crimes. The percentile distribution of different kinds of crime within the statistic is probably a better indicator of how crime is evolving.

A report from the state office of criminal investigation in Lower Saxony states the following:

While this report only focused on lower Saxony it seems rather unlikely that crime rates fluctuations deviate much from the German average. An increase from 29.2% to 32.1% is roughly a ten percent increase.

Just as a remark:
The "BKA PKS" statistics have to be evaluated with a lot of caution. Those numbers are not adjusted or filtered. They represent the cases known to the police, even those with no further investigation. New or altered laws are not taken account of. Execution orders ("Arbeitsanweisungen"), different interpretations of newer laws and emphasis on which and how to enforce different laws differ from state to state.

Furthermore, the police statistics uses different categories for crimes then the justice ministry.

Solved Cases in the "BKA PKS" translates to known cases which are now closed for the police. The case could be dismissed or someone was found to be charged and is now a case for the justice department. They still might be not guilty and the case might be reopened be the police.

One article on the problems with those statistics (german): https://meedia.de/2018/04/03/messerangst-in-mitteleuropa-oder-warum-die-kriminalstatistik-nur-dann-nuetzlich-ist-wenn-man-sie-versteht/

More details to the shortfalls of the "BKA PKS", the pitfalls of reading those numbers and how it is instrumentalized one way or an other. https://www.zeit.de/gesellschaft/zeitgeschehen/2017-12/sexualstrafrecht-sexismus-debatte-zahlen/seite-5 (the other pages of this article are also interesting in regards to sexual assault crimes)

As for the increase in rape and sexual assault crimes. One possible factor for the 2017 spike could be #metoo by increasing the known assaults to the police and so altering the statistics. But thats just a guess.

I needed to pick something simple but meaningful to focus on. Here are the yearly case counts (2014-2017) from www.bka.de for police reportings within Germany.

Not the answer you're looking for? Browse other questions tagged politics criminology germany .

67
Did Donald Trump say republicans are the dumbest voters in the country?
6
Is large Muslim immigration within an European country a cause for higher sexual violence in that particular country?

12
Has Cologne's city council declared the town center a "no-go" zone for women?
34
Are there 2-3m illegal migrants with criminal records in the USA?
45
Was the Obama administration responsible for the decision to move the US embassy in London and the sale of the old location?
10
Has president Trump been "very strict on Commercial Aviation"?
15
Is Netherlands no longer able to start war without permission from Germany?
9
Does the Caravan have Middle Easterners?
10
Did Trump reveal the identities of a SEAL team in Iraq?