Did Hillary Clinton say that North Korea requires experienced diplomats rather than tweets?

A meme has been making rounds on the internet recently with a quote attributed to Hillary Clinton: 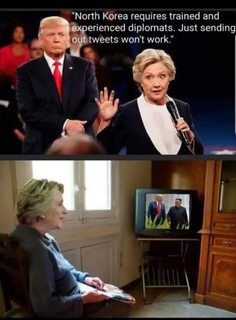 Is it true that Clinton actually said that in the past?

She has expressed those ideas. But I could not find a reliable source for her saying those exact words together. And she certainly didn't say anything of the sort during the 2016 debates which are pictured in the image, so the image is misleading in that respect. (The transcripts are readily available and can be searched.)

Google Translation back into English:

"The US is no longer talking about human rights. The Ministry of Foreign Affairs is being eroded. If you want to talk to Kim Jong-un about his nuclear weapons, you need experienced diplomats. People who know the files and North Korea, speak the language. Those people are gone. You can not have diplomacy without diplomats. That danger is not recognized by the Trump government. "

And on May 2, 2017, NBC News quoted her as saying, in a public interview at an event for Women for Women International:

“Negotiations are critical,” Clinton said of the efforts to achieve peace with the nuclear-armed nation. “But they have to be part of a broader strategy, not just thrown off on a tweet some morning that, ‘Hey, let’s get together, you know, see if we can’t get along and maybe we can, you know, come up with some sort of idea.’ That doesn’t work.”

Of course, the image's implication that tweets did work and experienced diplomats were not required, as demonstrated by the June 2018 summit (pictured in the bottom image), is a matter of opinion on many levels. Certainly experienced diplomats were involved in setting up the summit, and it remains to be seen to what extent the summit will improve US-NK relations or lead to North Korea's nuclear disarmament.

Not the answer you're looking for? Browse other questions tagged quotes hillary-clinton north-korea .