Did more gay men die in NYC during the AIDS crisis than US soldiers in Vietnam?

This Tumblr post, which has accumulated over 3,000 notes, claims:

During the 1980s, more gay men died in New York City during the AIDS crisis than all recorded deaths of American soldiers in Vietnam.

Wikipedia cites US News to say that the number of US military casualties in the Vietnam war is 58,318. However, I cannot find a number on the number of deaths from AIDS in NYC during the AIDS crisis.

Since it is probably impossible to filter the AIDS death count to only gay men, I believe that all AIDS deaths would help address the claim as best as possible.

False (but it's still a lot)

Government archives also put the total number of US military fatalities in Vietnam at around 58,000.

The New York City Department of Health provides the statistics for AIDS cases and deaths in NYC from 1980 to ~2014. The second chart in that PDF has the following data in particular: 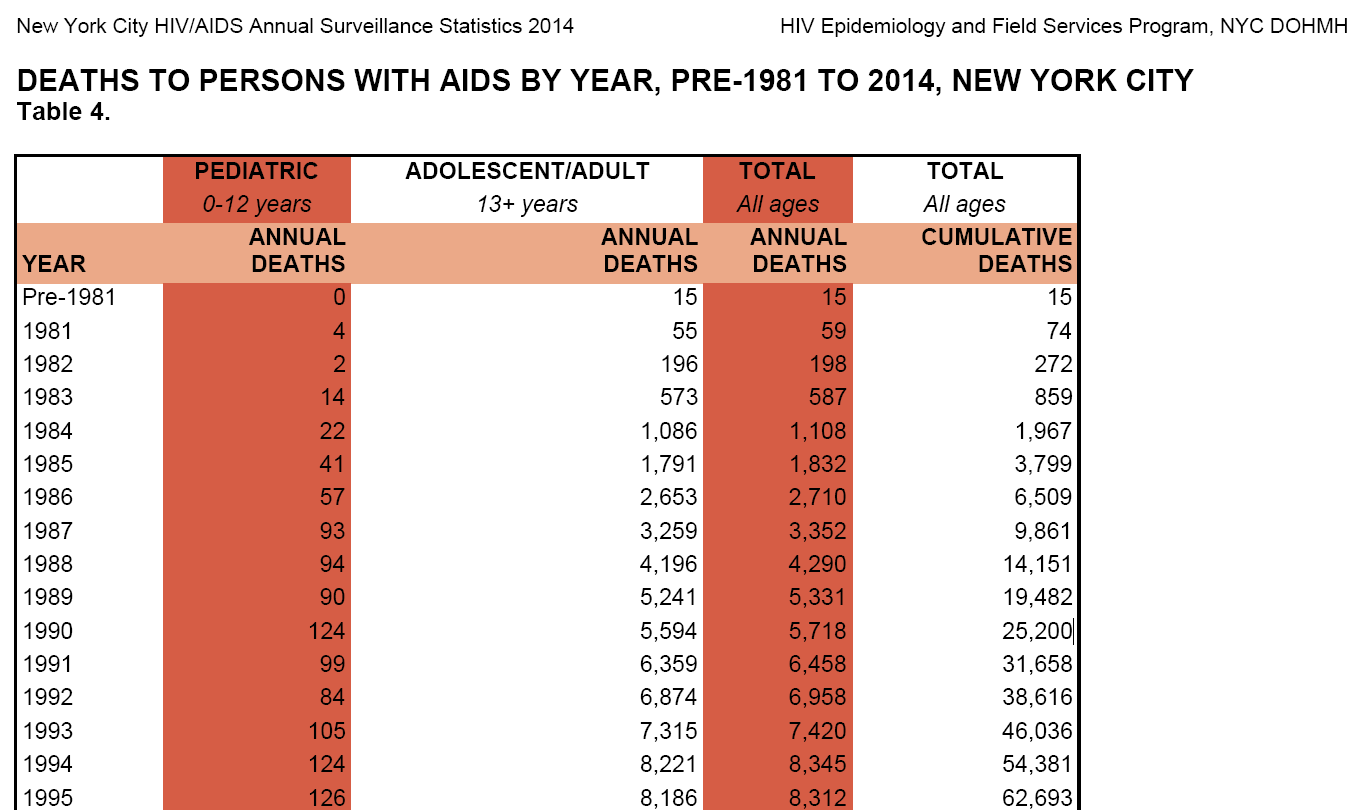 You can see that in the 1980s there were 19,482 cumulative deaths from AIDS in NYC, and the cumulative total did not exceed 58,000 until 1995. Moreover, this is all AIDS deaths, regardless of sexual orientation, gender, age, or source of infection.

Data indicates that about 65% of all AIDS cases in New York City involved transmission via homosexual intercourse (about 27% were from IV drug users). To achieve 58318 deaths at 65% of the population would put the total deaths at ~90,000, and the aforementioned statistics show this total was not achieved until 2004. And by that point the disease was no longer affecting the same demographics in the same ways it had during the 80's, so it was probably longer still until 58,000 gay men died of (or at least with) AIDS in NYC.

The original Tumblr post has been edited to disavow the claim ("this post is from 2014 I have NO IDEA what statistic i could have possibly been referencing ... edit again: I think it was probably this") and link to http://www.amfar.org/thirty-years-of-hiv/aids-snapshots-of-an-epidemic/, which gives running totals of AIDS deaths for the entire USA for each year from 1981 through 2004. According to these numbers, AIDS deaths passed up the total number of US military personnel killed in Vietnam in 1988, with 61,816 deaths. 1988 is within the "AIDS crisis" period as I understand that term.

That many deaths in eight years for the entire USA, including all diagnosed cases (not just gay men), is a much more plausible claim on its face, and amfAR appears to be a credible source. I think it's likely that the original Tumblr poster was confused by the reference to New York City in the 1988 section of the amfAR article ("In New York City, new AIDS cases that result from shared needles exceed those attributable to sexual contact").

EDIT: It occurs to me that the comparison above is still not fair: if one side is "all deaths due to HIV/AIDS in the USA", then the other side ought to be "all deaths attributable to the Vietnam War", not just US military deaths. That is a controversial number, but even if we take the lower end of the range (1.5 million according to R. J. Rummel), Vietnam's death toll is still more than twice as high as AIDS-in-the-USA as of the end of 2017 (combining amfAR's numbers with more current stats from the CDC I get 550,000).

Not the answer you're looking for? Browse other questions tagged hiv-aids vietnam-war .

15
Were younger people more likely to support Vietnam war than people older than 50 years old in the 60s?
32
In the USA, is AIDS most prevalent in the gay male population?
13
Did an experimental Oral Polio Vaccine (OPV) cause the AIDS pandemic?
9
Do 62% of gay men diagnosed with AIDS practice unsafe sex?
6
Did more Vietnam vets kill themselves after the war?
105
Did 20% of US soldiers in Vietnam use heroin, 95% of whom quit afterwards?