Is this graphic depicting Trump and Hitler accurate? 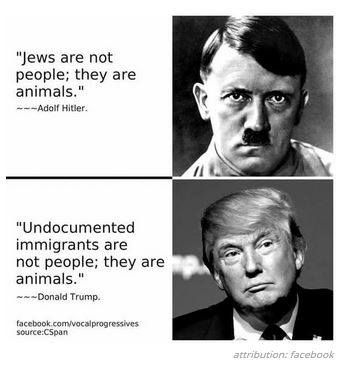 This graphic has been spreading around social media the last few weeks; its sentiment echoed in USA Today among other places. Snopes has weighed in, but I find the article unsatisfying. It calls the claim a "Mixture" and dings it for neither quote being literal (duh), and something about him referring to MS-13, even though he never mentions the gang in the full paragraph. So maybe Skeptics can do better.

Evaluate the claim. Did Trump say this sentiment sufficiently similar to how Hitler said it, as implied in the graphic?

Here is the actual quote by Donald Trump, in context, as per the White House transcript, linked from the Snopes article:

SHERIFF MIMS: Thank you. There could be an MS-13 member I know about — if they don’t reach a certain threshold, I cannot tell ICE about it.

THE PRESIDENT: We have people coming into the country, or trying to come in — and we’re stopping a lot of them — but we’re taking people out of the country. You wouldn’t believe how bad these people are. These aren’t people. These are animals.

It's true that Trump did not mention MS-13. But his comment was in response to another comment that did.

Not the answer you're looking for? Browse other questions tagged quotes donald-trump adolf-hitler .