The photo in question (Death of a Loyalist Militiaman, Córdoba front, Spain (1936)) can be found here at The International Center of Photography and is also attached below.

The question is: The core power of this photo is Robert Capa managed to capture a shot of a man at the moment of death in the middle of war. For years, the photo has been undisputedly been considered authentic. But since the 1970s, some dispute has arisen as to whether the photo was faked or not.

The core conceit is that many war photographers were not granted easy access to he battlefront during Spanish Civil War (1936-39), thus the vast majority of photos to come out of war were staged in some way. As this 2006 article from PBS’s American Masters site on Robert Capa explains:

The allegation that Capa had posed his photograph was first made by O.D. Gallagher, a South African-born journalist, who, as a correspondent for the London Daily Express,had covered the Spanish Civil War, at first from the Nationalist (Franco) side and later from the Republican. Gallagher told Phillip Knightley — who published the story in his book The First Casualty: From the Crimea to Vietnam; The War Correspondent as Hero, Propagandist, and Myth Maker (1975) — that “at one stage of the war he and Capa were sharing a hotel room.” (Knightley does not tell us where or when during the war Gallagher had shared a room with Capa.) Gallagher told Knightley that at that time “there had been little action for several days, and Capa and others complained to the Republican officers that he could not get any pictures. Finally . . . a Republican officer told them he would detail some troops to go with Capa to some trenches nearby, and they would stage some manoeuvres for them to photograph.”

The article goes on to conclude O.D. Gallagher’s assessment was wrong and assert the following:

There can be no further doubt that The Falling Soldier is a photograph of Federico Borrell García at the moment of his death during the battle at Cerro Muriano on September 5, 1936. May the slanderous controversy that has plagued Robert Capa’s reputation for more than twenty-five years now, at last, come to an end with a verdict decisively in favor of Capa’s integrity.

But then in 2009 new doubts arose due to the supposed location of the photo. This comes from The New York Times:

In “Shadows of Photography,” José Manuel Susperregui, a communications professor at the Universidad del País Vasco, concludes that Capa’s picture was taken not at Cerro Muriano, just north of Córdoba, but near another town, about 35 miles away. Since that location was far from the battle lines when Capa was there, Mr. Susperregui said, it means that “the ‘Falling Soldier’ photo is staged, as are all the others in the series taken on that front.”

And this comes from The Guardian:

Susperregui's research, published in his book Sombras de la Fotografía, provides compelling evidence that "The Falling Soldier" was photographed in Llano de Banda, an area of countryside close to the small village of Espejo, southern Spain, some 25 miles from Cerro Muriano.

So… I am still confused. The three conceits at play here—as I read it—is as follows:

So is there any solid evidence that either proves this photo to be real or faked? 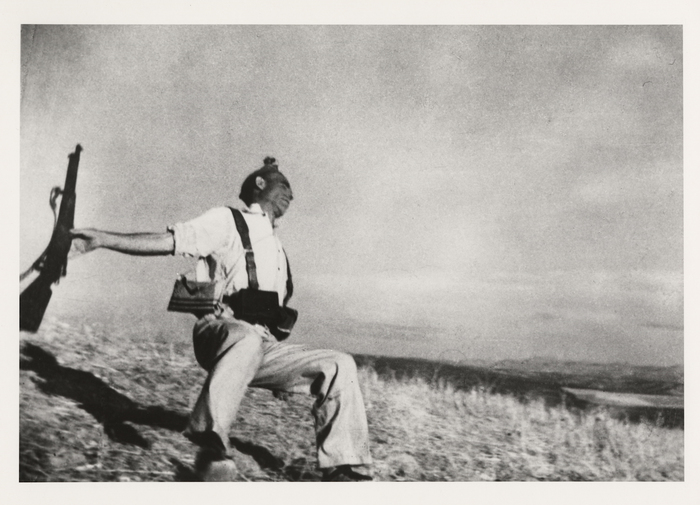 11
Was the Patterson Bigfoot Film Faked?
26
Was 19 the average age of a combat soldier in Vietnam?
24
Was Chinese water torture ever used as a torture method?
16
Did doctor/journalist Sanjay Gupta perform brain surgery on a wounded soldier in the heat of war?
9
Did Niccolo Machiavelli advocate to fake your own death?
31
Was this Indian from British India the first to strike Berlin during World War I?
20
Did Stalin kill more than 10 million People?
7
Was the death rate in Boer War concentration camps the same as in Glasgow?