Can Genesys' solar amplifier generate 40kW of power from a 200W solar panel?

Genesys currently has a press release on their home page discussing a new US patent:

Genesys, LLC has demonstrated a working prototype generating up to 40 Kilowatts from one standard solar panel with certified third-party validation along with being granted a US Patent

They go on to claim their future product

will be able to produce 20KW of power, 24 hours a day, using only one standard 200-watt solar panel.

Is this claim plausible?

High electrical powers are generated using the eRET’s super convective current generator that relies on a reservoir of high energy charges generated from the conversion of solar photons to electrons.

This is not how solar panels work, or really any energy generation technique. The photon passes energy to an already existing electron, elevating its energy state.

The generated electrons form a high-speed current whose energy carrying capability far exceeds anything an equivalent copper wire can achieve.

I don't know enough about electricity to know if 20kW is too much for a standard cable, but from some poking around, it appears it is. But this seems irrelevant - you can't use the power if you can't get it into your house, so at some point it has to be down-stepped to a usable voltage/amperage. And since copper wire is used for power transmission, not power storage, this statement seems like a useless distinction.

As a by-product of the accelerating electrons, electromagnetic radiation in the form of waves are created which can be tailored to selective frequencies in order to perform different functions such as telecommunications or chemistry.

I suppose you could characterize raising an electron's energy state (exciting it) as accelerating it as it moves faster. However, even if the electron were not excited, EM waves would still be generated. And yes, you can use different frequencies of this radiation to perform different work. But I'm pretty sure you expend the electrons in applying this energy to work, and this is no different than any existing process that converts electricity to work. I'm honestly not sure what is being claimed here, but it does not seem novel.

The electromagnetic wave that is produced can be manipulated to crack water vapor because water vapor possesses certain frequencies that absorb energy to a high degree, leading to the breakdown to hydrogen and oxygen.

As you can do with any electricity. Again, not sure what here is novel.

Using the eRET, nearly all commercial chemicals from petroleum or other fossil sources can be produced using hydrogen, which is a product of the eRET, and carbon dioxide.

To translate: using electricity, carbon, hydrogen, and oxygen, you can create large numbers of useful chemicals. This is how they are made now.

Cascade process, like nuclear fission? Also, at some point, in order to use the energy, that current has to utilize copper wires, so I'm not sure what value this has here. He's comparing either an energy generator or energy storage device to an energy transmission device - its unclear which.

In fact, that is the problem that underlies much of what is on the site. Is this a power generator or a power storage device? Is it both? If it is, what part of it is he talking about in each claim? Does it also integrate some power transmission technology? Because all of the claims comparing it to copper wire seem to indicate as such. So do you have to replace all of your home's wiring to use this?

Looking at the accompanying picture, it seems that the eRET takes power from the solar panel, some water (from any source, so it doesn't even have to be pure), and performs magic to create these high energy electrons. It appears to do so by breaking the hydrogen out from the water, which takes power (it doesn't generate it). Yet his system claims to not only produce hydrogen, but actually amplify the power received from the panel, thereby having the cake and eating it too. This, again, is PFM.

Also, they clocked the electrons? I think it's easier to just do the math. As you pump energy into an electron, it goes faster. Hydrogen at room temperature has electrons at a low energy level where they travel at around 1% of the speed of light. At 220,00eV they travel at around .9c. .2c means thy have somewhere between 10 and 11 KeV I think, based on this calculator. So, he's excited electrons. I'm not sure if this is a lot compared to typical energy generation, but again it doesn't seem relevant as the numbers are meaningless to practical application (powering your house) without significant math to convert electron speed into eV, then into wattage.

This could go on, but I've wasted way more time than I should on this bunk.

One red flag that's pretty clear in the diagram on the site is the hydrogen storage aspect. 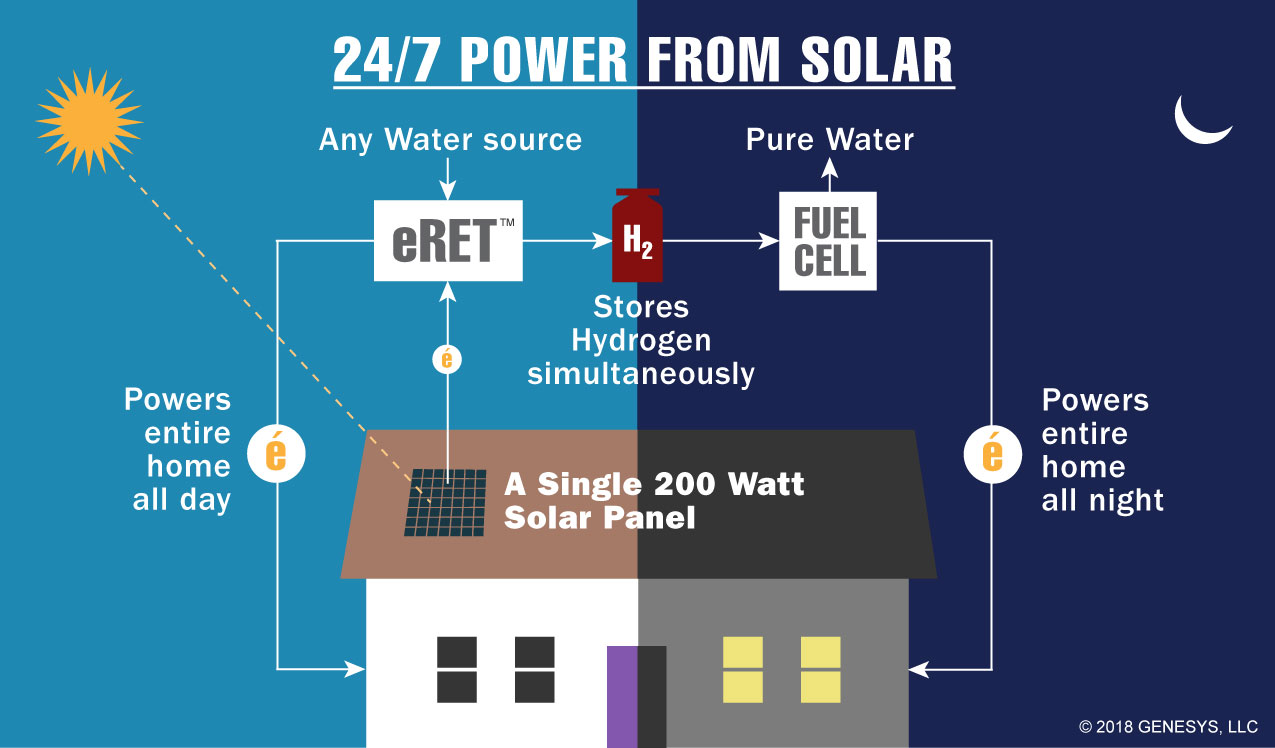 A 200 watt solar panel isn't going to power an entire home all day. Adding a device to split the water into hydrogen (and oxygen), eRET(?) requires additional electricity. Simultaneous hydrogen storage while powering the entire house is an absurdity.

"high energy electron current" is more gibberish. "generates electric currents using a cascade process rather than..." but no detailed information about the alleged cascade process. Curiously, the piece goes on to say that the electrons are created from the sun, perhaps that's the phony cascade process.

The third party has apparently bypassed ordinary physics. Unless one is discussing superconductors, there is always measurable resistance. Perhaps they are using equipment that is not sufficiently sensitive, disqualifying the results.

Another impressive yet unbelievable claim. According to one source, the electron around the hydrogen atom travels at one percent of the speed of light. How do their engineers manage to increase the speed of other element's electrons to such a great extent?

Another source suggests that electrons in a copper wire with a current of 10 amperes will travel at an approximate speed of one-quarter of a millimeter per second. That fifteen millimeters per minute is a long way from being twenty percent of the speed of light.

It gets better when you begin to calculate in the hydrogen aspect of the funny science. This source quoting Steve Hench, Former Scientific Staff Member, Los Alamos National Laboratory, says the following:

It is important to note that for an electrolytic process that the output voltage of the solar cell (or array) should be properly matched to the electrolyzer cell stack.

a 200 watt panel, assuming (incorrectly) 20 percent efficiency running for an hour would generate substantially less than 10 cc of hydrogen. This also presumes that the solar panel is not powering the entire home all day.

This borders on the Brown's gas generator system that many people believe.

200 Wp (Watt-peak) is the nominal power of the solar panel.

It means that the solar panel produces 200W of power when the module has a temperature of 25°C and is under an irradiance of 1000W/m². See "standard test conditions" in IEC 60904-3.

At night, a 200 Wp panel produces exactly 0W and during a cool, sunny day, the panel can produce a bit more than 200 W if it has the right inclination.

With mirrors or lenses, it's possible to concentrate the sunlight to increase the power output per module area. This method might help boost the overall efficiency by a few % but it surely cannot multiply the solar panel output by 200.

This system would be useless but it means that the answer to the title question is "Yes, at least in theory".

The supercap described above didn't violate any law of physics. But the system described by Genesys surely does.

PVWatts Calculator is a tool provided by NREL to estimate the output of a photovoltaic system.

According to this tool, a 0.2kWp system in a very sunny location (e.g. Phoenix, AZ) would produce around 340kWh / year.

Whatever their system is, Genesys is lying by a factor of at least 500.

Not the answer you're looking for? Browse other questions tagged power-generation .

6
Can one generate enough electricity from a plant to power a cellphone?