Can one estimate accurately the time until sunset using the width of one's fingers?

I've now heard from a friend and read about a claim online, which I find unlikely:

You can estimate the time until the sun sets by using your fingers. By extending your arm fully and placing your hand above the horizon, you can count the number of finger widths between the horizon and the sun, where each finger width represents approximately 15 minutes until dusk, and a whole hand 1 hour.

I understand that this is just an estimate, but I can't imagine it working for everyone or for most places on the globe. For instance, I live in a more mountainous area of the US and the sunset usually is when the sun hides behind the mountains and not just a horizon. The math seems sketchy at best. 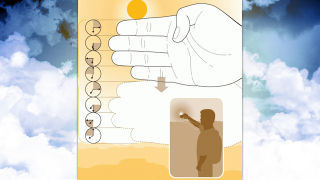 And for citation purposes and further reference: source of picture and explanation of the "lifehack"

This works, but there is one detail missing, and depending on your latitude the picture could be misleading. The sun moves approximately one finger width across the sky each 15 minutes, but the sun does not necessarily set vertically down onto the horizon. You have to use your hand to measure the distance the sun has to travel along it's path, not the distance above the horizon. At latitudes and seasons where the sun sets at an acute angle to the horizon, it would take a bit of practise to get it right.

How does this work

Angular size of a finger

A typical human has an arm about a meter long, and a pinky finger about 1.5cm wide (ref, and hopefully you have one you can measure). 1.5cm at one meter is a little over one degree. Three middle fingers is about 5 degrees, and across a closed fist is about 10 degrees. The image in the question suggests an arms length finger is 15 minutes or 3.7 degrees. This seems a bit high, but might work if the wrist is and elbow are bent, bringing the the finger closer to the eye than in the examples in the references. It will also make a difference if the arm is held out straight ahead, or held to the side and the head turned.

Sun path across the sky

Unless you are in the tropics at just the right time of year, the sun does not drop directly into the horizon. The sun sets when it hits the horizon (and it gets dark when it gets 6, 12 or 18 degrees lower, depending on definition). So if you want to measure the distance the sun will travel until it sets, you have to measure along the right path.

Putting it all together

At 15 degrees per hour the actual speed is more like three fingers in 20 minutes for a typical person, but you could be more accurate by "calibrating" your arm length and finger width. And you need to measure along the sun's path, not the height above the horizon. Estimating that path will be easy in the tropics where the path is nearly vertical, and harder in the arctic where it is at a small angle to the horizon, as a small mistake in estimating the angle makes a bigger difference in path length. But if you get that right, it does work.

Not the answer you're looking for? Browse other questions tagged astronomy geography science .