Does each car in inner London cost society £8,000 in health and environmental cost over its lifetime?

The topic of air quality is getting a load of attention in newspaper headlines in the days leading up to Clean Air Day (21st June, apparently).

For example, The Independent reports a recent study on the cost of pollution caused by cars:

In total, the scientists concluded the health cost of an average car in inner London over the vehicle’s lifetime was nearly £8,000. For diesel cars this figure was nearly double...

...Air pollution is linked to about 40,000 premature deaths each year in the UK, compared with 98,000 preventable deaths a year which are attributable to smoking, the report said.

Previous questions here have addressed the 40,000 premature deaths number but is this new estimate of the total cost to society of pollution from cars any more robust?

The report looks at the whole of the UK but concludes London has the worst effects. For the sake of this question, though, lets stick to the headline number: is the estimated cost to society of each car in inner London really £8,000?

TL;DR Yes, though only within a narrowly defined meaning: a petrol car driven only within Inner London, that drives an average distance for UK cars over its lifetime, will on average cause - through its pollution - health and economic damages valued at around £8k.

The actual figures in the report are much more varied, complex and useful, varying between £1.8k and £24k for cars and vans driven an average amount over their lifetimes, with the amount depending on the vehicle type, where they are driven, and what fuel they use.

background on the report and its method

The full report is this pdf. It's written by two academics who are specialists in the field, and work in reputable universities. It's well-referenced predominantly to the academic literature. One of the authors, Christian Brand, has a track record of solid work in the field. (Disclosure: I am currently working on a project with him)

The method takes estimates of the total costs of pollution, and takes the proportion of those costs and attributes it to traffic, in linear proportion to the quantity of pollutants - it pro-ratas the costs to the source of pollution. The study also provides a range of costs, taking both a bottom-up and top-down approach. It is consistent with the international studies that it cites, and includes discussion of the uncertainties and omissions in the calculations. It bases its calculations on figures from authoritative sources (COMEAP, Royal College of Physicians)

While the latter scenarios are somewhat unrealistic they highlight that location, source and vehicle technology are all important factors for the valuation of health costs in the UK (and elsewhere)

As figure 3 from the report shows, the costs vary depending on fuel, vehicle and location: 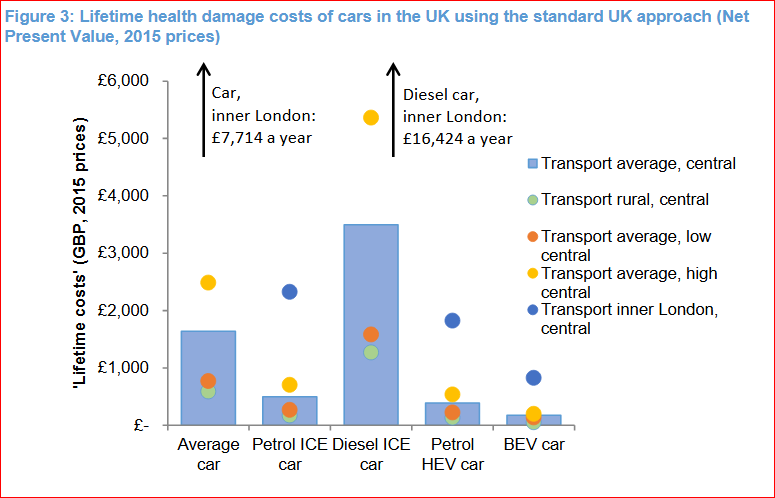 From the Oxford University Press Release on the study:

Dr Alistair Hunt, Lecturer in Environmental Economics, University of Bath, said: ‘Our research for the first time illustrates the individual cost that each car and van has on the NHS and wider society ... equivalent to £7,714 for an average inner London car over its lifetime.’

So that's why the journalists have run with this one example number taken from a rich, complex report.

NB1 this is a brand new study. It will take time for the academic community to digest, analyse and publish responses to, and commentaries on it. Therefore, at time of writing, this answer can only consider the report on its own merits, and within the context of parallel literature. Within those constraints, the report's findings show integrity and usefulness. However, the media reporting of it has focused on one number which relates to a scenario which is a radical simplification of a subsection of cars in the fleet. To the reporters' credit, they haven't taken the single largest number (£24k per van driven only in Inner London) nor the single smallest number (£1.8k per petrol car driven only in rural areas) in the report. They have led with the one number that the university press release picked out.

NB2 the claim is about an average (mathematical mean) car. You've asked about each car. The answer to your question is obviously "no" (as some cars are barely ever driven), but that's not what the claim is about anyway. It's important to read and understand the claim as it was written - this sort of rephrasing which distorts the original intent, is bound to lead to misunderstandings.

12
Is the EPA's regulation of particulate matter justified with evidence?
5
Does particulate pollution in outdoor air kill tens of thousands every year?

6
Does Daylight Savings Time lead to an increase in car accidents and work related injuries the week afterwards?
15
Does 80-90% of the environmental and health damage a car causes come from manufacturing?
5
Does particulate pollution in outdoor air kill tens of thousands every year?
4
Is air pollution reaching a crisis point?
2
Have few, if any, studies on the health effects of particulate air pollution measured the actual exposure to particulates?