Have more Americans been killed in schools than in military service this year?

I've just come across a tweet by @spectatorindex that reads:

In 2018, more Americans have died in schools, with twenty-nine people killed, than in military service, where thirteen troops have been killed.

Are those figures true?

Yes, the statement that more Americans have been killed in schools than military service thus far in 2018 appears to be accurate. The exact numbers in the tweet are inaccurate, and the comparison isn't entirely reasonable and might mislead into thinking the risk to a schoolchild might be similar to that of military personnel.

Initial estimates put the number killed at Santa Fe High School at eight. (The death toll has since risen to 10.) We can compare that to figures for the military compiled from Defense Department news releases, including both combat and noncombat deaths. Even excluding non-students who died in school shootings (for example, teachers) the total still exceeds military casualties.

A large part of that is the mass shooting at Marjory Stoneman Douglas High School in Parkland, Fla., on Feb. 14.

This is not usually the case. In 2017, the number of fatalities among service members was far higher than the number of people killed in school shootings, according to The Washington Post data.

The numbers are a bit tighter than 29-to-13 if you include accidental military deaths: 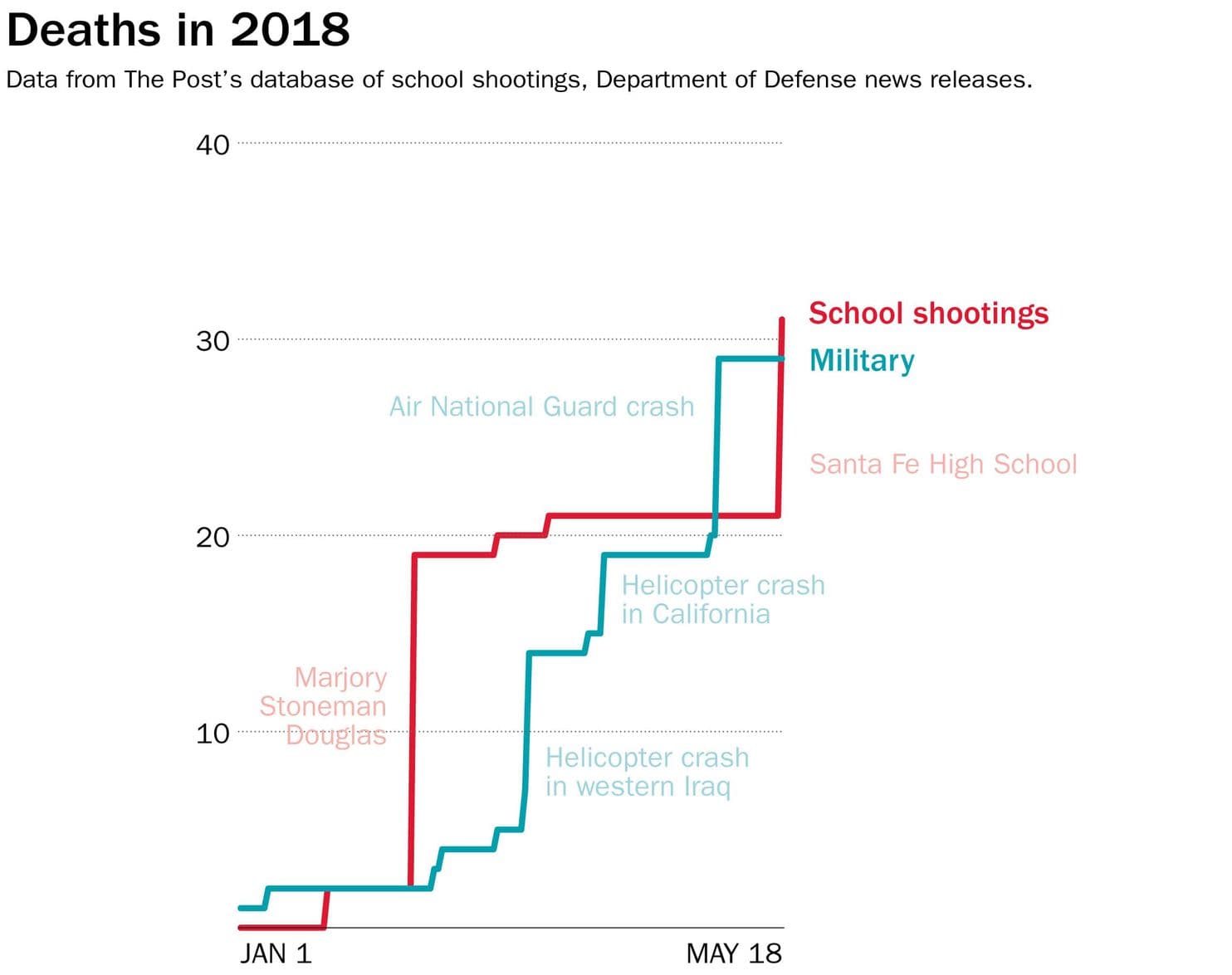 ... and it's important to remember that on a per-capita basis, the military remains far more dangerous:

The figures for 2018 do not suggest schools are more dangerous than combat zones. After all, there are more than 50 million students in public elementary and high schools and only about 1.3 million members of the armed forces. So far in 2018, a member of the military has been about 40 times as likely to be killed as someone is to die in a school shooting, including Keller’s revised figures.

11
Did 2.5 million Americans serve in the Afghanistan and Iraq wars from 2001 to 2013?
30
Are Americans ignorant of geography and the world?
9
Are there 141 US Counties that have more registered voters than residents?
18
Is a tow truck driver killed every six days on average in the US?
9
Did a man get heckled for dressing up as a Nazi—and dressing up his son as Adolf Hitler—at a local Halloween event in 2018?
15
Will the US military receive a 10% pay raise in 2019?
31
Has the flu already killed 20,000 Americans during 2019-20 flu season?
17
Is Covid-19 the biggest ever killer of Americans (mutatis mutandis)?
45
Are unusually many people dying after being vaccinated for COVID-19?