Has the Javan devil leaf nettle (urtica urentissima) been shown to cause any deaths?

According to Sir Stephen Tallents, writing in The Spectator, 12 March 1943:

The sting of a certain Java nettle, for example, may last for a year and is reputed even to cause death.

Mrs. M. Grieve, writing on Botanical.com repeats the claim but mentions the species:

A Java species, U. urentissima, produces effects which last for a whole year, and are even said to cause death..

The claim is more specific on countryfile.com:

Elsewhere, a native species on the Indonesian island of Java produces similar, but more potent results that can last for months and have even caused the death of some of victims.

An identical claim is made in this QI article on stinging nettle:

A native species on the island of Java produces similar, but more potent results that can last for months and has caused the death of some of victims.

Further claims can be found on the world wide web. The part of the claim that the pain can last a year is denied by an article on herbsorganic.co.za, but this does not address the lethality claim.

The common name of Urtica urentissima is devil leaf, according to the FDA poisonous plant database. I assume that the three quotes that do not mention the species are all referring to the same species of nettle.

The aforementioned articles appear to be repeating vague claims, or to be plagiarising each other (countryfile and QI have suspiciously similar formulations). None report to any reliably documented cases. Is it accurate that the devil leaf nettle (urtica urentissima) has been shows to kill any of its victims?

biology safety plants
Share
Improve this question
edited May 1, 2018 at 1:41

No. Not directly and not without serious doubts. There were botanical misidentifications in taxonomy of the plant and for the aetiology of the consequences of a sting as well.
The worst urticaria species known contains chemicals that may well kill a human, but while indeed extremely painful the mode of delivery and concentrations make that not very likely as a result from stings.

Note that the nettle sting is thought to cause something like tetanus. While we now know that Clostridium tetani or better its toxins are responsible for tetanus, this was not known when the above reports and books were written:

Tetanus was known to ancient people, who recognized the relationship between wounds and fatal muscle spasms. In 1884, Arthur Nicolaier isolated the strychnine-like toxin of tetanus from free-living, anaerobic soil bacteria. The etiology of the disease was further elucidated in 1890 by Antonio Carle and Giorgio Rattone, who demonstrated the transmissibility of tetanus for the first time. They produced tetanus in rabbits by injecting their sciatic nerve with pus from a fatal human tetanus case in that same year.

These scary tales are repeated over and over. But while bacteria from soil and animals can now be found where ever one looks, the nettle is hard to locate.

As of 2018 neither Wikipedia nor the Royal Horticultural Society do really know this species:

Despite its popularity in eso-tales:

Rudolph Steiner called the Nettle plant 'Heart of the world' because it radiated healing energy to people and the plants around it. Lelord Kordel said about Nettles 'The sting of Nettles is but nothing compared to the pain that it heals'. The sting of Urtica urentissima is said to last a year. Fortunately, this claim is untrue.

But this seems to be just because the taxonomy changed?

This explains the lack of finds for the old name.

Dendrocnide is a genus of 37 species of shrubs to large trees in the nettle family Urticaceae. They have a wide distribution across Southeast Asia, North East India, Australia and the Pacific Islands.

They are colloquially known as stinging trees, stinging nettles or nettle trees. One Australian species, Dendrocnide excelsa (giant stinging tree), can grow to over 40 metres in height, but the dangerous Dendrocnide moroides (gympie-gympie) is only shrub-size.

Looking into the toxicity track record for this endangered species:

Grows in tropical and subtropical regions of Asia and Australia. Unlike most nettles, the sting can last for weeks or months and it can cause breathing trouble. Old, dry branches that have been sitting around for several decades can still do harm. (From Amy Stewart: "Wicked plants: The Weed that Killed Lincoln’s Mother and Other Botanical Atrocities", Algonquin Books: Chapel Hill, 2009.)

But the principle is the same with "our" stinging nettle: burn hairs inject the irritant chemicals.
But in these genera there is a twist to it. The most painful sting is said to be delivered by

Wikipeda: Dendrocnide moroides (Gympie):
Toxicity D. moroides fruit
Contact with the leaves or twigs causes the hollow, silica-tipped hairs to penetrate the skin. The hairs cause an extremely painful stinging sensation that can last anywhere from days to years, and the injured area becomes covered with small, red spots joining together to form a red, swollen welt. The sting is famously agonizing. Ernie Rider, who was slapped in the face and torso with the foliage in 1963, said:

For two or three days the pain was almost unbearable; I couldn’t work or sleep, then it was pretty bad pain for another fortnight or so. The stinging persisted for two years and recurred every time I had a cold shower. ... There's nothing to rival it; it's ten times worse than anything else.

However, the sting does not stop several small marsupial species, including the red-legged pademelon, insects and birds from eating the leaves.6

Moroidin, a bicyclic octapeptide containing an unusual C-N linkage between tryptophan and histidine, was first isolated from the leaves and stalks of Dendrocnide moroides, and subsequently shown to be the principal compound responsible for the long duration of the stings.
There has been anecdotal evidence of some plants having no sting, but still possessing the hairs, suggesting a chemical change to the toxin.

The effects appear to be quite extreme:

This plant's excruciating sting can drive humans mad, or even kill 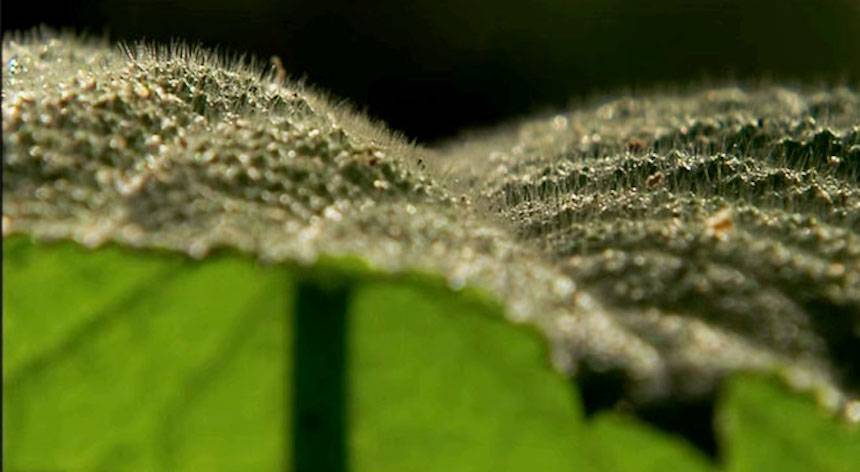 The extreme itching is so painful that it has been known to kill dogs, horses, and drive humans mad with agony.

And the most active toxic peptide

WP: Moroidin Anti-mitotic agent
Moroidin has shown to have anti-mitotic properties, chiefly by inhibiting the polymerization of tubulin.11 Tubulin protein polymers are the major component of microtubules. During mitosis, microtubules form the organizing structure called the mitotic apparatus, which captures, aligns, and separates chromosomes. The proper alignment and separation of chromosomes is critical to ensure that cells divide their genetic material equally between daughter cells. Failure to attach chromosomes to the mitotic apparatus activates the mitotic checkpoint, preventing cells from entering anaphase to proceed with cell division. Agents that disrupt microtubules therefore inhibit mitosis through activation of this checkpoinnts.

Moroidin and its related compounds, the celogentins, inhibit tubulin polymerization. Of this family, celogentin C is the most potent (IC50 0.8×10−6 M), and it is more potent than the anti-mitotic agent vinblastine (IC50 3.0×10−6). Moroidin has the same potency as vinblastine. Because of this biological activity, compounds in this family have potential as anti-cancer agents.

The mechanism of tubulin disruption is not known, but the degree of biological activity has been linked to the structure of the right-hand ring containing the Trp-His linkage. Moroidin and the celogentins can be divided into three groups according to structural similarity of the right-hand ring. Celogentin C, the most potent compound, has a unique right-hand ring containing a proline residue. Moroidin and its analogous celogentins all have activity comparable to that of vinblastine, and a third group of celogentins all have reduced activity. In contrast, stephanotic acid, a cyclic compound analogous only to the left-hand ring and containing the same Leu-His linkage, has no anti-mitotic activity.

Interestingly, other anti-tubulin agents used as chemotherapy agents have painful side effects known as neuropathy when the drugs are exposed to tissue. Although the exact mechanism for the cause of neuropathy is unknown, it is thought to be related to the degradation of microtubules, which are essential components of neurons.

There seems to be one death report in the literature, from a less potent species (H. Winkler: "Die Urticaceen Papuasiens", 1922) (Cf.: Dianne Watters: "Toxins and Targets: Effects of Natural and Synthetic Poisons on Living Cells and Fragile Ecosystems", Taylor&Francis, 1992, p120. Same single death report mentioned, but easier to access in Painful Sting After Exposure to Dendrocnide sp: Two Case Reports. )

But reports like these remain anecdotal. Neither comorbidity of real tetanus infection nor anaphylaxis from allergic reactions are anywhere controlled for. With a severe enough allergic reaction any plant may be considered deadly. (Cf two case reports that resulted in ICU care: Skin contact with a stinging tree requiring intensive care unit admission. But also note that the treatment with morphine and diazepam on top of the recreational methamphetamine might make interpretation of this phenomenon slightly more complicated than would be desirable.)

The mentioned species was not properly studied when it got its name. It is not the worst of all nettle plants. No human deaths are properly and conclusively attributable to this species. Early case reports linking the species to tetanus or tetanus-like symptoms are unreliable and the toxins from these genera are different. Even the most wicked nettle plant has no deaths associated reliably with its sting.

Not the answer you're looking for? Browse other questions tagged biology safety plants .

28
Has any cure come from embryonic stem cells?
20
Has HIV ever been isolated?
14
Has olanzapine (Zyprexa) caused 200,000 deaths?
17
Has the Gympie Gympie tree driven humans to commit suicide because of the pain from its sting?
5
Has the Orca infant mortality rate been 100% since the Fukushima disaster?
20
Does nuclear power cause fewer deaths than other forms of electricity production, accidents included?
10
Has president Trump been "very strict on Commercial Aviation"?
2
Has 2017 been the safest year in commercial aviation?