Do women talk more than men?

I heard many times that women talk more than man. Sometimes numbers were included: women talk, on average, 25.000 words per day; men talk only 15.000.

Are women more talkative than men?

There are a lot of books written on the subject that would seem to confirm that this is the case, but they are written without any scientific basis. This 2007 study published in Science of 396 men and women found no such distinction:

Women are generally assumed to be more talkative than men. Data were analyzed from 396 participants who wore a voice recorder that sampled ambient sounds for several days. Participants' daily word use was extrapolated from the number of recorded words. Women and men both spoke about 16,000 words per day.

This analysis of the paper provides an interesting point on variability within the gender groups:

In most of the samples, the average number of words spoken by men and women were about the same. Men showed a slightly wider variability in words uttered, and boasted both the most economical speaker (roughly 500 words daily) and the most verbose yapping at a whopping 47,000 words a day. But in the end, the sexes came out just about even in the daily averages: women at 16,215 words and men at 15,669. In terms of statistical significance, Pennebaker says, "It's not even remotely close to different."

This meta-analysis published in the Personality and Social Psychology Review came to a similar conclusion (emphasis mine):

Three separate sets of meta-analyses were conducted of studies testing for gender differences in adults' talkativeness, affiliative speech, and assertive speech. Across independent samples, statistically significant but negligible average effects sizes were obtained with all three language constructs: Contrary to the prediction, men were more talkative (d = —.14) than were women.

Edit to satisfy Macke's suggestion below, the first study I cited doesn't list the median, but judging from the histogram it did include, it seems doubtful that that median woman is significantly more talkative than the median man (and the sample size would probably be too small to draw anything meaningful from that if it was the case): 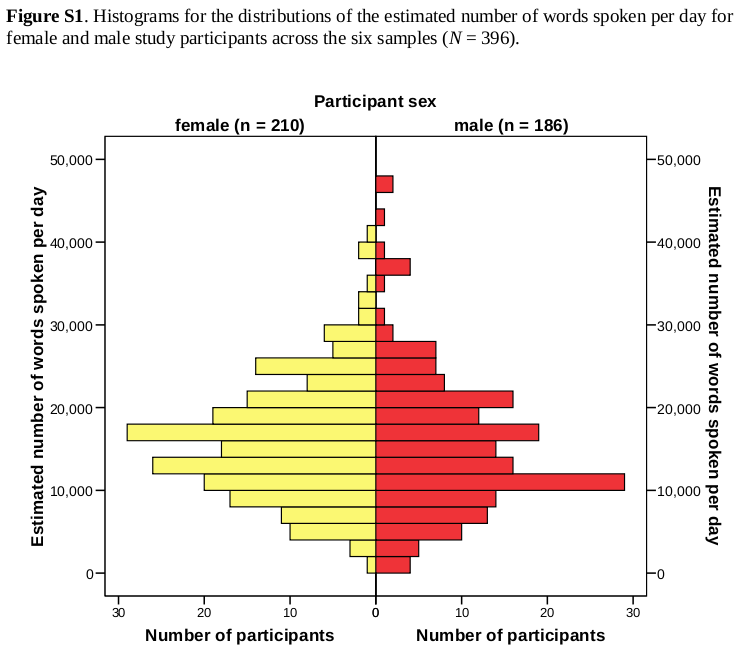 35
Do women statistically have better multitasking ability than men?

23
Do women prefer taller men?
13
Do women experience more emotion than men?
18
Do men tend to be funnier than women?
6
Do women 'consume more sustainably than men'?
45
Are men smarter than women?
4
Do women need more sleep than men?
31
Are men genetically programmed to seek multiple sexual partners more than women?
18
Are men more likely than women to accept an offer for casual sex?