Is the Implicit Association Test effective at determining an individual's biases?

A recent post on the Stack Overflow blog, Stack Overflow Isn’t Very Welcoming. It’s Time for That to Change., discusses the problems that members of marginalized groups may experience when participating on Stack Exchange. Most of the post focuses on how their background may lead them to perceive the same interactions differently than someone from a more privileged background, but one sentence and footnote appears to suggest actual racist/sexist bias in on-site interactions:

Those of us who have privilege, but care deeply about reducing bias should be uniquely positioned to help, but we struggle the hardest to recognize that we are (unintentionally) biased ourselves.²

² If you’re shaking your head thinking, “not me,” I’d encourage you to take these implicit bias tests, specifically the Race IAT and the Gender-Career IAT. If you’re like me, they’re going to hurt.

The post suggests that individuals take the Project Implicit "Implicit Association Test" to assess their own subconscious biases. I'm not sure whether it's suitable for that purpose or not.

Are Implicit Association Tests effective at determining racist/sexist bias at the single-sample level?

According to this meta-analysis of 122 research papers representing 14,900 subjects, implicit association tests can predict unconscious bias regarding intergroup behavior which would not have been predicted by conscious self-reporting of bias. However, all other forms of bias examined in the meta-analysis were predicted better through explicit self-reporting than through IAT's. Furthermore, a combination of implicit tests and self-reporting of bias results in better predictions than predictions made with an IAT alone for all types of bias.

The Study: The meta-analysis aggregated 122 research papers that examined the predictive validity of both IAT's, such as the one mentioned in the OP, and explicit tests, such as self-reporting of a subject's conscious thoughts when presented with some situation. The overall results of the meta-analysis can be seen in the following graph: 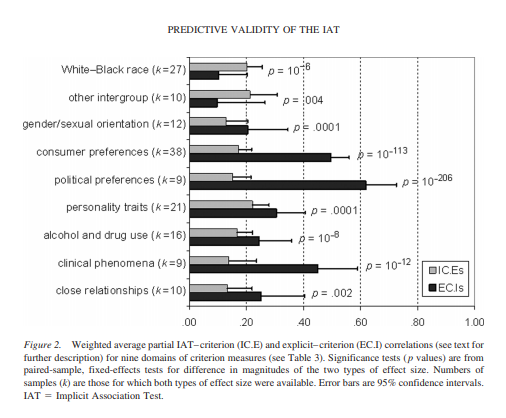 Essentially, for Black-White(and any two other groups) interracial behavior, such as whether a subject is more likely to associate weapons with black Americans or white Americans, IAT's offered a better prediction of behavior than explicit self-reporting of the subject's conscious beliefs. From the paper:

However, IAT's fail to predict bias in other areas, particularly in the fields of consumer products, political preferences, and clinical phenomena (phobias, anxieties, etc.):

Furthermore, when combined the predictive validity of both implicit and explicit tests increased when the IAT-explicit correlation (IEC) was examined:

The finding that IEC magnitude was positively associated with predictive validity for both ICCs and ECCs was expected from reasoning that, when IAT and self-report measures agree, the constructs that they measure will likely reinforce each other in determining behavior... Confirming this expectation, IEC magnitude positively predicted 29.9% of the variability of ICC effect sizes and 34.3% of the variability of ECCs (see Tables 4 and 5).

In short, unconscious interracial bias can be better predicted by IAT's than by explicit self-reporting, though other types of unconscious bias are better predicted by self reporting. Regardless of the type of bias, if the results of explicit and implicit tests match then bias can be reliably predicted. However, the predictive value for both is (far) less than 1, so a perfect prediction is not possible. Thus, an IAT cannot guarantee the bias at an individual level.

Not the answer you're looking for? Browse other questions tagged psychology racism sexism .

27
Are the "game" systems advertised by pickup-artists effective?
9
Does reading about cognitive biases improve reasoning?
8
Is the Rorschach test a reliable diagnostic tool for psychologists?
4
Is this "facial expression reading" test scientifically reliable?
14
Is the Q-on-the-forehead test a valid method of determining extraversion and ability to lie?
36
Is this a genuine 1965 literacy test?
4
Is exposure therapy is the only effective treatment of PTSD?
10
Is the association between homosexuality and mental illness likely to have a genetic basis?
48
Did a US school test ask this question about norms in Chinese culture?