Did US flags on the moon turn white? 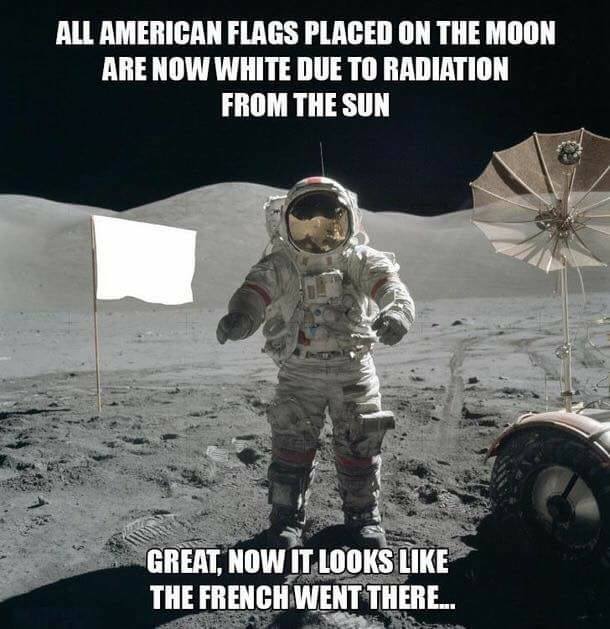 Great, now it looks like the French went there...

Did the US flags on the moon turn white?

They are either bleached white or completely disintegrated.

This NASA website repeats some expert speculation on the topic.

For forty-odd years, the flags have been exposed to the full fury of the Moonâ€™s environment â€“ alternating 14 days of searing sunlight and 100Â° C heat with 14 days of numbing-cold -150Â° C darkness. But even more damaging is the intense ultraviolet (UV) radiation from the pure unfiltered sunlight on the cloth (modal) from which the Apollo flags were made. Even on Earth, the colors of a cloth flag flown in bright sunlight for many years will eventually fade and need to be replaced. So it is likely that these symbols of American achievement have been rendered blank, bleached white by the UV radiation of unfiltered sunlight on the lunar surface. Some of them may even have begun to physically disintegrate under the intense flux.

Of the three experts quoted, this one is actually the most optimistic. All three agree that the flags would be bleached white. Two of them believe that the flags then turned to ash. The meme shows a flag that is bleached white, but otherwise intact; this is almost certainly not the case. No one has actually been back to look at the flags, and our best orbital pictures don't show the flags in any detail, so we can't know for sure.

The Lunar Reconnaissance Orbiter has been orbiting the moon since 2009 taking "high resolution" images. If you look closely at some of these images, it is possible to see the shadows cast by some of the flags. This means that those flags are still standing, but doesn't give a lot of information about their condition.

Nobody knows what colors the flags are. Experts hypothesise that the color has faded by now due to prolonged exposure to intense UV radiation, but we have no direct or indirect evidence for that. We do have evidence that the flags of Apollo 12, Apollo 16, and Apollo 17 are still standing as inferred from shadows seen on the Lunar Reconnaissance Orbiter. https://www.hq.nasa.gov/alsj/ApolloFlags-Condition.html

30
Is the Moon young?
23
Are there more mushrooms during full moon?
8
Are farmers' lunar almanacs effective?
1
Is the moon artificial?
8
Do Qur'an verse counts correspond to the moon landing date and take-off time from the surface of moon?
8
Did an Indian king claim to witness the moon split?
11
Does the 'super-moon' have a measurable effect on probability and magnitude of earthquakes?
8
Do a majority of people believe the moon landings were faked?