Is this a real quote by M. Beddow Bayly and are the vaccination claims true? 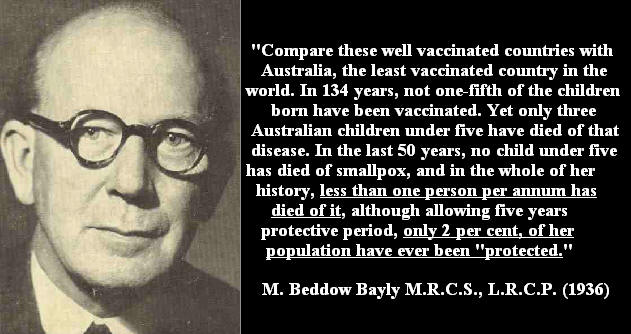 "Compare these well vaccinated countries with Australia, the least vaccinated country in the world. In 134 years, not one-fifth of the children born have been vaccinated. Yet only three Australian children under five have died of that disease. In the last 50 years, no child under five has died of smallpox, and in the whole of her history, less than one person per annum has died of it, although allowingfive years protective period, only 2 per cent, of her population have ever been "protected."

I am asking two questions:

Yes, the majority of the information in the quote can be considered correct, with the exception of claim "only three children under five have died", which is completely false.

However, it is also very misleading and carefully worded: in order to make the numbers seem small, it arbitrarily spreads the few deadly epidemics in Australia across a large timeframe, only considers children under five, and completely ignores deaths amongst the indigenous population.

Did M. Beddow Bayly say the quote? Unfortunately, as with most quotes before widespread video/audio recording we can't prove it one way or the other. He is a real person, he was alive in 1936, and he was against vaccination, so it is entirely possible that he said it.

Have only three children under five died? At least three but very likely more have died. According to the historical source I used(see below), three children died in a single outbreak, though the ages aren't mentioned:

On 12th December, 1877, it was discovered that there was a case of small- pox on board the steamer Brisbane, lying in Sydney Harbor, after her arrival in port... On 11th January two girls, members of the Holden family at Miller's Point, were taken ill, and although the City Health Officer at first declared that the disease was not small-pox, it subsequently proved to be so... On 29th January is the report that the remaining child of the Holden family died on Saturday night. Apparently three children (all of whom died), and the father, were attacked in the Holden family.

There were several children deaths for which ages were reported, and three of which were under the age of five:

On 31st March, 1888, a case of confluent small-pox in a child, aged two years, was reported at Manly, a suburb of Sydney. The child died on 6th April, and the medical man in attendance was fined for not reporting the case as small-pox.

The records of the Quarantine Station at Sydney state that 23 cases were treated there, one of them (a girl, aged 4) being fatal.

Most of the deaths in the source did not include ages, however the simple fact that three children under five were confirmed in the source means we can assume more than three actually have died from smallpox. Regardless, the 'under five' requirement is completely arbitrary and only used to make it seem more correct.

Right before submitting I realized how long this answer was. The below simply goes into smallpox cases in Australia to explain why the number of deaths and vaccinations are so low in order to show that the quote is misleading rather than false.

Australian smallpox history: Here is the full text of "The History of Small-Pox in Australia, 1788-1908", a 1914 compilation of historical notes regarding smallpox cases in Australia, and the source of the information below.

Among the indigenous population, smallpox caused many deaths:

The settlement of Australia was very definitely inaugurated by the arrival of the First Fleet on 26th January, 1788, and historical records date from that occasion. These records are fairly complete, and it is safe to assume that no event of importance escaped being recorded. It is clear from these that small-pox has attacked the aborigines of Australia on one or more occasions... this disease was attended with a very high rate of mortality, that it attacked a coloured seaman on H.M.S. Supply and no other person amongst the colonists, and that it was extensively distributed amongst the aboriginals over the continent of Australia...

However, most of those deaths would have been before the quote's unexplained and seemingly arbitrary 134 year time limit(not much happened in 1802 Australia).

Smallpox was not recorded amongst European colonists until an outbreak in 1830, during which one colonial child died, after which there were no confirmed cases until 1857:

The first recorded cases of small-pox amongst Europeans in Australia were some people who were attacked by the disease during its epidemic occurrence amongst the aboriginals in 1830... It was not confined to the aborigines, but in one instance attacked a European in the form of secondary small-pox. and proved fatal to a child with symptoms resembling confluent small-pox... The only reference to possible small-pox in Europeans between these cases and the epidemic in Victoria in 1857 is the following remark extracted from a letter published in the Melbourne Argus in February, 1877...

A smallpox epidemic occurred in 1857. Caused by infected passengers on a recently-arrived ship, vaccination and quarantine began after 16 confirmed cases of smallpox and four deaths:

The first recorded epidemic amongst Europeans in Victoria occurred in 1857, being directly introduced by the ship Commodore Perry... Sixteen cases in all occurred, including those above-mentioned, the last being reported on 24th December. There are no facts stated in the report, from which any opinion as to the source of infection in any of the later cases in Melbourne can be formed. Of these sixteen there was a fatal result in four cases... The measures adopted were very widespread vaccination, complete isolation, and such disinfection as could be carried out.

During the 6 month epidemic, there were 43 confirmed cases of smallpox infection and at least 5 more possible cases. Vaccination was very successful in preventing deaths during the epidemic:

An even larger epidemic occurred in 1881 in Sydney, during which 154 cases were reported and 40 died:

The most serious outbreak of small-pox ever recorded in Australia occurred in Sydney during the year 1881, the first case occurring on 23rd May, 1881, and the last case on 19th February, 1882. During the whole of this period of 271 days the city and suburbs suffered more or less from variola, the total number of cases amounting to 154... Of the 40 patients who died, 29, or almost three-quarters, had never been vaccinated, ten had been vaccinated in early life (of these there is only one under 17 years of age, and all had been vaccinated in infancy), and of one there is no record.

Other than the above epidemics, cases of smallpox in Australia were very isolated, and always a result of ships arriving with infected persons and those person not adhering to Australia's quarantine policies or otherwise escaping notice. Distance from potential smallpox sources and isolation policies have protected Australia(and New Zealand) from smallpox throughout its history, so widespread smallpox vaccination was never considered necessary. In modern times, smallpox vaccination has eradicated the disease in the rest of the world so smallpox vaccination is still not necessary. The last case was apparently in 1938, though they do have vaccines at the ready in the unlikely event of an outbreak.

56
Were only 10% of the population vaccinated against smallpox?

29
Are deaths "skyrocketing" due to vaccination?
23
Are there any other studies (besides the discredited Wakefield studies) that have found a link between vaccination and autism?
11
Are hepatitis B vaccines for newborns safe and cost-effective?
7
Is the WHO tetanus vaccination campaign a covert sterilisation campaign?
4
Is there correlation between vaccination rates and autism diagnosis?
1
Is this study on the dangers of vaccines peer reviewed?
20
Does this study from 2012 speak to the potential long term effects of the mRNA COVID-19 vaccines?
43
Are vaccinated children significantly less healthy than the unvaccinated, as recent study claims?
39
Are the mRNA vaccines from Pfizer and Moderna vegan?