Did people in ancient times, who survived childhood and were not killed in wars, have roughly the same chance to reach old age as contemporary people?

During an academic course on the history of biology there was a lecture dedicated to ancient Greek philosophers. I noticed that surprisingly many of these philosophers reached age considered advanced even nowadays: 80 years, 90 years and more. I expressed my surprise, noting that as far as I knew, life expectancy had been far lower in ancient times.

According to the professor, the common knowledge that in ancient times people 30, 40 years old had already been considered very old was a myth. He said that life expectancy, defined as the mean length of life had been greatly reduced in ancient times by high child mortality and casualities in many wars. However, he elaborated, people who managed to survive childhood and avoid being slaughtered in wars had had roughly the same chance to reach advanced age as contemporary people.

A similar claim can be found in a cracked.com listicle, as the #1 myth about the Middle Ages (scroll down because they are listed in reverse order).

The Reality: As for lives being short, while it may be true that the average life expectancy was 35 years, we tend to overlook one very important word there: average. Infant mortality was brutal, since vaccinations against childhood diseases didn't exist yet and medicine was still in its "Here, chew on this root and stick some leeches on your junk" stage. So that skews the average way down. But if a male living in 1500 managed to see his 21st birthday, he was expected to live around 50 more years from that point.

Is this correct? Because if it is, then how does this relate to the effectiveness of the modern medicine? And indeed, I've already heard people (in my family) using this very argument to condemn the recommendations of the WHO as "ineffective" and instead support "natural" approaches to treatment like the paleo diet.

This is only somewhat correct. Montagu (1994) did such a study, excluding infant deaths and later violent deaths, an concluded that

The length of life for a population of ancient Greek and Roman men with quoted dates of birth and death has been compared statistically with three sample populations from different periods. It was found that the ancients who were born before 100 BC lived as long as the moderns who died before 1950; they lived significantly shorter lives than those who have died in the present half century.

Montagu used a starting sample of 397 ancient individuals (with known lifespans); 99 of these did die of violent deaths. 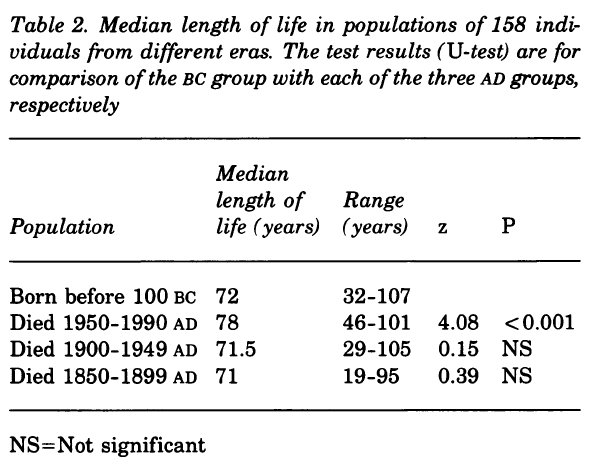 There are quite a few other studies out there about life expectancy past infancy, but most such studies do not exclude violent death later on... so not strincly what your professor claimed, although they may be interesting in the wider claim of cracked.com etc. See Griffin (2008); the numbers are generally lower, but not by a whole lot.

There is one caveat to this mentioned in Griffin:

The change in life expectancy of mature men has not changed as dramatically over 3000 years as might be expected, although this data must of necessity refer to privileged members of society.

Since someone asked about women, I could not find a paper using the same criteria as Montagu, but assuming that death by violence was less likely for women, and (given the results about men above) assuming we can take about any period before 1900 as an equally good sampling time... Rowbotham and Clayton (2008) did find lower life expectancy at age 5 for women than for men during mid-Victorian times, an inversion of the situation today, but again the difference was small:

Once the dangerous childhood years were passed, however, Victorian contemporary sources (including regional variables) reveal that life expectancy in the mid-Victorian period was not markedly different from what it is today. Once infant mortality is stripped out, life expectancy at age five was 75 for men and 73 for women. The lower figure for women reflects the danger of death in childbirth or from causes that were mainly unrelated to malnutrition. This compares favourably with present figures: life expectancy at birth, reflecting our improved standards of neo-natal care, currently averages 75.9 years for men and 81.3 years for women. Recent work has suggested that for today's working-class men and women (a group more directly comparable to the mid-Victorian population) this is lower, at around 72 years for men and 76 years for women. This relative lack of progress is striking, especially given the many environmental disadvantages during the mid-Victorian era and the state of medical care in an age when modern drugs, screening systems and surgical techniques were self-evidently unavailable.

There is a well-known contemporary source that 70 was considered old age, but not miraculous. Psalm 90:10, KJV.

The days of our years are threescore years and ten; and if by reason of strength they be fourscore years, yet is their strength labour and sorrow; for it is soon cut off, and we fly away.

[Yes, I realize the irony of citing the Bible here, but it's not a likely place to exaggerate life expectancy of ordinary folk.]

Not the answer you're looking for? Browse other questions tagged history life-expectancy .

6
Are records of people's deaths and births from ancient times wildly unreliable?

41
Were metered taxis busy roaming Imperial Rome?
10
Was Leonardo da Vinci a polyphasic sleeper?
3
Are actuarial life expectancy tables based on information that is 40 years out of date?