Are there 2400 bank robberies per year in the US?

At the beginning of the movie Den of Thieves it is stated that:

Anyway, I don't know whether HERE refers to the entire US or just the city of Los Angeles or maybe a district of it, but nevertheless, it looks pretty much and hard to believe. Considering the fact that the security considerations are becoming more and more sophisticated day to day and heisting a bank is not an easy job.

I did a little googling to see if these statistics are accurate. There was this question on quora which quoted a FBI report:

Investigation has resulted in the identification of 2,537 of the 4,900 persons known to be involved in bank robberies, bank burglaries and bank larcenies.

And I tried to reach some official documents to see the statistics, but I faced this page: 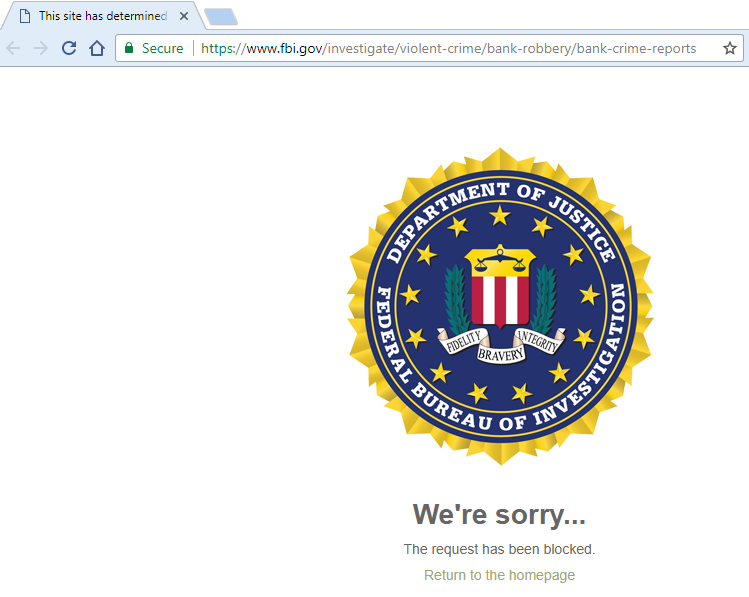 So my questions are: are those statistics true? I am also interested in knowing the trend (has the numbers been declining or increasing?) and more importantly, the meaning of HERE in that sentence (did it mean the US or just LA?)

No, there were about 4,000 bank robberies in the US in 2016 according to the FBI. I believe the 'here' in the claim means either Los Angeles or California, though it wouldn't make sense either way as the entire state of California had about 460.

Addendum: as pointed out in a comment by Reirab, and detailed by this Movies Stack Exchange question, the number of bank robberies in early-1990's Los Angeles was as high as 2,641. In 2013 there were only 212 robberies.

So, the filmmakers are simply using 25 year old data from Los Angeles' peak robbery years. If the movie had been set in the early 90's then the intro would be pretty much correct.

US Totals: According to official FBI statistics, there were a total of 4,251 crimes which were in violation of the Federal Bank Robbery and Incidental Crimes Statue. As can be seen in the below image from the paper, no part of the statistics could possibly be interpreted as 2,400 as claimed by the movie. 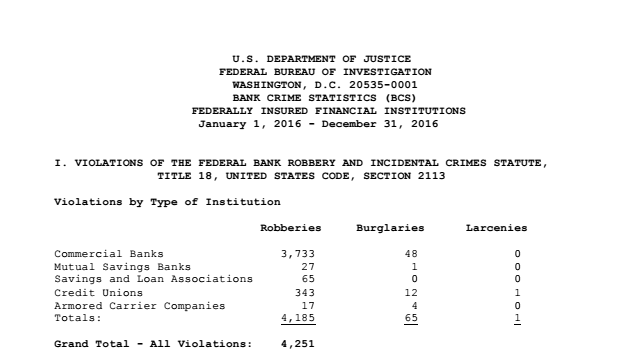 I gave them the benefit of the doubt and checked if they meant robberies during operating hours, when workers and clients could be taken hostage in typical movie style. That would also be wrong, as nearly all of the ~4000 robberies occurred during normal bank hours:

California/Los Angeles: If the opening statistics were referring to only Los Angeles or California and not the US, which might make sense given the setting(I haven't actually seen the movie), then it would also be wrong:

The above columns represent "Bank Robberies", "Bank Burglaries", "Bank Larcenies", and "Bank Extortions". There were 462 bank robberies in all of California, so the statistic cannot be accurate unless there are 6 times as many robberies than are reported, and even more than that if it's only for Los Angeles.

As a side note: the math indicates that it is only counting banks robbed during normal hours(if you don't care about Saturday), but even if the '2400' claim was true the math is still kind of wrong:

That's only 3-4 minutes more, so it's not like they needed to fudge the numbers to sound cool, it's simply a mistake. If the people who made this claim felt checking whether they divided numbers three times correctly was too much work for the intro splash, I doubt they did proper research for the number of robberies.

30
Are there between 100,000-300,000 child sex slaves in the United States today?
9
Are 1 million people a year date raped?
31
How often are guns used by private citizens in self defense per year in the United States?
10
Are there 10 time more home invasions in the UK than the USA?
6
Does the US spend 10 billions per year to crack encryption algorithms?
32
In the USA, are there more African American men in prison than in college?
31
Are there 24 empty houses "available" per homeless person in the USA?
33
Does the death penalty in California cost more than $300m per execution?
29
Will 36,000 people die per year due to the repeal of the ACA?
83
Did Steve Mnuchin's OneWest Bank foreclose on a 90-year-old woman's house after a 27-cent payment error?