Does corporate lobbying provide benefits to those funding it?

This 2018 Bloomberg article claims that "Lobbying Doesn't Help Companies or Their Shareholders".

The numbers instead indicate that lobbying hurts the underlying capital values of the corporations. Lobbying doesn’t increase the chance that favored bills are passed by Congress, and it isn’t associated with the company receiving more government contracts.

It is based on a recent study.

I want to know if this claim is accurate - specifically if lobbying is successful in getting intended bills passed.

I'm looking specifically at the US perspective, as that is what the article is focused on.

Essentially, small and focused companies that have neither the operational complexity nor lack of executive oversight that is inherent in large firms not only have significantly smaller losses on average, but in some cases benefit from the lobbying.

Unfortunately, the paper is behind a paywall. Luckily, my old university credentials still work, so I was able to view the full paper. The paper performs statistical analysis which, even if I fully understood it, could not be adequately examined in a StackExchange answer. So, this answer will just focus on what data was used, and what conclusions were reached.

Data Examined: In the paper's own words:

We obtain lobbying data for the years 1998 to 2016 from the Center for Responsive Politics (CRP). CRP is a non-profit research group that operates out of Washington D.C. and analyzes the effects of lobbying on the legislative process. It maintains a publicly accessible database on lobbying expenditures and campaign contributions at OpenSecrets.org. We also obtain data from CRP on amounts spent by specific firms, lobbying spending on bills presented to the US congress, along with the success (or otherwise) of the bills.

So, they examined 18 years worth of publicly available data covering 2,186 firms which have a combined 18,075 years of lobbying effort. I don't know enough about econometrics to know for sure, but this seems like the paper has solid data backing to base conclusions on.

Conclusions: To reach their conclusions, they examined relationships between a large number of variables and performed various econometrics measurements, such as Arellano–Bond estimation, propensity score matched analysis, 2SLS (IV) estimation, and others which I do not have enough statistics degrees to understand but certainly seem thorough.

However, what I can understand are sections from the conclusion:

Lobbying refers to corporate practices designed to influence regulations and public policies... Research has documented high returns on this form of political investments in certain circumstances. Regardless of the outcome of firms' lobbying efforts, the lobbying process itself may also help firms stay informed of regulatory agenda and extend their political ties.

In short, research has shown that in certain circumstance lobbying results in large benefits for the lobbier, and allows corporations to know the details of upcoming regulations so they may prepare for them.

In contrast, other research finds that there are no returns or even negative returns to lobbying. These studies approach lobbying from an agency perspective and posit that managers engage in lobbying to support political causes that they are personally interested in, even though such activities may not benefit the firm and simply serve as another executive perk. Furthermore, inefficient managers may use lobbying to hide their ineptitude behind public subsidies.

In short, other research has shown certain lobbying is not in the company's best interest, rather it is just something the upper executives want to do personally.

Given the conflicting perspectives and inconclusive empirical results in previous research, we reexamine the relationship between lobbying and firm performance while using several rigorous techniques to explicitly control for endogeneity.

In short, this paper wanted to see which research was more correct, using a wide range of techniques.

Second, the finding of a significantly negative association between lobbying and firm performance supports the view that agency costs, through which managers engage in lobbying in order to support private political causes or to mask managerial ineptitude, outweigh strategic benefits of lobbying for an average firm. Our analysis further shows that the negative association may partly be explained by the limited tangible benefits lobbying efforts bring about. Specifically, the amount of lobbying expenses a firm incurs is neither significantly associated with the amount of government contracts awarded, nor with the ratio of bills passed (to the total number of bills lobbied by the firm).

The true overall results of this paper. After accounting for a variety of factors and performing a number of measurements on a large volume of data, the paper concludes that, on average, lobbying represents a net loss for a corporation, and that lobbying is "neither significantly associated with the amount of government contracts awarded, nor with the ratio of bills passed". Essentially, lobbying doesn't help the average company get the contracts or bills they lobby for. However, not all companies receive a net loss from their lobbying.

Addendum: a screenshot from the paper regarding the variables they examined: 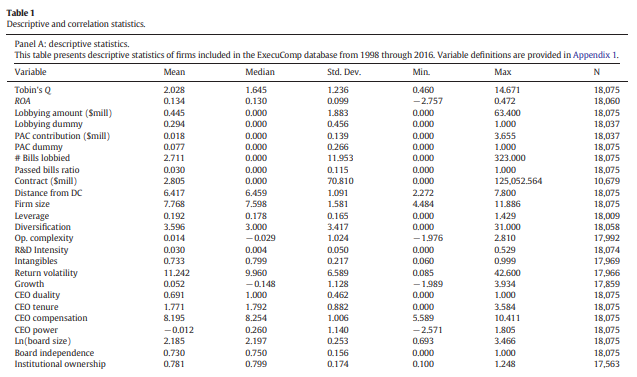 The Bloomberg Article mostly faithfully summarizes the main conclusions of this scientific article, The economics of corporate lobbying. This article concludes that in most cases, lobbying is correlated with poor company performance.

Correlation vs Causation and Bloomberg vs Economists

The Bloomberg headline (as well as many things in the body of the article) make statements of causality like "lobbying hurts the corporations." The scientific article avoids conclusively attributing causality. It says things like "the finding of a significantly negative association between lobbying and firm performance supports the view that agency costs ... outweigh strategic benefits of lobbying...." The economists remember that correlation is not causation. Evidence from the paper suggests that lobbying causes poor corporate performance, however it is still possible that poor corporate performance drives companies to lobby for a solution to their problems.

The science is conflicted

The article was written by real economists, and published in a peer reviewed economic journal. It should be taken seriously as a piece of cutting edge science, but science is messy and cutting edge science can be wrong. I only wholeheartedly believe a scientific theory, when the majority of a large body of research supports it. The introduction to this paper reviews the existing research on the topic, which has shown mixed results.

The paper uses a quote from another paper to explain why the evidence might be conflicting and messy.

The causal relationships between political activity and value likely run in both directions: politics may be one route for a troubled or stumbling firm to pursue to regain profitability, even as politics may distract senior managers and result in business investments that lack focus or are poorly fitted to a firm's core business strategy.

Real answer may be more complicated

Corporations and their lobbying efforts are complex and diverse. This paper concludes that the details of these companies make a difference in whether or not the lobbying is profitable, and the prior research seems to support this view. For example the results of this paper show that larger, more diverse companies tend to have a worse correlation with lobbying. Conversely high growth companies have a less bad (but still negative) correlation. Somehow this complexity didn't make it into the Bloomberg article.

When the real answer is complicated, and scientists don't know which variables are most important, the most important variables may be left out of the analyses. This can lead to conflicting results from different scientists. The paper spent a lot of time and energy controlling for these endogenous variables, but it is hard to tell if they did a good job.

Future science In the future, other economists will rexamine these results and find their own findings. Many of them will cite this paper, and you will be able to find those articles through this google scholar link. Maybe they will have a more clear and consistent take on the evidence.

Conclusion The findings of this article are supported by some previous scientific articles and opposed by others. Economists cant really agree about when and if lobbying is helpful or hurtful to a corporation.

5
Does the Australian Government provide more pension to refugees than the elderly?
15
Does the Veterans Health Administration (VHA) provide higher quality, cheaper care than most other US health systems?
10
Does pumping gas when the tank is half full and on the low flow setting provide an economic benefit?
14
Does US law leave walk-shoveling homeowners open to lawsuit more than those who don't shovel at all?
26
Does the Westboro Baptist Church get most of their funding from lawsuits?
22
Does the UK government have only 300 staff investigating tax evasion of £70bn+ vs 3250 staff investigating benefits (welfare) fraud of £1.2bn?
25
Does Planned Parenthood impose abortion quotas on its clinics and provide incentives to its workers to meet those quotas?
13
Does the UK provide 50% of EU's waters? And does this imply anything about fishing rights?
13
Does an American taxpayer fund $870 in corporate subsidies for every $36 in food stamps?