In Evidence that Food Proteins in Vaccines Cause the Development of Food Allergies and Its Implications for Vaccine Policy Vinu Arumugham claims:

Disclaimer: The allergic response is a very complicated medical topic that is still not well understood, and I am no medical professional, so I suggest that all readers follow up in a more medically adept venue. However, I am confident in at least the basic understand of this answer.

Yes, sensitization can occur without elicitation and in lesser allergen amounts than elicitation, but likely only in cases of repeated small dose exposures. 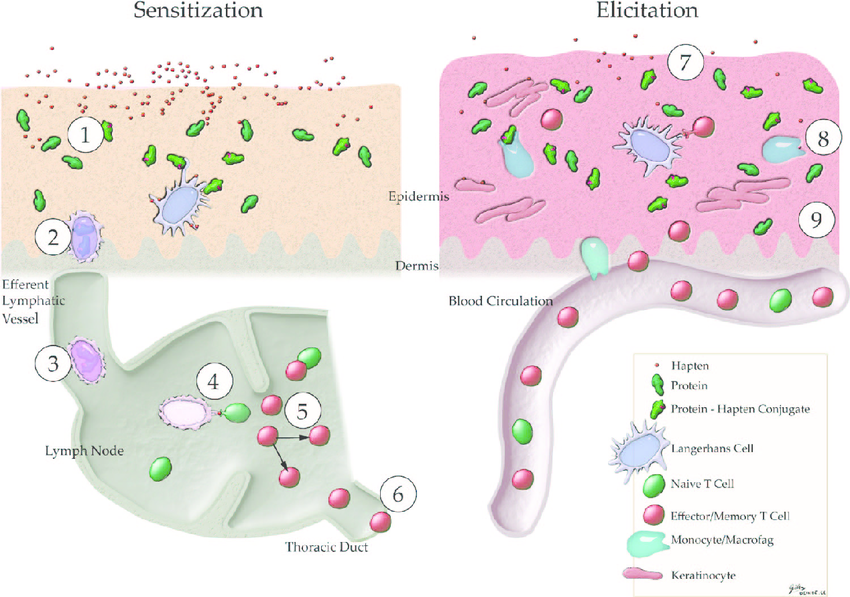 *adapted from Karlberg et al. (2008).
(1) Binding of haptens to proteins and other macromolecules. (2) Internalization of hapten-modified proteins. (3) Hapten-induced activation of LCs that migrate and process hapten–protein complexes. (4) Presentation of antigens by LCs to naive specific T-cells. (5) Proliferation of antigen specific T-cells; memory T-cells are formed. (6) Hapten-specific memory T-cells leave the lymph node and enter the circulation. (7) Re-exposure to the hapten. (8) Release of cytokines and chemokines attracting cells to the skin from the circulation. (9) Inflammatory response within 24–48 h, symptoms of ACD.

A slightly different nomenclature puts elicitation as a subset of sensitization, beginning with an induction phase followed by the elicitation phase: 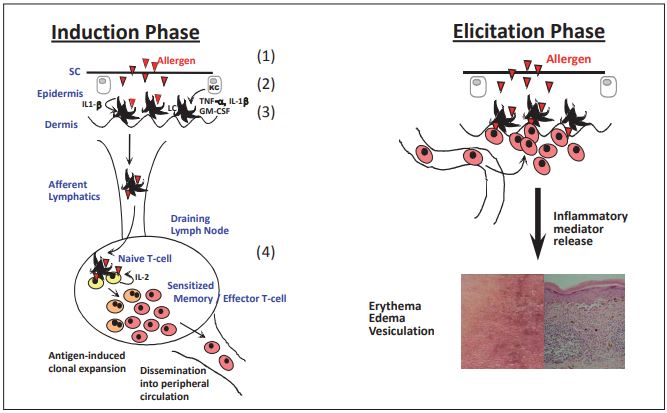 Illustration of skin sensitization mechanism.
Skin sensitisation can be described as a delayed-type hypersensitivity reaction induced by low molecular weight reactive chemicals (allergens). It comprises two phases, induction and elicitation. The chemical must penetrate the skin (1) to react with endogenous proteins, either directly or after activation through enzymatic or oxidative processes (2). Next, epidermal Langerhans cells (LC) and immature dendritic cells (DC) take up and process haptenated proteins (3). LC cells mature into antigen presenting cells, which after migration to the lymph nodes present haptenized protein fragments to T-cells (4). The activated T cells home to the skin where, upon repeated contact with the same allergen (elicitation phase), they elicit an inflammatory response that can lead to dermal injury.

It is important to note that for some chemicals, sensitization can occur after repeated exposure below the threshold dose. For formaldehyde donors, it was shown in mice that prolonged repeated exposure to an EC2 resulted in the induction of SI above 3. One of the characteristics of these chemicals is their reactivity towards proteins resulting in prolonged persistence in the skin (De Jong et al., 2007). In contrast, for the skin sensitizers DNCB, TMTD and benzocaine, prolonged exposure below the EC3 value did not result in positive, e.g. SI >3, lymph node responses (Van Och et al, 2003). Hence, due to physico-chemical characteristics of chemicals, thresholds for sensitization might be lower than the EC3 value.

Further, it seems that

You may notice a caveat. This ResearchGate study is almost exclusively about skin reactions, whereas the suspect claim regards possible allergens in vaccines. It's important to note that once sensitization occurs in one tissue, other tissues also react similarly, so it does seem theoretically possible for an allergen in a vaccine to cause sensitization and elicitation, especially in light of repeated exposures, considering a standard vaccine regimen includes multiple doses every year. For example:

In animal studies it has been demonstrated that elicitation reactions can be induced after inhalation exposure of animals that were sensitized topically to known skin and respiratory sensitizers (Arts et al., 1998; Van der Kleij et al., 2004).

Full allergic reactions to an ingredient in a vaccine are also not unknown, and in fact even accounted for in government compensation for injured individuals.

Yes, sensitization can occur in lesser amounts than elicitation, especially in cases of repeated small-dose exposures. Whether this can say anything helpful on the safety of possible allergens in vaccines is not entirely clear, mostly because our current understanding of allergy development is equally murky. General practitioner's advice is that patients who seem to be more prone to sensitization simply avoid possible allergens. In today's treatment environment where "gluten free" is as much a trendy diet as it is a real sensitivity issue, it is difficult for practitioners to give clear advice to patients. Complicated further by much of the misinformation and misguided fear of vaccines in general, I do not believe this particular topic helps us gain any insight on allergy or vaccines.

Not the answer you're looking for? Browse other questions tagged environmental-health vaccines allergies .

83
Are there vaccine ingredients which may not be disclosed ("hidden", "trade secret", or similar)?

11
Are organic mattresses healthier than the alternatives?
9
Does organic food have less heavy metal contamination than non-organic food?
8
Do air purifiers remove allergens?
7
Do UV furnace filters kill germs and reduce allergens?
2
Does aluminium hydroxide provoke allergies?
8
Do food proteins in vaccines cause the development of food allergies?
2
Is plastic significantly less likely to cause allergies than metal, paper, acrylic or bamboo
7
Do vaccines against childhood diseases leave the immune system less capable of fighting cancer?
7
Do the COVID-19 vaccine candidates risk inducing infertility in women?