Were George Washington's teeth ripped from the mouths of living slaves?

I've seen lots of things about George Washington's teeth like this going around. 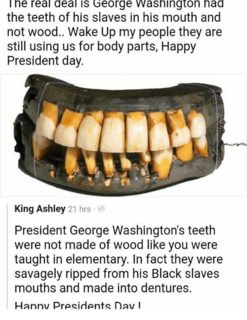 The real deal is George Washington had the teeth of his slaves in his mouth and not wood.. Wake Up my people they are still using us for body parts, Happy Presidents day.

President George Washington's teeth were not made of wood like you were taught in elementary. In fact they were savagely ripped from his Black slaves mouths and made into dentures. 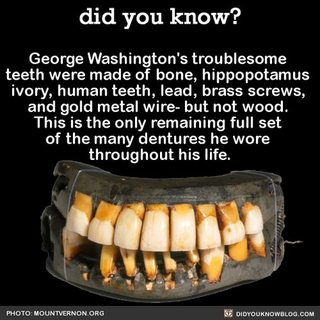 George Washington's troublesome teeth were made of bone, hippopotamus ivory, human teeth, lead, brass screws, and gold metal wire- but not wood. This is the only remaining full set of the many dentures he wore throughout his life.

The official website of Mount Vernon mentions in reference to another less interesting claim about wood,

[...] composed of a variety of materials—including ivory, gold, and lead—wood was never used in Washington's dentures

But it never explicitly mentions the teeth of his slaves.

We do know that (at least one of) his dentures used human teeth, as you can see in this picture of the exhibit (taken from Snopes), which says:

Contrary to popular myth, Washington’s false teeth were not made of wood but of human and cow teeth as well as elephant ivory.

In addition, the official website of Mount Vernon notes that:

Deep within one of Washington’s account books is an entry which details Washington’s purchase of 9 teeth from “Negroes” for 122 shillings. It’s not clear if Washington intended to use these teeth as implants or within a new set of dentures or if he employed the teeth at all. While this transaction might seem morbid to a modern audience, purchasing human teeth was a fairly common practice in the 18th century for affluent individuals.
The Trouble with Teeth

The website also notes that Washington saved a couple of his own teeth in the hopes that they could be used in his dentures.

So, there are a lot of unknowns. We don't know who these "Negroes" were who he bought teeth from; they could free or they could be slaves. According to this PBS article, Washington bought "foodstuffs" from both his own slaves and those of neighboring farms, so it's not a stretch to imagine him buying other things as well. We also don't know whose teeth were used in the dentures.

See also: this article, which gives references for where you can find the original sources, such as the ledger listing the purchase of teeth (see Credit entry #8).

Not the answer you're looking for? Browse other questions tagged dentistry slavery george-washington .

74
What's the point of brushing teeth in the morning?
5
Did George Washington support the sowing of Hemp?
5
Does baking soda remove stains from your teeth?
4
Is Barack Obama descended from slaves?
18
Were Irish prisoners shipped to America as slaves?
40
Were many former American slaves put back into virtual slavery after the civil war?
21
Were more whites slaves brought to North Africa than black slaves were brought to the United States?
10
Were slaves involved in the building of the Pyramids of Giza?
9
Were 80 million black slaves killed in the USA by the end of the civil war?