Do these pictures depict David Hogg after two separate crises?

A post circulating on social media - 48,000 shares and counting so far - depicts still images of two news reports, one in California in August 2017 and one in Florida in February 2018 after the Parkland school shooting.

The post alleges that both images depict the same man, David Hogg: 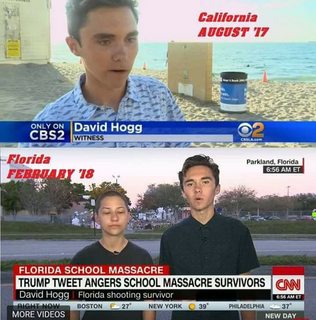 The allegation is that he is a "crisis actor", paid to pretend to be a witness/survivor of events that he was not actually present at, or that did not take place at all. I know there were similar allegations about the Sandy Hook shooting a couple of years back.

I don't think we can answer whether he's a crisis actor or not and I don't know what the event he "witnessed" in August 2017 is. Is it the same man in both of these images?

Both photos are legitimate and depict the same person (David Hogg), but the picture on top from August 2017 is from a story about Hogg and his friend getting in an argument with a beach lifeguard.

The picture on the bottom shows Hogg in a CNN interview pertaining to his experience in the Florida shooting.

While Hogg was involved in both events, most would not consider the incident in California a "crisis."

In Redondo Beach, Calif., Marjory Stoneman Douglas High School senior David Hogg and his friend Thomas decided to spend their summer afternoon at Topaz Jetty, a local beach buzzing with visitors. Their excursion took an unexpected turn, ultimately going viral, when Thomas, who was a frequent visitor to the beach, set his boogie board on a trash can to prevent it from getting sandy.

"I expected the outcome of my video to essentially be some reaction because I knew the lifeguard was being a bit of a jerk, but I never expected it to go that viral,” Hogg said. “By the time the news contacted me I was already kind of expecting it because the video had over 600,000 views.”.

It is no surprise that Hogg’s first instinct was to pull out his camera when faced with a potential threat. Through his reporting experience at WMSD-TV, the TV Production program at MSD, Hogg has proficient camera and editing skills — and they have clearly paid off as shown by the number of views on his video.

“I’m always living in the moment and trying to get the best shot that I can, and expose and record important things happening” said Hogg.

So yes it is the same David Hogg from Marjory Stoneman Douglas High School.

Hogg also discusses both incidents on his twitter: https://twitter.com/davidhogg111 (see August 2017 for the beach incident).

14
Do "crisis actors" exist to exaggerate or falsify an event?

30
Are these pictures of Osama Bin Laden with Obama, Rice and Hillary Clinton authentic?