The website, Cracked, recently posted an article which stated: 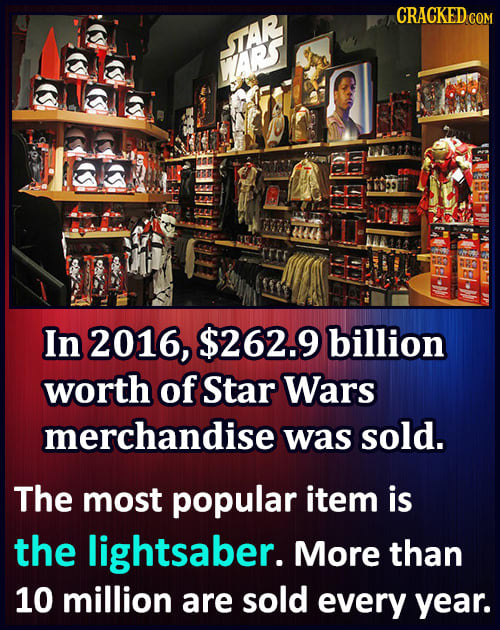 According to the 2016 GDP by country, if Star Wars was a country, it would be ranked 44th (or 43rd or 42nd depending on the source) by income - that doesn't seem right.

Nope, Cracked.com got it wrong.

They most likely based (some of) this claim on a Variety article:

Until I read the word "Overall" in Overall Licensed Merchandise, this article gave me the impression that they might be right.

I searched further and found the original LIMA article:

Retail Sales Up 4.4%; Entertainment and Corporate Trademarks Lead the Way

Entertainment/Character licensing remains the largest industry category, accounting for US$118.3 billion, or 45% of the total global licensing market. Corporate/Brand Trademarks was the next biggest property type, generating US$54.6 billion in retail receipts for 20.8% of total revenues, followed by Fashion, with US$31.1 billion (11.8% of the total), and Sports at US$25.3 billion (9.6%)...

They don't even mention the Star Wars franchise in their article.

So the total global sales of licensed goods and services was US$262.9 billion (according to one study) and Star Wars played a role in the 4,4% growth according to Variety.

Spot the difference between these two articles:

In addition to Jordys excellent answer, you can also easily deduce from the picture alone that the number is not plausible.

Checking the Disney Shop, the standard retail price of a lightsaber is $30.

According to the picture lightsabers are the most popular item with more than 10 million sold. Assuming a final number between 10 and 12 million puts the total sales of lightsabers somewhere between $300 and $360 million.

This would mean, that most popular item in your line-up amounts to barely more than 0.1% of total sales value. Which is very unrealistic.

Furthermore, the most expensive items in the shop are a TIE-Fighter shaped pen as well as an X-Wing one sold at $2620. Even assuming, those sell less than lightsabers but each also 10 million and disregarding the fact those are limited editions of 2000 each. They would only produce $52 billion of revenue.

The most expensive non-limited item I can find are several watches priced at $400. So, $4 billion revenue each for 10 million sales.

This means, the majority of items in the store need to be nearly as popular as lightsabers to even get close to the $262.9 billion figure.

9
Is Congressional net worth up nearly 3700% since 2004?
10
Are Apple products sold at a premium price?
28
Was pepper once worth its weight in gold?
123
Did Germany produce so much renewable electricity on May 8th 2016 that their power prices went negative?
3
Did US Consumer Confidence Index rise up to the highest level in more than 15 years in December 2016?
48
Is the presidential family net worth growth/loss portrayed in this infographic true?
27
Is there a wealth gap in Boston where the median net worth of white households is $247,500 while the median net worth for black families was $8?
26
Would the median household income in the USA be $140K and mean net worth $800K if wealth were evenly distributed