Does anybody spend 6 hours each day just to get water?

During the 2018 Super Bowl there was a commercial advertising a campaign to help bring fresh water to people in developing countries. It argued that fresh water is grossly easy to attain in developed countries yet

millions of people in the developing world spend up to 6 hours every day just collecting the water they need to survive.
Source

Outside of rare and unusual circumstances (such as war or disease outbreak) I have a hard time believing large amounts of people live so far away from the only clean water source. They would naturally move closer, as all species follow the resources they need.

Are there any populations that spend much of the day just to collect water? A single village? If yes, what prevents them from moving closer to the water and how long has it been this way?

How Long Does It Take to Get Water? For Aysha, Eight Hours a Day
Worldwide, women and girls spend an estimated 200 million hours — every day — collecting water. It’s a colossal waste of their valuable time.

Thirteen-year-old Aysha, in Afar, Ethiopia, must trudge eight hours, round trip, to collect water for herself and her family.

In the rural areas of Ethiopia, woman and children walk up to six hours to collect water.

But how many are without access to a stable water supply?

In some countries, large numbers of people report using water delivered by tanker trucks or small carts with drums as their main source of drinking water. 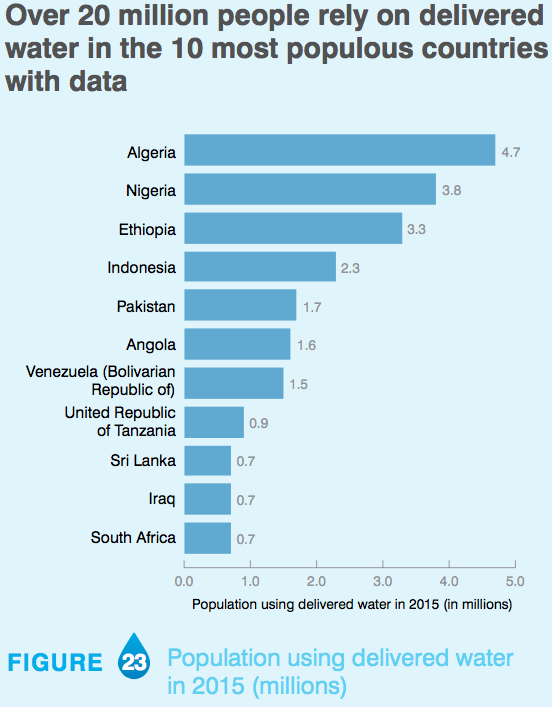 According to this report

The situation is getting worse for many of these people. Reasons are increased droughts, failing states, increased urbanisation without infrastructure keeping pace.
In the case of the girl from the first example it is clear that she has to take the burden of walking to get the water for her whole family.

Women still carry most of the world’s water

And in many places, water sources are far from homes. In Asia and Africa, women walk an average of 6 kilometers (3.7 miles) per day collecting water.

Most of data above is from world organizations and activists that have "an axe to grind" in promoting their goal to increase water access for structurally and environmentally disadvantaged people. Some may mistrust those organizations in principle. At the expense of prolonging your reading time, several other issues around this seem to be in need of being addressed, as evidenced by the comments. Scientific papers on this topic above:

The Emerging Global Water Crisis: Managing Scarcity and Conflict Between Water Users (2007):
As of today, some 1.1 billion planetary inhabitants do not have access to clean drinking water, and 2.6 billion do not have sanitation services. Water pollution is a leading cause of death worldwide, and transmits or supports numerous debilitating diseases to populations forced to drink contaminated water. Agriculture is by far the leading user of freshwater worldwide, accounting for almost 85% of global consumption.

Global minute: water and health – walking for water and water wars (2007):
Walking for water For many people around the globe walking for water does not mean walking to the nearest water fountain in the office. Many countries suffer from lack of access to water for daily use. Water is not delivered through water pipes to homes; people have to walk distances in search of water for daily needs. How far you have to walk to fetch a pot of drinking water depends on where you live—Asia or Africa. To get drinking water, the walking distances vary from 2 to 6 km. It is a daily chore for villages in India and Africa.

Who walks the walk? Not the able bodied men of the family, but the women and children, who have the onerous responsibility of fetching the water, cooking and feeding the family. Women carry loads of 20 kg on their head and walk 1 to 2.5 h daily 300 days a year in Burkina Faso. In Nepal, women work 16 h a day and go to work walking long distances. In Uganda in a study of 715 water journeys, 75% were on foot, 22% by bicycle and only 2% by vehicle. In Mozambique, communal water standpipes reduced the collecting time to 25 min compared to 131 min in another village without water standpipes.5 Thus, there is a great need to improve access to clean water to sustain life. Water also plays a significant role in maintaining good health.

Safe access to safe water in low income countries: Water fetching in current times (2011):
Road casualties are an important risk. Transportation infrastructure is poor in developing countries, especially in rural areas. Water fetching often involves walking on poorly designed and chaotic roadways (often the only place to walk), and pedestrians share the roadways with vehicles and cyclists. Injuries and death can result: over 90% of the world’s roadway fatalities occur in low- and middle-income countries, and a substantial portion are pedestrians and other vulnerable road users (World Health Organization, 2009).
Assault and attack risks are not well documented. Women walking some distance alone or in small groups can be targets of attacks by humans and wild animals. For example, almost all rape victims in Eastern Congo described being attacked when fetching water or wood or doing laundry away from the household (Kircher, 2007). In addition, women sometimes face abusive treatment when they need to fetch water from private wells on the land of wealthier farmers (Shah, 2002).
Time spent may be a better indicator of the burden of fetching water in some locales. In densely populated areas, improved water sources might be nearby but waiting in line can take an hour or more (Ray, 2007). Women’s workload in agricultural societies often exceeds that of men (Mpetsheni, 2001), and collecting water and heating fuel are two of the most time-consuming activities. Moreover, women spend more time on household work when the water infrastructure is inadequate.
The number of trips, which varies during and across seasons, is needed to calculate time and caloric expenditures. One ergonomic study in Haryana, India found that women fetched and carried on the head, on average, 23 vessels of water each day during the summer (17 in the morning and 6 in the evening) (Bimla et al., 2003). The weight of the vessel and the drudgery of water carrying, which can be considerable particularly with multiple trips, also merit investigation.

Note that a one way trip to a water source is on average:

Although the distances to clean water are on average just a third of African distances the time spent per household for hauling water in India is quite impressive:

The drudgery involved is more conspicuous in terms of time spent by the households towards transporting water manually. All the households, without exception, spend time on fetching water. On an average, households spend about 18 hours per day (more than two person days) to haul water, ranging from 15 hours in Anganwa and Lolawas to 22 hours in Bhacharna. In Anganwa, a large part of the time taken is spent waiting in queues near stand posts. If these indirect costs are converted into direct costs in terms of opportunity costs (wages), the value of water would work out to be quite high, as the minimum wage rate prevailing in these villages is Rs. 25 per day.
(From V. Ratna Reddy. "Quenching the Thirst: The Cost of Water in Fragile Environments", 1999)

Not the answer you're looking for? Browse other questions tagged water poverty .

28
Does dowsing (aka Water Divining) work?
51
Do people need to drink 8 glasses of water a day?
236
Does hot water freeze faster than cold water?
4
Does "hard water" cause eczema?
5
Does a full grown oak tree expel 7 tons of water from its leaves in a day?
9
Does nearly half the world's population live on less than $2 a day?
11
Does cold water boil faster than hot water?
3
Does atmospheric water contain minerals?
11
Does a vortex vessel affect water in these specific ways?