Similar claims can be found in these sources, among others:

Even though the article was published by Bild (which is a strong indicator that you have to check the sources yourself) and has no verifiable source, it sounds correct.

In 2009, Sandra Kuhn wrote a dissertation in medicine at the University of Hamburg about "Auto-erotic deaths in Hamburg and Munich 1983-2002" [1]

This publication is most likely the source for the articles as EveningStandard as well as Dailymail refer to the 1983-2003 timeframe.

If you take a high dark figure into account (e.g. relatives removing embarrassing evidence) the given figure of 100 is acceptable.

Possibly. We cannot be sure. There are no official statistics about that.

The origin of this claim is German tabloid Bild:

It is only an estimate made by a forensic expert Harald Voß that 1–2 deaths per million inhabitants are due to autoerotic mishaps, most commonly by asphyxiation (hypoxyphilia). A personal estimate uttered in an interview, there is no "new study" on this, as many new outlets regurgitating this story claim.

Every unnatural death in Germany is examined and the results are collected in encoded form by the Federal Statistical Office of Germany. They are then published on pages like these:

As you can see, for specific causes of death there are usually very precise statistics. In the example above falls caused 12867 deaths a year and suicides 10078. The code in the front row of this table is ICD-10. That is one major problem for the claim in question.

Autoerotic asphyxia (hypoxyphilia) is a paraphilia and subcategory of sexual masochism characterized by self-strangulation up to the point of loss of consciousness to enhance sexual arousal. This paraphilia is not common enough to be included as a separate paraphilia within the latest editions of the […] International Statistical Classification of Diseases and Related Health Problems (ICD-10). Therefore, it is coded as paraphilia (deviatio sexualis) not otherwise specified. However, it is an accidental lethal sexual practice in which hypoxia (reduced oxygen supply to tissue, in this case brain), is used to enhance orgasm by strangulation, hanging, suffocation/ exclusion of oxygen with plastic bags.
Mahesh Chand Meena & Saloni Chadha: "Accidental Death Due to Autoerotic Asphyxia Coupled With Fetishistic Transvestism." International Journal of Medical Toxicology & Forensic Medicine. 2017; 7(3):189-193.

It was proposed in 1991: Autoerotic death. A definition. But didn't make it into the official coding system. When a death might have been caused by autoerotic practices then often those relatives finding the body are quite ashamed of the situation and clean up before officials arrive. So somewhere in the categories of unnatural deaths, most probably called accidents, suicides, are many of these cases hidden.

A nice overview of the problems related to classifying them is in Accidental Autoerotic Death:

As many cases of autoerotic deaths show combined aspects of masochism, transvestism, or transvestic fetishism, which disclose different degrees of sexual identification that are fundamental in reaching orgasm, the correct grading of AADs is difficult in both classifications, DSM–IV and ICD–10 (3,34). For these combined paraphilic cases, the term “multiplex paraphilias” was suggested (28, 35).

and with numbers to confirmed accidental autoerotic deaths:

Forensic aspects of 40 accidental autoerotic deaths in Northern Germany. (2005):
Between 1983 and 2003, 40 accidental autoerotic fatalities have been investigated. in the Institute of Legal Medicine in Hamburg. Only 50% (n=20) were autopsied (13 legal autopsies, 6 for scientific purposes and 1 for an insurance company). All the victims were males, aged between 13 and 79 years (among them five children and adolescents, the deceased mainly between 20 and 40 years). The paraphiliacs utilized a great range of devices and props as fetishism, sexual aids or pain-stimulating agents, like intimate feminine garments, ropes, chains, bondages, locks, pornographic magazines, condoms, rubber items, and chemical anaesthetics. The cause of death was strangulation in 20 cases (17 x hanging, 3 x ligature strangulation), 11 x suffocation (8 x under plastic bags, 3 x with face-masks, 2 x thoracic compression, 1 x positional asphyxia, and 1 x cocaine intoxication). Five cases without autopsy remained unclear because of missing morphological and toxicological findings; it could not be differentiated between asphyxiation/intoxication/natural disease, although the scene characteristics seemed to be typical for autoerotic deaths. It is emphasized that the findings at the scene, the morphological and toxicological examination of the dead body (full autopsy as prerequisite) by experienced investigators and the personal history of the deceased have to be evaluated very carefully and intensely to reconstruct the accidental fatal autoerotic course accurately and undoubtedly (to exclude the possibility of sexual homicide, neglected killing, or suicide).

To put this into a better perspective you might need some visuals: 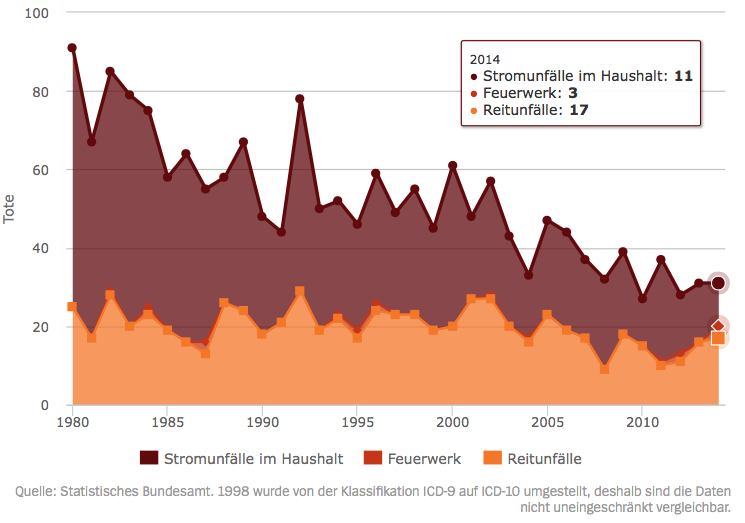 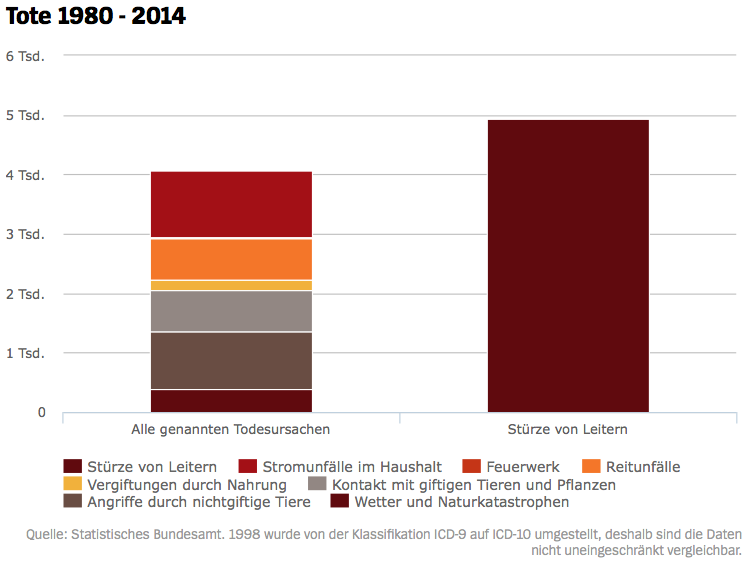 Showing that falls from ladders are quite deadly.

Sandra Kuhn estimates in her 2009 dissertation "Autoerotische Todesfälle in Hamburg und München 1983-2002" that 0,6–1 cases per year and per million inhabitants might be a reasonable number.

The new number given by Voß is significantly higher, but still only an estimate. Possible reasons explaining this discrepancy seem absent from this interview with him.

The prevalence of auto-erotic fatalities is difficult to calculate, since a coroner often records a verdict of accident or misadventure. It is under these labels that many auto-erotic deaths lie hidden. Sometimes, however, where uncertainty exists over whether the person intended suicide, the verdict is left open. Bereaved families usually prefer this.

The book Criminal Profiling: An Introduction to Behavioral Evidence Analysis estimates the rate of deaths:

The DSM-IV-TR summarizing data from the United States England, Australia and Canada, offers a range of "one to two hypoxophilia-caused deaths per million population are reported each year." Various authors report autoerotic asphyxial death mortality figures from an apparent low of 250 deaths per year to a higher, yet "conservative," estimate of 5,00 to 1,000 deaths annually."

It includes references and goes on to explain why it is difficult to estimate the rates of death and also the risks involved.

16
In Pre-WWII peacetime Germany, were there about 18,000-20,000 suicides per year?
3
How many pedestrians die a year in NYC from being hit by a car?
10
Does a child die from malaria every two minutes?
27
Did Germans receive corn instead of wheat and rye after WW2 due to a translation error?
1
Do about 10 people die from unintentional drowning daily?
3
Did hundreds of thousands of people die due to lack of seat belts in the period before they were made mandatory?