Has anyone ever attempted to give a cake—or other baked good—with a file or saw in it to someone in prison to help them escape?

One common trope in fiction over the decades has been someone putting a file in a cake—or other baked good—that then is passed onto someone in prison to help them escape. As the website TV Tropes explains:

The stereotypical way to smuggle escape tools into a prison is by hiding them in a cake and giving them to the prisoner. Most often a nail file is hidden in the cake.

Granted, most of the time I have seen this trope played out it was with a larger “rasp” file. But that minor quibble in TV Tropes wording aside, has this ever actually happened in the real world in the history of people being imprisoned? Looking for an early example of this happening if possible. Source can be pretty much anything as long as it is valid, verifiable and legitimate.

Illustrative picture below of a literal file baked into the middle of a cake. 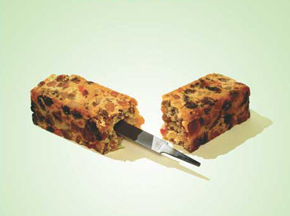 There have, and there's a very nice comprehensive article at Smithsonian.com detailing literal files in cakes and other escape tools:

The earliest case I found was recorded in an 1804 compendium of criminal behavior—and it’s an instance of successful use of cake as a means of securing freedom, albeit in a backhanded way. William Blewitt was a gang member known for his pickpocketing prowess and tendencies toward housebreaking. Sentenced to seven years for an undisclosed offense, Blewitt was placed aboard a prison ship where he learned that several felons procured saws and files by way of gingerbread cakes and were planning to escape before the ship set sail. Blewitt alerted the authorities to the plot and was pardoned.

This specific story also appears in

The Criminal Recorder: Or, Biographical Sketches of Notorious Public Characters, Including Murderers, Traitors, Pirates, Mutineers, Incendiaries ... and Other Noted Persons who Have Suffered the Sentence of the Law for Criminal Offenses ; Embracing a Variety of Curious and Singular Cases, Anecdotes, &c, Volume 1, available online here:

William Blewitt, another of his gang, was the son of poor parents near Cripplegate, who apprenticed him to a glover; but before he had served above three years of his time, he associated with ill company, and became a pickpocket and house-breaker. Having been apprehended and lodged in Newgate, he was tried for an offence, of which he was convicted, and sentenced to be transported for seven years; in consequence of which he was put on board a ship in the river, in company with several other felons, Some of these had procured saws and files to be concealed in cakes of gingerbread, and by means of these instruments they hoped to effect their escape before the ship sailed to any distance. Blewitt having discovered their intention, disclosed it to the captain of the vessel, who seized the implements, and gave Blewitt his liberty, as a reward for the information.

Giacomo Casanova, the famous 18th Century adventurer, made use of a metal spike hidden in a plate of pasta as part of his 1757 escape from the Doge's palace in Venice.

Overcoming his inertia, Casanova set upon another escape plan. He solicited the help of the prisoner in the adjacent cell, Father Balbi, a renegade priest. The spike, carried to the new cell inside the armchair, was passed to the priest in a folio Bible carried under a heaping plate of pasta by the hoodwinked jailer. The priest made a hole in his ceiling, climbed across and made a hole in the ceiling of Casanova's cell [...]

Casanova's autobiography contains the entire story in great detail, and is a very interesting (and more than slightly racy) read.

Not the answer you're looking for? Browse other questions tagged prisoner .