Is the Airtel music ad the most streamed song and most downloaded ringtone?

This image was forwarded to me on Whatsapp 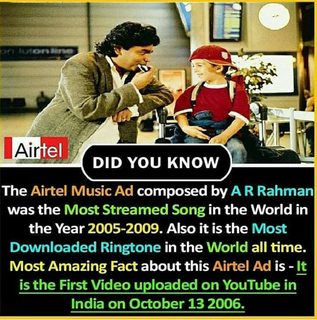 The Airtel Music Ad composed by A R Rahman was the Most Streamed Song in the World in the Year 2005-2009. Also it is the Most Downloaded Ringtone in the World all time. Most Amazing Fact about this Airtel Ad is - It is the First Video uploaded on YouTube in India on October 13 2006.

31
Does music affect the growth of plants?
12
Backwards masking in music
14
Can music incite murder?
6
Is classical music good for a pregnant woman and her baby
41
Is the increasing availability of high speed internet pornography reducing sex crime rates?
14
Did a radio DJ lock himself in the studio and play the same song on repeat?
9
Were Buddhists murdered en masse during the first Muslim conquest of India?
5
Did the vedas accurately describe the planetary system like elliptical orbits and Sun being the centre?