Does more than one unit of alcohol a day damage your long term brain function and increase the risk of dementia?

In a recent article in the The Times bemoaning modern dietary guidelines the author reports new evidence on the affects of alcohol on the brain (my highlights):

To add to the agony, it coincides with research showing that the UK’s alcohol rules are too lax, with even drinking one pint or glass of wine a day poisoning the brain and raising the risk of dementia.

...The study, in the Journal of Public Health, said: “Consuming more than one UK standard unit of alcohol per day is detrimental to cognitive performance and [this] is more pronounced in older populations.”

The less cerebral newspaper The Sun reports the same study like this:

The study of more than 13,000 boozers, led by Oxford academics, published in the Journal of Public Health last week warned that tiny tipples could result in long-term health problems.

It claimed drinking more than one unit a day "may have an adverse cognitive impact" and said UK Department of Health guidance "should be sensitive to this".

The topic of recommended levels of alcohol consumption and their evidence base is interestingly controversial (see this question and this question for previous analysis on this site.

Does this new study add something new to this controversy? Is the evidence presented credible? Should we limit our alcohol consumption to 1 unit a day to protect us from declining brain function?

The newspaper headlines exaggerate the paper's conclusions, but they, in turn, are not justified by the data shown

The paper itself does not make any attempt to measure the occurrence of specific dementias but uses a standard test for cognitive performance to measure its outcomes:

The current study examined the shape of the association between alcohol consumption and change in cognitive performance.

So we could argue that the newspapers have distorted what the paper said by claiming a link between alcohol and dementia. But the initial discussion muddies the waters by starting like this:

The neurodegenerative effects of excessive alcohol consumption are well documented. Alzheimer’s disease and dementia have replaced ischaemic heart disease as the leading cause of death in England and Wales, and death rates for neurological disease are increasing worldwide.

Hence creating a link in readers' minds even though they also acknowledge in their introduction:

...light to moderate alcohol consumption is a positive predictor of health status in older adults, protects cognition and may reduce the risk of dementia in later life...

The paper then justifies its work by claiming that protective effect of alcohol is controversial. So they have piqued media interest by mentioning a big modern fear, dementia, though they are not really studying it. Good for getting attention, bad for clarity of communication.

The specific conclusions of the study were:

UK department of Health guidelines are that drinkers should not consume more than 16 g/day to minimize the risk of alcohol to health. Our findings suggest that to preserve cognitive performance 10 g/day is a more appropriate upper limit. This would translate into not more than one UK standard unit of alcohol each day.

But as David Speigelhalter points out:

Just a quick look at the academic paper’s Figure 1 (reproduced below) suggests the authors’ conclusions are bizarre, to say the least. 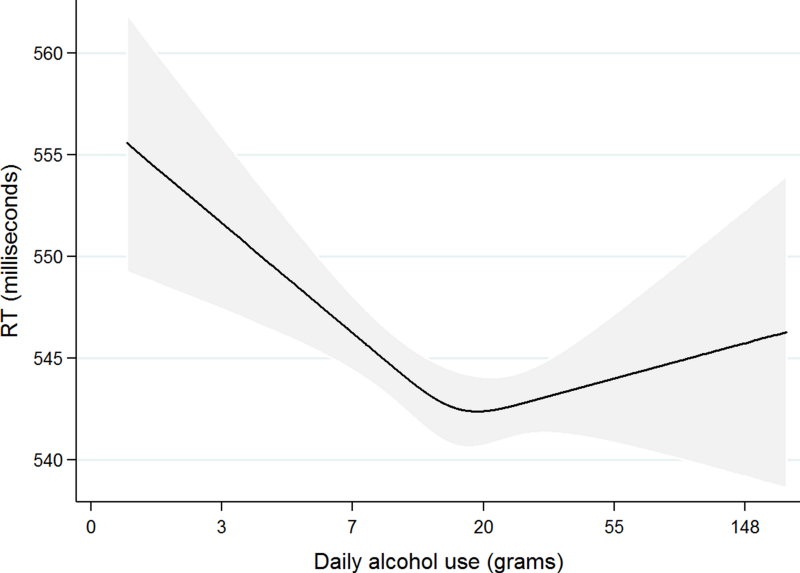 The response times improve rather dramatically with increasing alcohol consumption, down to a minimum when daily alcohol consumption is around 16g, which is exactly the two units a day under current guidelines. Then there is a (rather gentle) slowing in reaction times for increasing consumption up to very heavy drinking. The confidence intervals are very wide, but the estimated response time at two units a day is clearly estimated to be lower than at one unit a day, so if anything the study supports the current guidelines.

So the conclusions that one unit a day is preferable to two units do not seem in the least justified by the fitted model, and may have arisen from a misinterpretation of the curve-fitting technique [which produces kinks in the fitted curve that are not in the original data]. ...

And in fact a more suitable headline might be: drinking up to current guidelines linked to improved cognitive performance.

The paper seems rather over-eager to demolish the well-known J-shaped curve between alcohol consumption and health (see this previous skeptics.SE answer). But in doing so ignores problems with its own evidence. error bars are wide and potential confounders are problematic (not least the issue about the reliability of recall as a way of measuring actual alcohol consumption).

The actual data (as opposed the the conclusions given in the article summary) suggest that drinking moderately substantially improves cognitive performance and that this benefit only declines slowly with much larger alcohol intake.

I don't think the headlines this story created were caused by poor journalism (for a change). The paper itself courts confusion and, more importantly, makes claims even its own data do not justify.

The Sun article refers to this study, which concludes:

The relationship between alcohol use and cognitive function is non-linear. Consuming more than one UK standard unit of alcohol per day is detrimental to cognitive performance and is more pronounced in older populations.

Curiously, however, the study showed a J shaped relationship between cognitive performance and alcohol use, such that while very heavy drinkers were not as sharp as non-drinkers or very light drinkers, they were sharper than moderate drinkers. Here is the graph.

However, like a lot of health and nutrition studies, this is an observational cohort study, which suffer from numerous flaws.

The authors also note the following:

The ‘J’ shaped association reported here should be considered critically. To reduce the ‘sick quitter’ effect abstainers were omitted. However, participants who may have only reduced alcohol intake for health reasons rather than quit, remain in the analysis. Selection bias may also be operating at high levels of alcohol consumption in that ‘bright boozers’, those with high alcohol intake and high cognitive performance, may be over represented at recruitment and follow-up, thus deflating estimates of harm at high levels of consumption. The extent to which this effect is ameliorated by heavy drinkers disproportionately under reporting consumption levels is also unknown. The effect of these selection and reporting biases is likely to be complex, but unlikely to materially affect the conclusion that alcohol consumption deleteriously affects cognitive performance at lower intake levels than previously thought.

Not the answer you're looking for? Browse other questions tagged alcohol public-health epidemiology .

108
Is alcohol beneficial in small amounts?
21
Recommended alcohol drinking quantity: are they just making it up?
6
Are the 2016 UK guidelines on alcohol consumption evidence based?

108
Is alcohol beneficial in small amounts?
6
Does the alcohol content of drinks make you fat?
13
Does drinking recommended amounts of alcohol do more harm to children aged 13 to 18 than it does to adults?
17
Do societies that are less abstemious have more sensible drinking patterns?
6
Are the 2016 UK guidelines on alcohol consumption evidence based?
7
Does drinking alcohol improve foreign language skills?
8
Have the UK official alcohol limits been reduced to a quarter of the levels recommended in 1979?