Is this a photo of a rough sleeper who froze to death? 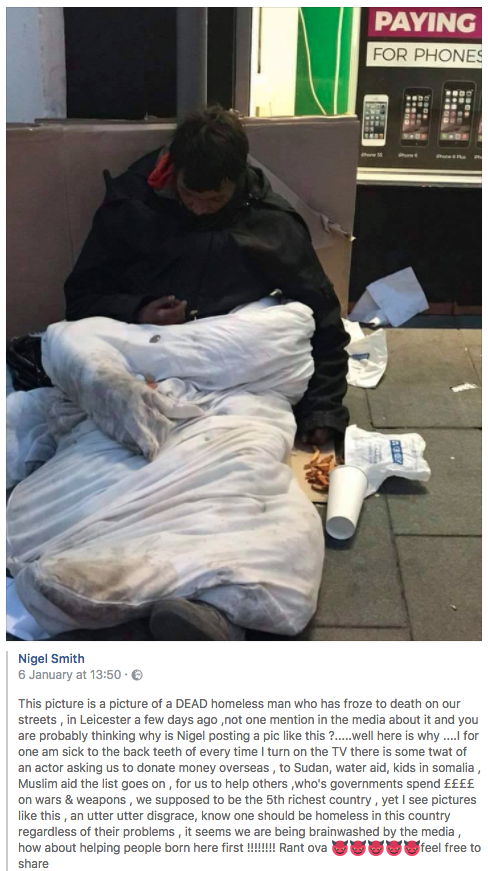 This picture is a picture of a DEAD homeless man who has froze to death on our streets , in Leicester a few days ago ,not one mention in the media about it and you are probably thinking why is Nigel posting a pic like this ?.....well here is why ....I for one am sick to the back teeth of every time I turn on the TV there is some twat of an actor asking us to donate money overseas , to Sudan, water aid, kids in somalia , Muslim aid the list goes on , for us to help others ,who's governments spend ££££ on wars & weapons , we supposed to be the 5th richest country , yet I see pictures like this , an utter utter disgrace, know one should be homeless in this country regardless of their problems , it seems we are being brainwashed by the media , how about helping people born here first !!!!!!!! Rant ova 😈😈😈😈😈feel free to share

The Metro has an article about a homeless man found dead due to the cold, but it talks about Birmingham, not Leicester.

Has this been debunked or confirmed anywhere?

The guy is a rough sleeper but he was not dead in that photo.

Leicester City Council which is responsible for preventing rough sleeping in the city has had its outreach teams investigate the apparent death.

It says no rough sleepers have died on the streets recently.

A council spokesman said: “We are aware of this post.

“This has been investigated and there is no truth in the claim.”

The council said it has contacted a number of groups that shared the post in good faith to explain it was fake and many of them as a result removed the post from their feeds.

The Mercury understands the man in the picture is genuinely a rough sleeper who has been begging in the city centre but that he is not dead.

Arif Voraji, of Help the Homeless Leicester, said: "It's fake.

“A guy with right wing views then shared it and that got it spread round even more - though a lot of people did challenge him and a lot of the posts got taken down.

“The guy in the picture is 100 per cent homeless. We know him.

“He’s not dead though. We’ve seen him about.

“It just goes to show how easy it is for false stuff to be shared on social media and why you have to be careful with it.”

Not the answer you're looking for? Browse other questions tagged united-kingdom photography .