A recent Handelsblatt Global Edition article, How electric cars will charge Germany's job market, talks about changes in the job market due to the introduction of electric cars.

One of the first points it makes is about electric car production requires less of a workforce than production of combustion engine cars. Concretely, the article says:

While an electric car consists of some 200 parts, there are more than 1,000 parts in gasoline or diesel vehicles.

Is there really an inherent difference in "part count" of that order of magnitude between gasoline/diesel cars and electrical cars?

I would have expected that any such difference is caused by changes that happen to coincide with the switch to developing electric vehicles, such as new production techniques and designs (enabling more complex single-piece structures instead of assemblies) or increased outsourcing (such that more ready-made assemblies of "sub-parts" are bought from suppliers and treated as "one part" once they arrive at the actual car manufacturing plant).

EDIT: As is noted in several of the comments, a clearer definition of what constitutes a "part" is required to make answers comparable. Going by the context of the article, it seems that whenever two pieces enter the production process in a separate way such that they need to be assembled at some point during the production process, these two pieces must be considered "two parts".

With this said, the question whether the cited statement holds true only when excluding the assembly of components that the car manufacturer buys pre-assembled from suppliers is very valid. The article appears to insinuate that there is no such restriction to the statement (as it derives conclusions about the overall required workforce in car production), but answers may well come to the conclusion that the restriction is necessary for the claim to hold (or maybe not even then).

Yes, electric cars are much simpler.

Electric motors are much simpler too. No crank or cam shafts, no pistons, no flywheel. Here is how AutoWeek puts it:

Compared with a typical four-cylinder internal combustion engine, which has hundreds of moving parts, the electric motor is very simple. Motors have a rotor, stator, armature, commutator, windings and bearings.

Electric motors deliver very high torque so no need for transmissions. From the Road&Track article:

Electric motors have a much larger RPM range than the typical internal combustion engine. And unlike a gas or diesel engine, an electric motor makes its best power output over an incredibly broad RPM range. So instead of packing the car with numerous gears to keep the engine in its happy zone, designers of electric cars just pick a gear ratio that provides a good compromise between acceleration and top speed. And with the typical electric motor capable of sustaining 20,000 RPM, the top speed often isn't even a limiting factor.

Electric cars also don't have differentials or a drive shaft. Instead, each wheel that's powered gets its own motor and torque is controlled by electronics. That's called "electronic differential".

Here is how Wikipedia describes them:

The classical automobile drivetrain is composed by a single motor providing torque to one or more driving wheels. The most common solution is to use a mechanical device to distribute torque to the wheels. This mechanical differential allows different wheel speeds when cornering. With the emergence of electric vehicles new drive train configurations are possible. Multi-drive systems become easy to implement due to the large power density of electric motors. These systems, usually with one motor per driving wheel, need an additional top level controller which performs the same task as a mechanical differential.

The claim vastly depends on what you consider parts... and even on the model of car in question. Given that Tesla S used AA-sized cells for its battery pack... how many of those did it take to power the car? (I bet more than 200.)

Straubel pointed to the wide variety of lithium-ion battery cells—the parts of a battery pack that actually store energy—that the company is testing. This included a row of small cylindrical cells about the size of AA batteries—the kind Tesla uses in the Model S.

By choosing smaller, cylindrical cells, Tesla saved on manufacturing costs—their costs have been driven down by economies of scale for the laptop industry, for which the cells were developed.

Count them in this photo if you want (source): 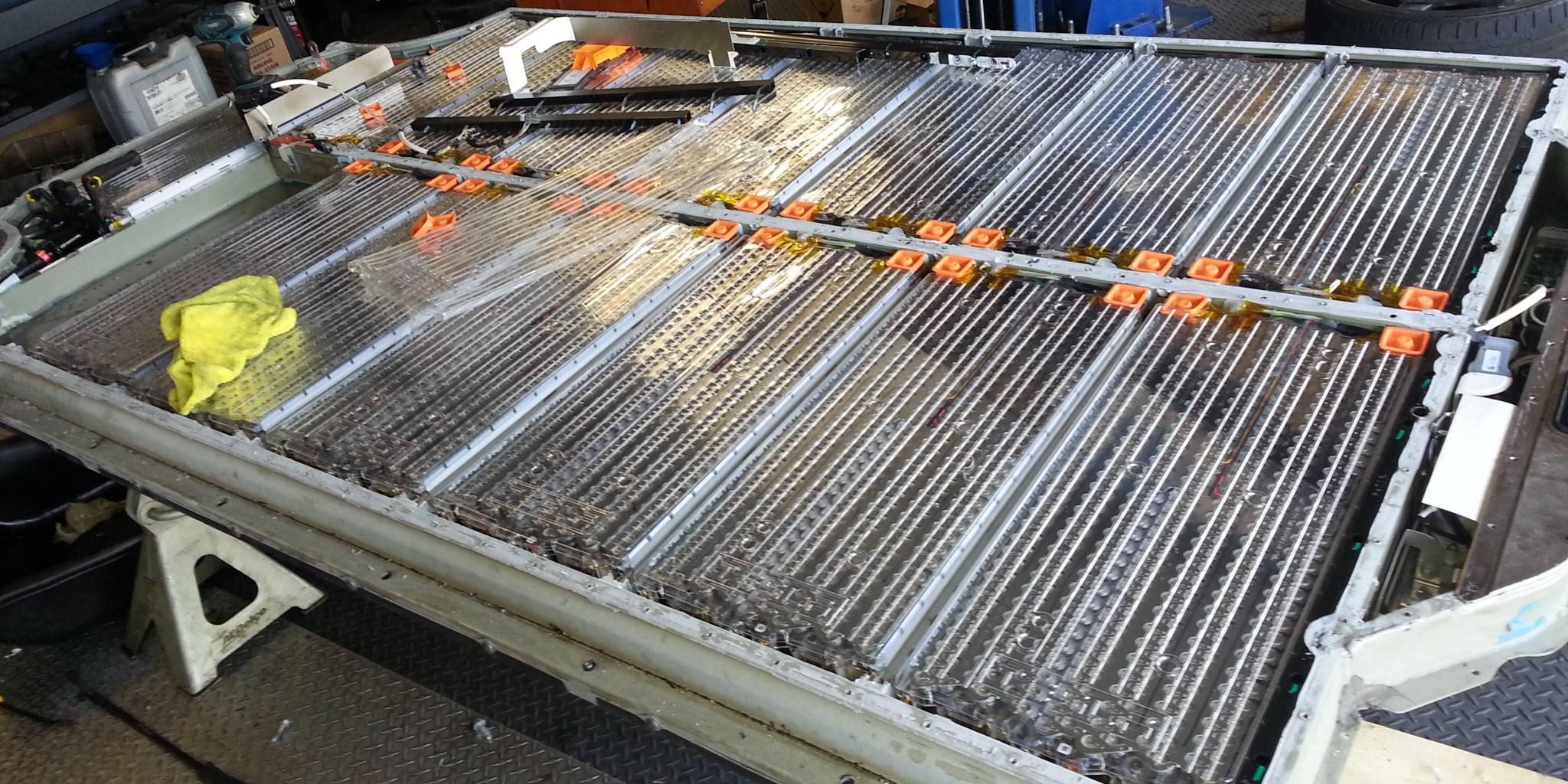 The same is true for Tesla Model 3 basically, although a slightly thicker and taller (custom) cell dubbed 2170 is used instead of the industry statndard 18650.

The advantage claim is a bit more believable for moving parts (as covered in the other answer).

A single car has about 30,000 parts, counting every part down to the smallest screws.

So while one may make valid claims about the superiority of electric cars in various ways, the comparison quoted in the question is just not believable to me.

A typical car requires 20,000 to 30,000 parts, each usually manufactured in a different facility and by different company groups.

HBR does have slightly different view:

So maybe the OP's page is talking about these "functional components" as opposed to parts... but from that HBR page I can't tell how these are defined or counted.

I don't know if any car-industry standards exist for counting "functional components", but a textbook on such decompositions in general (using cars as example), essentially says the number is arbitrary and not related to manufacturing: 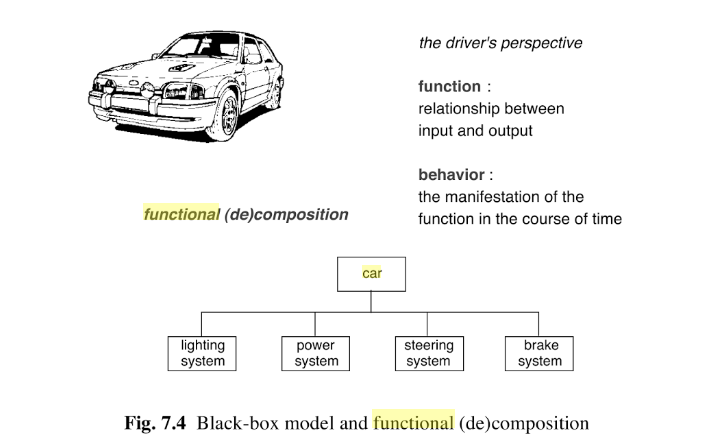 Figure 7.4 exhibits the black-box model of a car. It corresponds with the driver’s perspective on a car. So, the driver is the using system and the car is the used system. Through changing the values of the input variables (e.g., the position of the steering wheel) the driver is able to change the values of the output variables (e.g., the direction of the car). Ideally, as we have seen, the (transfer) function is a mathematical relationship between the input variables and the output variables. However, for most concrete systems, e.g. for cars, this is hardly possible. Therefore, in practice, the notion of function is a rather informal, loosely defined notion of what kinds of (functional) behavior can be caused through manipulating the input variables. In this respect one also often uses the term “functionality”, a term that we prefer to “function”. If the transfer function is too complicated to understand, the technique of functional decomposition can be applied, through which the black-box model of a system is replaced by a structure of submodels of with more readily understandable functions. Figure 7.4 shows a possible decomposition of a car. If a component is still too complicated, it can be further decomposed. The exhibited decomposition of a car could be very helpful for a driving instructor to explain its functionality to a new student. Note, however, that the knowledge that one acquires about a system by means of functional decomposition is only functional knowledge, nothing less and nothing more. The only thing one does in functionally decomposing is help explain the functionality of a system, as we showed for the car example. The idea that functional decomposition ultimately leads to knowing the construction of the system is a widespread misunderstanding.

To elaborate this, a BB model is a purely conceptual division of the function or functionality of a system, independent of its construction and operation. Therefore, one can make virtually any decomposition one likes, and one can freely add or remove functional components.

Britannica has a similar presentation 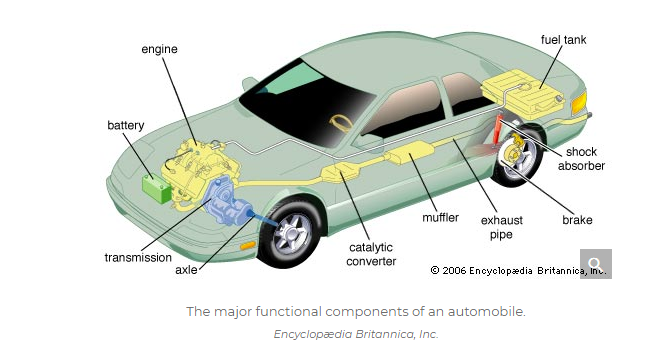 The stuff that ventsyv is talking about is based on these aggregate functional notions rather than actual part counts. In this view a battery is one thing regardless how many cells it has etc.

Finally, does any of this overall part (or subsystem) counting matter in economic terms? I think the answer is no, because a 95-page UBS comparison of internal combustion and electric vehicles never mentions total (or component/subsystem) part count as an economic advantage (either way). It does mention moving/powertrain parts though (extensively):

Mechanical complexity is much lower [in EVs], whereas electronic complexity is higher. We counted 24 moving parts in the Bolt's powertrain, versus 149 in the Golf. The powertrain electronics content is $4k higher on the tier-1 level, motor included.

And it also mentions spare/replaceable parts being fewer in EV's:

Also, revenues from the lucrative spare parts business, which accounts for ~20% of EBIT, are likely to drop by ~60% in the long term in an EV world. However, this scenario is several decades away.

A separate point not to be ignored: Because EVs have much fewer moving and wearing parts, the attractive spare parts business, which represents ~10-15% of an OEM's EBIT, is likely to shrink considerably long-term. However, this should take another 15-20 years longer, due to the replacement cycle of the existing car parc

and one more time

The Bolt is almost maintenance-free. Not only do fewer parts need to be replaced over the car's life, it also does not require a regular change of fluids, such as engine oil. On our analysis, the after-sales revenue pool could drop by ~60% or >$400 per vehicle per year. This should pose a major challenge for dealerships, which typically generate >40% of their gross profit pool in service and maintenance.

But the overall part (or component/system) count at assembly seems irrelevant, at least at this depth of analysis... which is still quite substantial.

The power train is considered cheaper overall in EVs (this is currently offset by the battery in the figure 6 above). 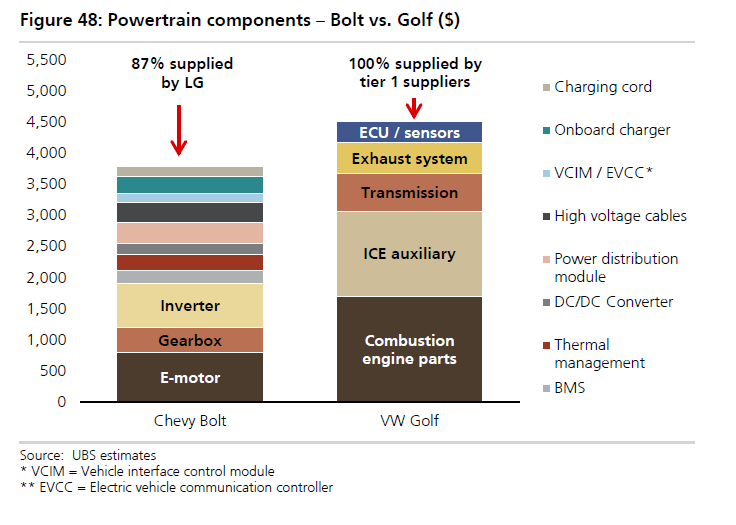 The Bolt's powertrain is much simpler than the Golf's from a mechanical point of view:

This is of course translates into an assembly advantage for the power train:

The motor in a BEV replaces the engine and transmission in an ICE vehicle and will contain a significantly lower number of moving parts. For instance, we expect that electric vehicles will have 6-7 bearings in the drive module (e-motor and mini gearbox) compared to 40-50 bearings in a traditional ICE. [...] We also expect significantly less machining will be required for the e-powertrain vs. conventional ICEs. Our channel checks indicate up to 80% of the cutting tool work needed to manufacture a car happens in the combustion engine. Significantly less machining is required for the e-motor.

The latter is because electric motors' rotor and stator are made of (electrically isolated) stamped laminates (making them of one block is a no-no because of Eddy current losses). They also talk extensively about the battery in EVs and what makes it expensive. They do note that currently there's a substantial overhead of assembling the Bolt battery pack (in Bolt is made of 288 pouches):

Finally, economies of scale and the learning curve in cell and pack assembly should bring further savings. In today's $3,600 pack mark-up, only ~25% relates to materials used. This points to high fixed costs in a sub-scale production environment. We assume a contribution from economies of scale of $10/kWh.

But with all this detailed analysis, it never gets to overall part (or system) count being an economic advantage. They only say that

General assembly is a similar process for BEVs and ICE vehicles.

0
Did farmers adopt cars faster than inhabitants of cities?